Natural gas trading volumes reported to the Mexican energy regulator in August more than doubled over the previous month. 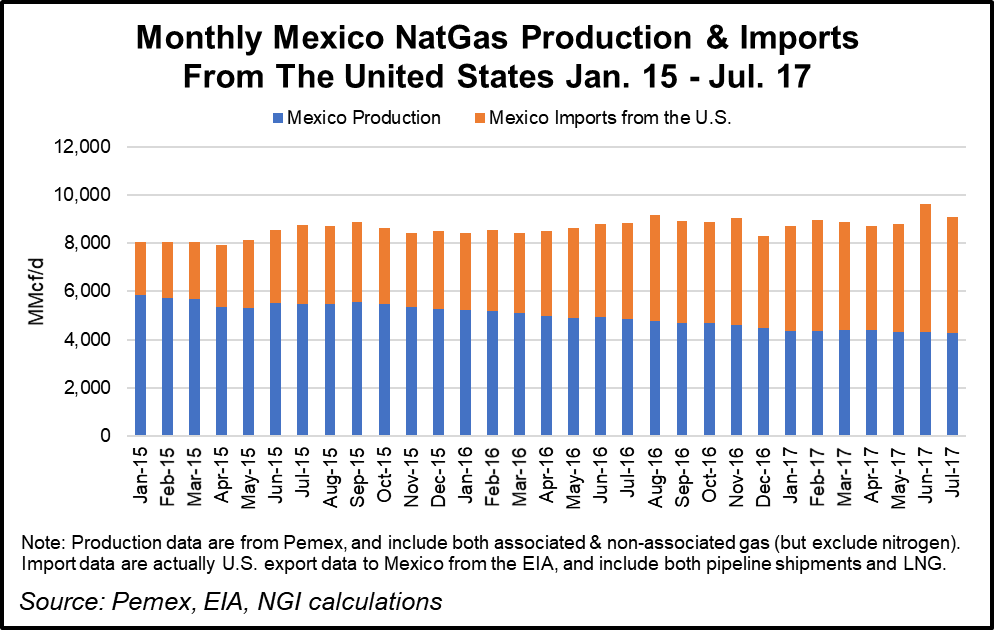 Marketers registered 118 deals with the Comision Reguladora de Energia (CRE) in August, for a total volume of 220.475 Bcf. The August volumes were roughly equivalent to 7.1 Bcf/d, versus 2.89 Bcf/d from 101 deals reported in July.

The number of marketers that reported transactions also increased in August to 17, from 14 in July.

Natural gas demand in Mexico averaged 8 Bcf/d during the first seven months of 2017, according to the energy ministry (Sener). No demand data were available for August as of publication.

Marketing companies in Mexico must submit monthly transaction reports to CRE, which uses the data it collects to generate a monthly gas price index, known as the IPGN.

The latest IPGN, which the regulator released in mid-September, recorded an average price of 72.82 pesos/GJ ($4.31/MMBtu) for August, an increase of 3.37 pesos/GJ (21 cents/MMBtu) from July. CRE must update the index within 15 business days after the close of each month.

The regulator published the first edition of the IPGN in mid-August, showing a price for July. The index is a national average of all transactions carried out in the Mexican natural gas market during each month, incorporating the price per molecule and cost of delivery.

CRE has described the IPGN as nonbinding and expects to discontinue its publication once private price reporting agencies develop Mexico indexes.

To calculate the IPGN for August, CRE screened out four deals that were more than three standard deviations from the average monthly price or volume. The commission does not publish the adjusted volume to ensure the anonymity of the marketers that submit reports.

CRE officials have said that they would eventually like to release regional indexes, once liquid trading hubs emerge in Mexico. They also expect to publish a daily price index when the natural gas market begins to see more short-term trading. For now, most transactions in Mexico are monthly fixed-price deals, according to the regulator.

CRE is also updating its reporting requirements to improve how it collects transactional data from natural gas marketers.

The monthly marketer reports aggregate short- and long-term transactions. However, because of flaws in the reporting rules, CRE is unable determine the transaction type — spot, forward, monthly, etc. — and point of delivery for each deal.

Mexican regulations also stipulate that marketers provide daily reports, which would capture shorter-term transactions, but CRE has indicated that it is currently receiving little information on that front, given the monthly nature of the Mexican gas market.

CRE expects to put the modified reporting requirements out for public comment in October, according to its 2017 regulatory schedule, published in September. The public comment period, overseen by another federal agency called Cofemer, usually lasts 1.5 to 2 months.

The main changes under consideration include consolidating the monthly and daily reports into a single report, updating the requirements to clarify what kinds of deals are being reported and where the gas is being delivered, and eliminating some other variables deemed superfluous.