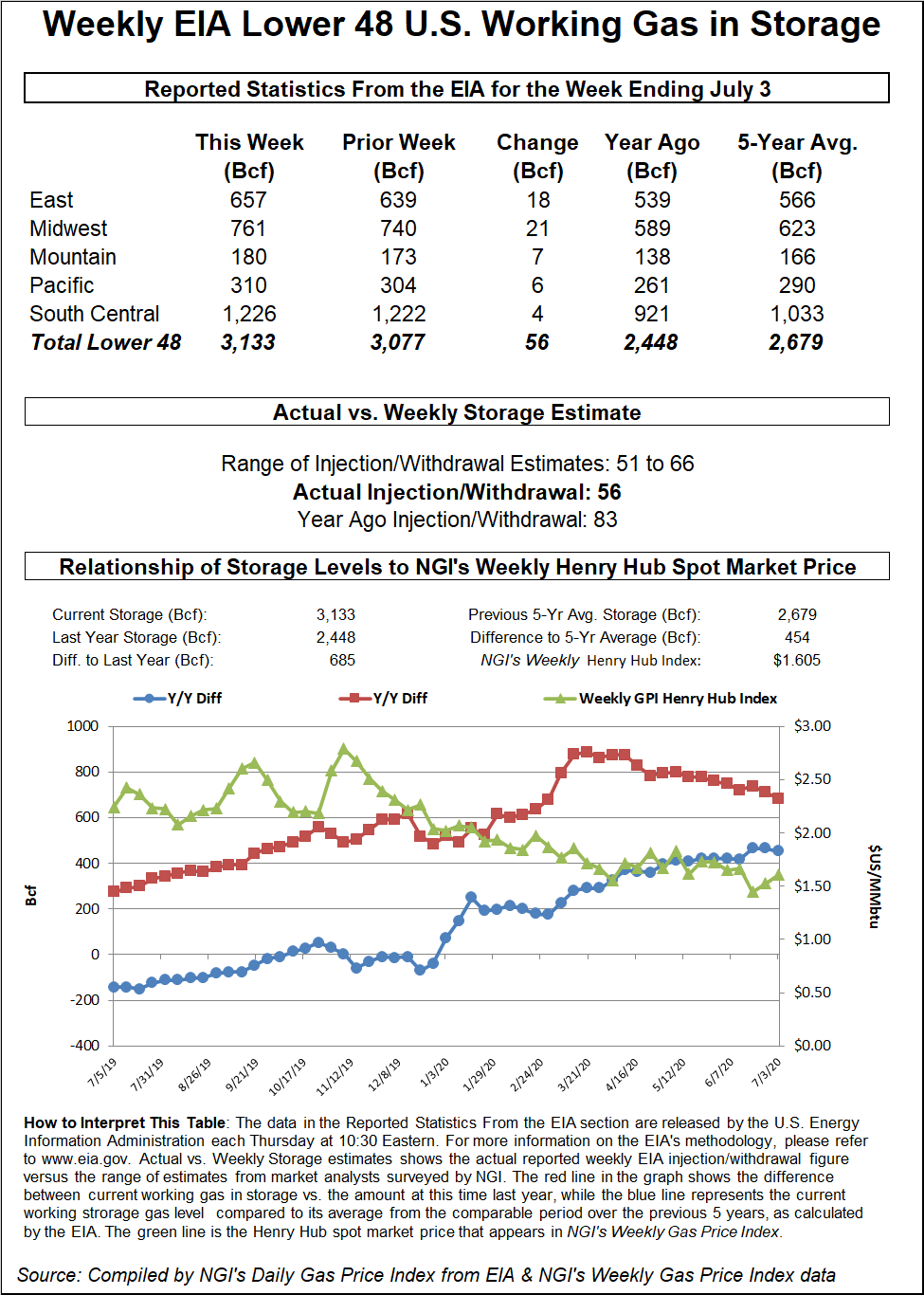 But skepticism about excess supply and export weakness weighed down futures

A slightly bullish storage print and ongoing expectations for strong cooling demand proved too little to offset skepticism about excess supply, export weakness and ongoing fallout from the coronavirus pandemic.

The U.S. Energy Information Administration (EIA) on Thursday reported an injection of 56 Bcf natural gas storage for the week ending July 3. The topline figure was modestly below the average expectations of major polls, and analysts said summer heat and increased cooling needs were helping to address supply/demand imbalances caused by the pandemic’s harsh toll on economic activity.

The latest result compares with an 83 Bcf storage build in the same week in 2019 and a five-year average injection of 68 Bcf. EIA last Thursday reported a 65 Bcf injection for the week ended June 26.

But balance improvements are coming slowly and remain highly reliant on soaring temperatures and elevated air conditioner use, analysts said, as economies both domestic and abroad remain soft. With light economic activity, commercial and industrial energy use remains weak relative to pre-pandemic levels, and that in turn has dampened European and Asian demand for U.S. liquefied natural gas (LNG) exports – a key driver of gas demand prior to the virus’ onset.

“With dormant commercial and industrial demand this summer, weather will play an outsize factor on nearby price direction,” said one participant on The Desk’s online energy platform Enelyst.

“Balance-wise, this is a strong number, in our view, in terms of what is needed to avoid containment” in the fall, Bespoke Weather Services said of the 56 Bcf injection. “But we need to sustain a strong weather pattern to continue offsetting the impact of very low LNG volumes, which are likely here to stay for a while.”

Importantly, robust heat looks likely. Bespoke said that, despite previously projecting a record number of gas-weighted degree days (GWDD) for July, the forecast “moved even hotter” Thursday as “guidance depicts a massive upper level ridge taking shape over much of the nation. … Odds continue to increase that we will rack up enough GWDDs to set the record for the hottest July in our dataset, beating out 2011, even if the current 15-day is a little too hot in the modeling.”

Power burns “will remain strong for the foreseeable future, given how hot the forecast looks. Usually in summer, weather is not nearly as strong of a force in driving price action, but when at levels as extreme as this one, it is impossible to ignore,” the firm added.

Genscape Inc. said that, as of the evening cycle for Thursday, LNG feed gas demand from interstate pipelines had fallen to 2.8 Bcf/d, nearly 1.1 Bcf/d less than June’s average. Export demand recovery is precarious alongside a resurgence of virus cases in the United States and globally.

At the same time, there are signs that production, down for months in the wake of coronavirus demand destruction, is beginning to flatten broadly and increase in some regions. Associated natural gas production in early July from major U.S. shale plays is reportedly at its highest level since early May, with producers restoring shut-in oil production.

Enverus analysts said that, after hitting lows in May, natural gas pipeline data, which reflects roughly three-fourths of total gas produced in the United States, show production declined from 71 Bcf/d in January to 65.7 Bcf/d in May. As of June 23, production averaged 65.1 Bcf/d.

The storage build for the July 3 week lifted inventories to 3,133 Bcf, well above the year-earlier level of 2,448 Bcf and above the five-year average of 2,679 Bcf.

Clearview Energy Partners LLC on Thursday noted that, in its July 2020 Short Term Energy Outlook (STEO), the EIA forecasted U.S. working gas storage to reach 4,039 Bcf at the end of October, a record monthly total and just 5% below the EIA’s estimate of peak capacity.

“We believe U.S. gas storage within this range of capacity could be problematic since inventories might exceed the EIA’s forecasts” because of uncertain U.S. supply/demand, low U.S. LNG exports, trade tension with China and low global gas/LNG prices backing up supply into storage. We believe regional gas price discounting could ensue if gas in storage approaches capacity limits.”

“National demand will remain strong the rest of the week due to widespread highs of 90s extending from Texas to Chicago and across Mid-Atlantic, pushing national power burns to +42-44 Bcf/day,” NatGasWeather said. “Cooler exceptions continue across the Northwest with highs of 70s to 80s, and across the Southeast due to a stalled weather system, where highs will reach the mid-80s to near 90. However, this will be offset by very strong high pressure over Texas, the Southern Plains and the Southwest, where highs will easily reach the 100s.”

In pipeline news, Sabal Trail on Wednesday lifted a force majeure that was declared on June 26 because of an unplanned outage at its Alexander City, AL, compressor station. Genscape said capacity at Alexander City was reduced to 750 MMcf/d for the majority of the force majeure, but capacity had been restored to 995 MMcf/d. Flows were cut by as much as 230 MMcf/d, the firm said, but flows had recovered to 844 MMcf/d by Thursday.