The U.S. Energy Information Administration (EIA) on Thursday reported an injection of 55 Bcf natural gas into storage for the week ended July 9. The result was above most analyst expectations and sent natural gas futures lower initially, though the prompt month quickly rebounded. 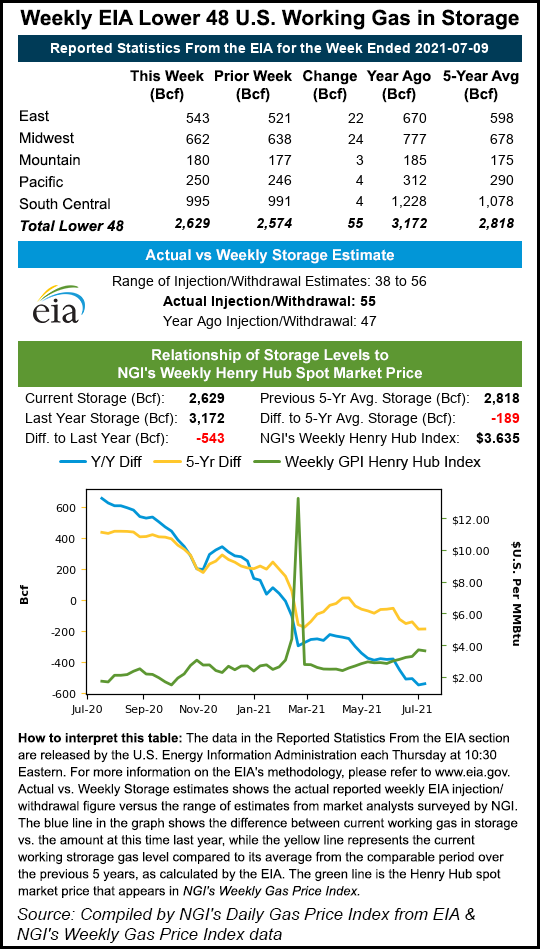 “It was hotter than normal over the western and northern U.S., while warm to very warm, unsettled and humid over the southern and eastern U.S.” during the latest EIA report period, according to NatGasWeather.

Still, the long Fourth of July weekend kicked off a short work week for many Americans, the firm noted. This likely cut into industrial and commercial demand during the week.

Prior to the report, major surveys pointed to a build in the upper 40s Bcf, in line with historical norms.

A Bloomberg survey showed injection estimates ranging from 39 Bcf to 53 Bcf and a median of 49 Bcf. Reuters’ poll of analysts found estimates spanning 38 Bcf to 56 bcf, with a median injection of 48 Bcf.

The 55 Bcf result eclipsed the year-earlier increase of 47 Bcf and the five-year average 54 Bcf injection.

The build for the July 9 week lifted inventories to 2,629 Bcf. That compared with the year-earlier level of 3,172 Bcf and the five-year average of 2,818 Bcf.

Bespoke Weather Services said that even though the build for last week was bearish relative to median expectations and the similar week in 2020, inventories were still light for this time of year.

“The market believes production will show up as we move forward, and there will be gains, but they need to hurry up and show, or we still are at risk of higher prices due to a precarious storage situation,” Bespoke said.

The firm noted that production estimates have hovered around 90 Bcf this week – off the recent highs around 92-93 Bcf in June. It said output would need to return to June levels and hold there this summer to ensure supply/demand balance next winter.

For the July 9 week by region, the Midwest and East led with builds of 24 Bcf and 22 Bcf, respectively, according to EIA.

The South Central build of 4 Bcf included a 7 Bcf injection into nonsalt facilities and a withdrawal of 3 Bcf from salts.

Looking ahead to next week, several analysts on Enelyst predicted a build in the mid-40s Bcf. Bespoke preliminarily predicted an increase of 40 Bcf.