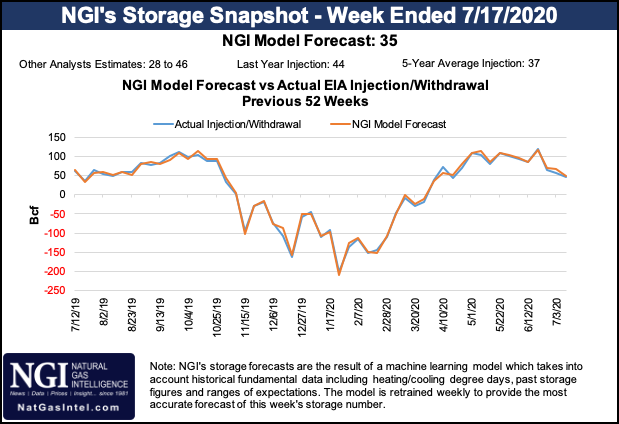 The U.S. Energy Information Administration (EIA) on Thursday, for the period ending July 17, is expected to report a sub-100 Bcf injection of storage for the fourth consecutive week.

The forecasts compare with a 44 Bcf storage build in the same week last year and a five-year average increase of 37 Bcf.

A mid-30s Bcf injection into stockpiles also would extend to four straight weeks a trend of builds below the five-year average. The EIA reported an injection of 45 Bcf natural gas storage for the week ending July 10.

Above-normal temperatures over late June and much of July, combined with gas prices that were driven lower following decreased energy needs that emerged amid the coronavirus pandemic, have increased power burn demand and cut into surpluses. At the same time, U.S. gas production, while up from the lows of last spring, has hovered recently near a modest 85 Bcf/d, with an anticipated return of associated gas production yet to fully develop.

Prior to the injection estimates, the August contract started Wednesday in the red and hovered there during morning trading as weather forecasts, while still predicting widespread summer heat, continued to call for modestly lower temperatures than they did last week.

Bespoke Weather Services said its outlook showed evidence of a “cooler trough” moving into the eastern half of the nation late this month into early August. “We believe this is temporary and that heat can return to the East as we move deeper into August, but the cooler momentum may not be finished yet,” the forecaster said. “As such, we remain on the cool side of guidance.”

Despite the cooler trends, Bespoke said it still projects above-normal gas-weighted degree day totals for the next 15 days. Markets have for weeks viewed lofty temperatures as necessary to drive cooling demand and sop up excess gas in storage ahead of the fall to avoid containment challenges.

Concerns stem from the commercial and industrial demand destruction caused by the pandemic.

While states across the United States lifted restrictions imposed to slow the spread of the virus and the domestic economy showed signs of a rebound in May and June — a development that, if sustained, would bolster energy demand — new outbreaks of the virus have since led to a resurgence in cases that threatens to derail the recovery. Several states and cities have paused business reopening plans, and some have ordered new restrictions. California, Florida and Texas — three of the most heavily populated states in the country – have, for example, reinstated restrictions on indoor events and group activities.

“A retreat in states’ reopening directives will likely have a dampening impact on the recovery,” said chief economist Scott Brown of Raymond James & Associates Inc. “Risks to the economic growth outlook remain weighted to the downside.”

As earnings season gets underway this week in the oil and gas sector, analysts are broadly expecting results to reflect the tenuous economic backdrop.

Cash prices fell across much of the country amid modest respites from the intense heat of recent weeks, extending a trend that has spanned the current week.

In addition to cooling trends in parts of the Lower 48, forecasters are closely tracking severe storm activity ahead of the heart of hurricane season.

The National Hurricane Center (NHC) said Wednesday Tropical Storm Gonzalo formed early Wednesday in the Atlantic Ocean. With potential for winds of 75 mph or more, NHC projected the storm would become a hurricane Thursday, though it remained far from land and was more than 1,000 miles east of the Windward Islands.

“Gonzalo is expected to move near or over the southern Windward Islands this weekend and could bring direct impacts from winds and heavy rainfall,” NHC said.

In the Pacific Ocean, Tropical Storm Douglas strengthened into a hurricane Wednesday morning. Douglas had winds of 75 mph and was about 1,700 miles from Hawaii.

It could potentially impact Hawaii on Sunday, though probably after it weakens back to a tropical storm, according to the NHC.

In the Midwest, where losses were widespread but generally moderate, Defiance shed 4.5 cents to $1.530.