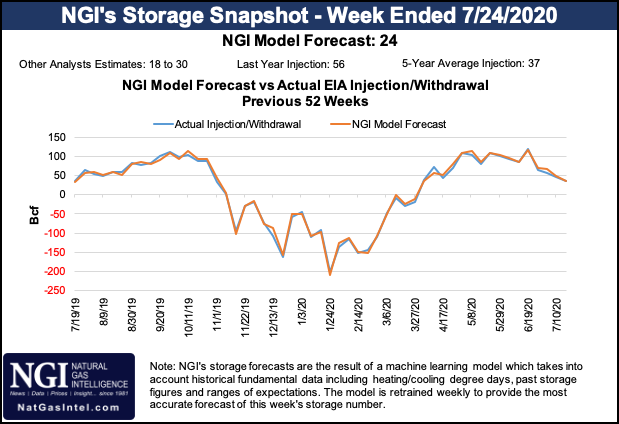 The August Nymex contract settled at $1.854/MMBtu, up 5.4 cents day/day. After the close, the August contract rolled off the board. September climbed 6.6 cents to $1.930.

With intense summer heat and cooling demand strong in the covered week, major polls pointed to an injection in the 20s Bcf for the Energy Information Administration’s (EIA) next storage report. The report, to be released Thursday, covers the week ending July 24.

A Bloomberg survey showed a median prediction of 23 Bcf based on estimates ranging from 18 Bcf to 30 Bcf. A Wall Street Journal poll found a low estimate of 18 Bcf and a high of 33 Bcf, with an average of 25 Bcf. NGI predicted a build of 24 Bcf.

The forecasts compared with the 56 Bcf build for the same week a year earlier and the five-year average injection of 33 Bcf, according to EIA.

Energy Aspects issued a preliminary estimate for an 18 Bcf injection for the period. The firm estimated a 3.8 Bcf/d week/week increase in power burn. “Gas burn bumped against our cap of 48.0 Bcf/d on several days” during the covered week amid “intense heat” in the Northeast, it said. “The falling injection rate comes despite a sharp increase in Lower 48 production, of 0.8 Bcf/d week/week.”

Analysts said an even lower result for the latest covered week would suggest that robust cooling demand in July would help ward off containment challenges in the fall, though a resurgence of the coronavirus pandemic and continued lackluster liquefied natural gas (LNG) demand complicate the outlook.

“With nearly four months of injections still to go, supplies remain on track to be near 4 Tcf by the end of the refill season,” NatGasWeather said Wednesday. Up to this week’s report, at least, “supply continues to run greater than demand under normal weather conditions. This again shows further declines in production or increases in exports and demand are going to be needed to tighten the supply/demand balance enough to reduce hefty surpluses.”

Heading into August, Bespoke Weather Services said Wednesday’s forecasts trended cooler, as they had the previous day, lowering gas-weighted degree day expectations for next week and “showing a less favorable pattern for notable heat” in the following week.

“Cooler weather next week makes sense given the rise in global angular momentum, marking the atmosphere’s move away from the hotter La Nina base state,” the forecaster said. “Our view is that this is temporary, and above-normal temperatures can regain the upper hand into the middle third of August, which may still work out, but for now, models are less adamant about this.”

Heat-driven demand through the summer is critical for gas prices because, with coronavirus cases on the rise domestically and abroad, economic softness persists, clouding near-term commercial and industrial energy demand outlooks. By extension, LNG export activity remains light relative to pre-pandemic levels, including to key U.S. export destinations in Europe and Asia.

But one bright spot on the export front has emerged this summer. As Genscape Inc. noted this week, U.S. pipeline supply to Mexico reached highs during the July 20-24 period. The United States exported nearly 6.4 Bcf/d to Mexico, the firm said, marking the strongest five-day period on record.

“North American natural gas markets have been upended this year by a multitude of events, chief among them the plunge in crude oil prices and a dramatic drop in LNG exports,” RBN Energy LLC analyst Jason Ferguson said. However, “things are looking up” in Mexico.

“Total exports across the border have reached new highs this month, with just-completed infrastructure in Mexico assisting in the jump. Perhaps things are getting back to normal, at least in this small corner of the energy markets.”

Spot prices varied across the Lower 48, with big advancers earlier in the week in parts of both the East and West giving back some of their gains, along with relatively modest increases in the Midwest and Texas.

Demand has been strong amid intense heat in parts of the East and in California, notably including at SoCal Citygate, where prices had surged Tuesday and reached their highest level since February, according to Genscape. The National Weather Service forecasts highs in the 90s for much of southern California the rest of this week.

Meanwhile, Potential Tropical Cyclone Nine in the Atlantic was projected to evolve into Tropical Storm Isaias late Wednesday or early Thursday on a path that would take it near Puerto Rico and Cuba before reaching the Florida Straits as soon as Friday, according to the National Hurricane Center.