Natural gas futures climbed even higher on Friday, extending to six days a furious demand-driven rally that sent the prompt month to a close above $4.00 for a second session. The August Nymex contract rose 5.7 cents day/day and settled at $4.060/MMBtu, its highest mark since 2018. September gained 6.0 cents to $4.042. 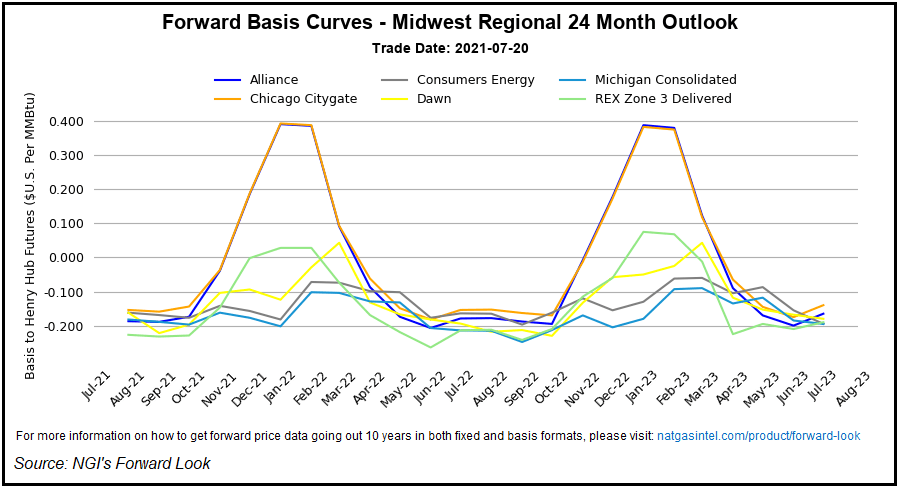 NGI’s Spot Gas National Avg. picked up 2.0 cents to $3.805. A weather system delivered rain and comfortable highs of 70s and 80s to the Great Lakes region and parts of the East, National Weather Service data showed. But it remained hot with highs of mid-80s and 90s in the South and highs of 90s and 100s over swaths of the Midwest and West, generating solid cooling demand.

It has been particularly hot this week in portions of the Upper Midwest and northern Plains, with highs in the upper 90s as far north as the Dakotas and triple-digits highs expected over the weekend.

The American and European weather models trended in opposite directions early Friday for the first week of August, with the American dataset adding to heat expectations and the European data shifting cooler, creating some uncertainty about the intensity of demand early next month.

But an extension of high pressure in the week ahead is expected to produce lofty highs over much of the country, providing potential for further rallying in futures and cash prices in the final week of July.

“We still have plenty of heat on the way…including the hottest of the summer in Texas,” Bespoke Weather Services said.

The firm noted that production estimates edged slightly higher Friday, near 91.5 Bcf, but were still off from recent highs above 92 Bcf. On the demand side, in addition to domestic weather, liquefied natural gas (LNG) export levels hung near the robust 11 Bcf level, boosted by persistent demand from Asia and Europe, while pipeline send-outs to Mexico hovered near 7 Bcf.

While not as influential overall as LNG, Mexican demand is providing substantial support for natural gas prices this year, the U.S. Energy Information Administration (EIA) said in a research note Friday.

“Over the past few years, Mexico has expanded its natural gas pipeline infrastructure and has relied increasingly on imported natural gas from U.S. pipelines,” EIA researchers said. Pipeline imports accounted for 76% of Mexico’s total natural gas supply last month, compared with 40% in June 2015.

U.S. natural gas pipeline exports to Mexico averaged 6.8 Bcf/d in June 2021, up 25% from June 2020 and 44% more than the previous five-year (2016–2020) monthly average, EIA said. “We expect these record-high flows, which were driven by increased power demand, high temperatures and greater industrial demand in June, to continue through the summer,” researchers said.

With multiple catalysts at work, EBW Analytics Group said Friday that the futures rally could continue. “With intense heat expected early” in the coming week, “nationally as well as in Texas, and strong LNG feed gas flows and exports to Mexico, Henry Hub is likely to set new highs for the summer, supporting Nymex futures,” EBW analysts said.

Analysts said the combination of demand strength and modest production could leave storage light at the end of the summer. Analysts at The Schork Report said the refill of storage to date in 2021, midway through the traditional injection season, is 12% below the five-year average and 24% below last year’s pace.

EIA on Thursday reported an injection of 49 Bcf natural gas into storage for the week ended July 16, higher than the mid-40s Bcf print analysts reporting to major surveys had estimated. In the similar week a year earlier, EIA recorded a 38 Bcf build, while the five-year average injection is 36 Bcf.

Analysts at Tudor, Pickering, Holt & Co. said supply/demand imbalance could persist through the summer. They pointed to the “warmer-than-average weather” and few signs that coal could supplant gas as prices climb.

Thus far “coal generation has failed to pick up materially and gas’ share of the thermal stack has remained resilient at around 60%,” the analysts added.

Spot gas prices advanced for the fourth time in the trading week, led higher by lofty temperatures and price increases throughout the nation’s midsection.

High temperatures in the 90s galvanized air conditioner use from Minneapolis to Chicago to Dallas.

National demand was forecast to intensify early in the upcoming trading week as the hot ridge over the west-central United States moved eastward with highs of 90s to low 100s, impacting most of the country, besides 80s across the Great Lakes and Northeast, NatGasWeather said.

While cooler air could descend from Canada, heat was generally expected to persist into the first week of August, the firm added, with upper 80s to 100s across the West, Midwest, Plains and the southern United States.

Meanwhile, AccuWeather meteorologists warned Friday “a broad area of disturbed weather that was slowly spinning over the warm waters of the Gulf Stream just east of Florida and north of the Bahamas” had the potential to gradually develop into a tropical depression by Monday.

If it does develop into a tropical storm, it would get the next name on the list of tropical storms for the 2021 Atlantic hurricane season, Fred, AccuWeather noted. There have been five named systems so far this year over the Atlantic.