Natural gas futures on Monday cruised higher for a second consecutive session as forecasts pointed to stronger weather-driven demand over the back half of July. 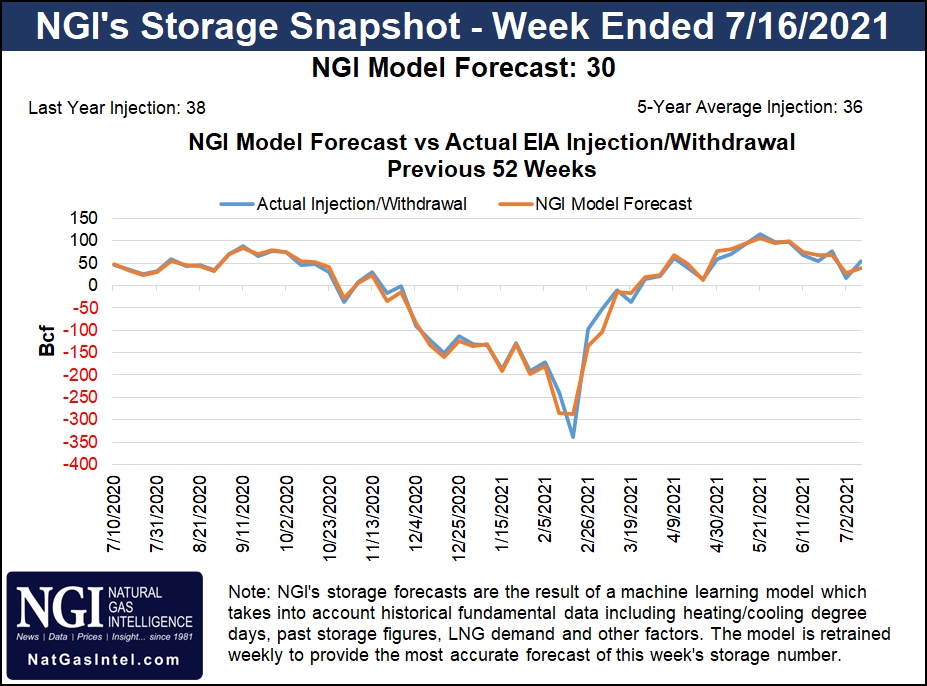 The August Nymex contract advanced 10.5 cents day/day and settled at $3.779/MMBtu. The prompt month had gained 6.0 cents on Friday to close out trading last week. The September contract rose 9.6 cents to $3.754 on Monday.

NGI’s Spot Gas National Avg. jumped 24.5 cents to $3.730, with gains across every region of the country to start the week.

Bespoke Weather Services noted a shift in forecasts Monday to stronger heat than what outlooks showed prior to the weekend.

“The change was not large” in terms of total gas-weighted degree days, “but there are some notable shifts on the regional level, as the lower Midwest down to Texas appears set to finally see some heat after quite a tame period in recent weeks,” Bespoke said. “We are projecting highs in Dallas, for example, to reach the 100 degree mark a few times in the medium range, something of course not uncommon for this time of year, but definitely a change from what we have been seeing.”

The “most persistent, strongest anomalous heat stays in the north-central U.S.,” the firm added. “All in all, these changes take us closer to the five-year normal for the 15-day period as a whole.”

Notably, the last five-year period was among the hottest on record.

Production has varied in July, with daily estimates ranging between 89 Bcf and 92 Bcf, impacted sporadically by summer maintenance work. Bespoke said output may need to exceed 92 Bcf over the back half of summer to offset strong demand.

“On the fundamentals side, our thesis remains that we just do not have the production necessary to alleviate storage concerns,” Bespoke said. “Yes, we did rise to 91.5 Bcf/d over the weekend, but we need to get back to and even make new 2021 highs as we move forward in order to feel more comfortable, especially with a pretty consistent 17-18 Bcf/d in total exports, which could grow slightly in the fourth quarter.”

The early estimates compare with a 38 Bcf build in the year-ago period and a five-year average injection of 36 Bcf.

LNG feed gas hovered between 10.5 Bcf and 11 Bcf during the covered week, NGI estimates show. Domestic demand was fueled during the week by hot upper high pressure that held over the East most of the week, with highs of mid-80s to 90s. It was also hot over the West, Texas and the Plains, with highs ranging from the 90s to 110s, NatGasWeather said. The firm expects a build for July 16 week in the range of 36 Bcf to 44 Bcf.

The U.S. Energy Information Administration (EIA) last Thursday reported an injection of 55 Bcf natural gas into storage for the week ended July 9. The build lifted inventories to 2,629 Bcf. But that was well below the year-earlier level of 3,172 Bcf and the five-year average of 2,818 Bcf.

“We expect deficits versus the five-year average will hold near 200 Bcf into the start of August,” NatGasWeather said.

Spot gas prices advanced on Monday, led higher by surging demand and prices in the West.

Temperatures ascended into the triple digits in Las Vegas and Phoenix as well as the deserts of California.

NatGasWeather said demand for the rest of this week could vary by region.

“One weather system will bring showers and comfortable highs of 70s and 80s to the Great Lakes and Ohio Valley this week, while a second system stalls across the southern U.S. with heavy showers but still very warm with highs of mid-80s to near 90,” the forecaster said. “Hot high pressure continues over the West into the Plains with highs of 90s and 100s. Overall, moderate demand over much of the eastern half of the U.S., while strong over the West and Plains.”

Next week, NatGasWeather said upper high pressure will maintain very warm to hot highs of upper 80s to 100s across the West, Midwest and Plains. “It will be very warm, showery and humid across the southern U.S., while the Great Lakes and Northeast “will be near normal as weather systems bring areas of showers and seasonal highs of 70s and 80s.”

On the pipeline front, Wood Mackenzie noted that maintenance work on El Paso Natural Gas Pipeline could cut Permian Basin outflows on the South Mainline in Texas this week, constraining gas leaving the basin westbound. “Capacity will be limited to 935 MMcf/d, which is 150 MMcf/d below the previous 30-day average,” Wood Mackenzie analysts said Monday. The work is scheduled to begin on Tuesday and continue through Friday. Prices in West Texas forged ahead on Monday. El Paso Permian rose 9.5 cents to $3.510 and Waha tacked on 11.5 cents to $3.510.