Natural gas futures rebounded on Friday, following three straight daily losses, as traders mulled the potential for paltry levels of stockpiles ahead of the withdrawal season later this year. 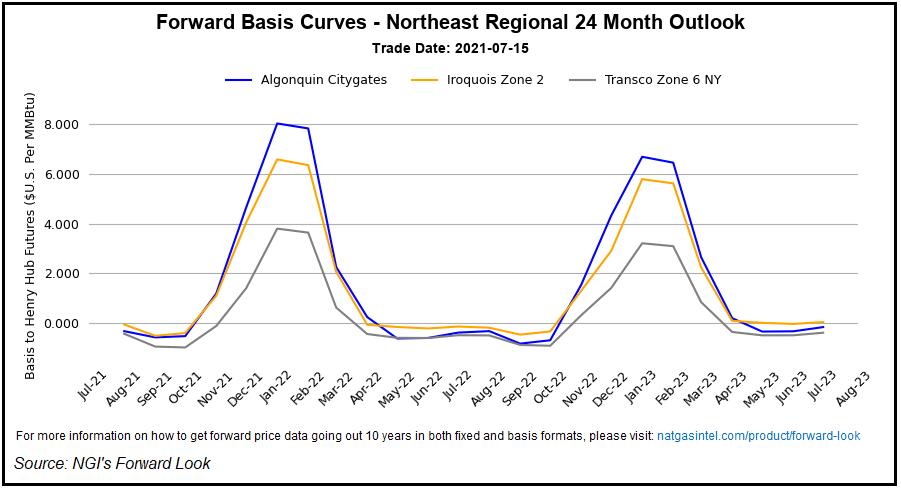 NGI’s Spot Gas National Avg., however, fell 13.5 cents to $3.485, as next-day prices dropped in the Northeast ahead of an anticipated cool down.

The Energy Information Administration (EIA) on Thursday reported an injection of 55 Bcf into U.S. natural gas storage for the week ended July 9. The result exceeded expectations for a build in the upper 40s Bcf, and it also eclipsed the year-earlier increase of 47 Bcf and the five-year average 54 Bcf injection.

Strong liquefied natural gas (LNG) levels, fueled by Asian and European demand for U.S. exports, continued to help drive the demand side of the equation as well. LNG feed gas volumes hovered near 11 Bcf on Friday, according to NGI data.

EIA’s 55 Bcf injection left the market roughly 3 Bcf/d tighter than the five-year average when compared to degree days and normal seasonality, according to Wood Mackenzie analyst Eric Fell. This included an estimated 14 Bcf of demand impacts from the Fourth of July holiday.

“Three of the last four weeks have appeared tight by between 3-4 Bcf/d,” Fell said Friday. “These three tight weeks have corresponded with nuclear/renewable generation realizing at or below the prior five-year average, cutting against the trend of growth in nuclear/renewable generation that we have seen over time and in 23 of the 27 weeks in 2021.”

Analysts at Tudor, Pickering, Holt & Co. (TPH) noted weaker power generation and industrial demand during the EIA report week, likely owing to the holiday-shortened work week. However, power generation is back this week. The analysts said that would trend “in line with the five-year average,” with the gas share of thermal generation “hanging out in the roughly 60% range in recent days — in line with our modeling at current pricing levels.”

Outside of power generation, TPH said Lower 48 dry gas output has come in below its 93 Bcf/d forecast. It has dipped to around 90-91 Bcf/d recently on an upstream outage on the Columbia Gas Transmission system affecting Marcellus Shale volumes.

Bespoke Weather Services also cited relatively light production and said that, with summer demand still solid and expected to extend into September, storage levels could prove dangerously light by the start of the withdrawal season in November. It noted that output hung near 90 Bcf Friday, “which, in our view, remains insufficient to alleviate storage concerns, even with the current weather pattern.”

The 15-day weather outlook trended cooler over the past week, though expected average temperatures still sit in the middle of the five-year average – and the last five years have been among the hottest on record.

“Best heat in the pattern lies from the northern Plains back into the interior West, though even in the West, any upcoming heat is nothing like what has been seen out there in previous weeks,” Bespoke said, noting record highs across the deserts of the Southwest as well in the Northwest.

NatGasWeather also noted that cooling-degree days declined in forecasts through the week, yet demand remains “slightly bullish after being solidly bullish.”

Heat reigned over much of the country. Temperatures in the 90s continued to bake parts of the Great Plains and most of the West. There were triple-digit highs in the Southwest, including in Las Vegas and Phoenix, according to National Weather Service (NWS) data.

Highs in the 90s were found throughout much of the Northeast, as well, including New York City and Boston. However, a weather system that had brought moderate highs in the 70s to the Great Lakes was expected to push into the East and curb demand there by the start of the next trading week, NWS forecasts showed.

Against that backdrop, Northeast prices dropped and dragged down the national average.

Elsewhere, cash traded in mostly narrow ranges, though prices remained volatile in the West. Heat cooked much of the region. Dozens of wildfires also forced hundreds of evacuations that caused some residential and commercial demand interruptions and price retreats at key hubs.

On the pipeline front, Rockies Express Pipeline (REX) said it was dealing with an operational issue that was expected to limit westbound flows in Ohio starting Friday and continuing until further notice. The issue was tied to two units at the Chandlersville Compressor Station. REX idled both units.

Wood Mackenzie analyst Anthony Ferrara said based on recent activity, “we could see flow cuts of up to 112 MMcf/d” while the two units are down.