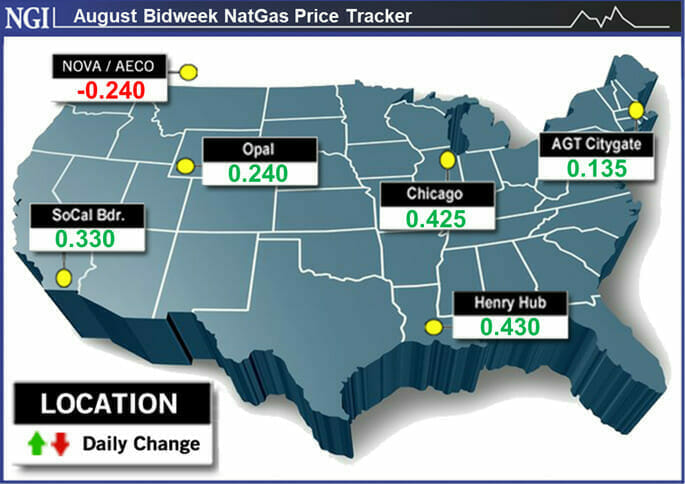 It marked a distinct diversion from a year earlier, when the pandemic weighed on the demand outlook. The 2020 Bidweek National Avg. for August came in at only $1.680.

Conditions during the covered week from July 26 to 30 were defined by intense heat in the West and across most of the nation’s midsection, according to NatGasWeather. Temperatures in the 90s and low 100s permeated much of the western half of the country. While bouts of cooler air were forecast in the Midwest and East this week, outlooks called for a resurgence of heat in the second week of August.

Much of the country “will become very warm to hot,” NatGasWeather said, “as upper high pressure rules large stretches of the U.S., with highs of mid-80s to 100s. There will be areas of heavy showers, focused over the central and southern U.S., but rather humid to drive strong demand.”

At the same time, LNG feed gas volumes continue to hang near 11 Bcf – within striking distance of record levels. Demand from both Asia and Europe, where storage levels are depleted, is steady and expected to continue driving demand for U.S. exports of the super-chilled fuel. Pipeline exports to Mexico also are holding at consistently solid levels this summer.

StoneX Financial Inc.’s Thomas Saal, senior vice president of energy, told NGI that export strength in concert with summer heat could propel further surges in price momentum in August — both cash prices and futures. “Weather is always important, but when you have the consistent demand for LNG that we’ve seen this summer and expect to continue to see, demand looks to hold strong,” he said.

Bidweek prices advanced across the country and jumped higher in several regions.

The August Nymex contract rolled off the board with a final settlement of $4.044 on Wednesday – near the highest level since 2018. The September Nymex contract took over as the prompt month on Thursday and spiked further, rising 9.2 cents that day and closing at $4.059/MMBtu.

The U.S. Energy Information Administration (EIA) reported on Thursday an injection of 36 Bcf natural gas into storage for the week ended July 23. The print fell shy of expectations found in major polls and punctuated concerns about waning supplies for the coming winter. Prior to the report, the medians of major surveys landed around a build of 42 Bcf. NGI modeled a 49 Bcf injection for the period.

“Supply/demand balances remain too tight, and that likely will remain the case until we see significant gains in production. Weather of course remains important, and we should see better heat in the pattern, relative to normal,” next week, Bespoke Weather Services said. “Ultimately, price risks remain skewed to the upside until we are able to loosen balances.”

The firm noted that production held close to 91 Bcf in July. That was below the 92 Bcf/d average in June and well below the roughly 93 Bcf/d level Bespoke said may be necessary to keep pace with strong power demand and exports.

But with output light, exports strong and forecasts calling for the return of intense heat next week, analysts say bullish undercurrents abound for futures.

The next EIA storage report could prove another near-term catalyst for futures, the EBW team said. Early estimates call for a relatively paltry increase below 20 Bcf. NGI estimated an injection of 17 Bcf for the week ended July 30.

With “a very small injection expected to be reported on Thursday, and the winter-month contracts and rest of the 2022 strip likely to show continued strength,” the September contract could rally in the days ahead, EBW said.

The September Nymex futures contract settled Monday at $3.935, up 2.1 cents from Friday’s close.