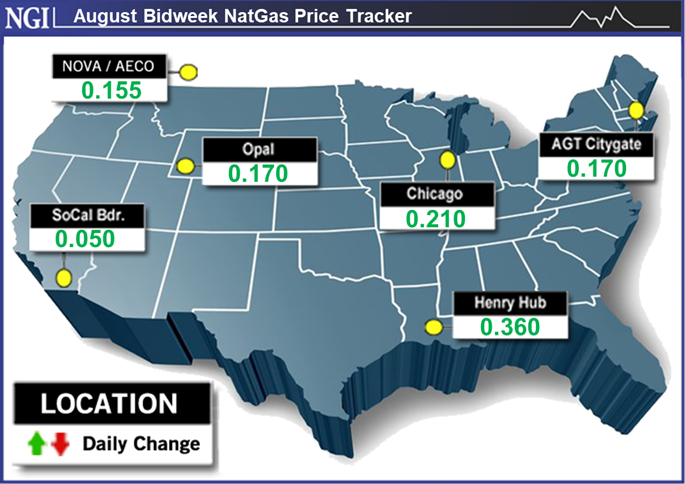 The August Nymex natural gas futures contract rolled off the board last Wednesday at $1.854, up 5.4 cents day/day as the market braced for a light storage report for the week ending July 23 and welcomed news of robust U.S. export activity to the south.

Genscape Inc. noted that U.S. pipeline supply to Mexico reached highs during the July 20-24 period. The United States exported nearly 6.4 Bcf/d to Mexico and set a record for a five-day period.

“The overall surge in U.S. exports to Mexico indicates that the latter’s demand for gas continues to recover from the disruptions caused in April and May” by the coronavirus, Genscape analyst Ricardo Falcon said.

But the September contract stumbled last Thursday and Friday. Uncertainty imposed by the pandemic, including about the future direction of liquefied natural gas (LNG) exports to Europe and Asia, pressured the new front month. Markets absorbed worries that, when summer heat fades, there may be no prominent catalyst for demand to replace it, raising the specter of containment challenges in the fall.

The U.S. Energy Information Administration (EIA) reported an injection of 26 Bcf into storage for the week ending July 24. That was slightly above the averages of major polls but 7 Bcf lower than the five-year average.

“To our view, the fact that last week’s build” was only a little below the long-term average even as cooling demand was above normal during the covered week “highlights the supply/demand balance remains too loose,” NatGasWeather said.

But worries about potential demand weakness faded at the start of the first full week of August as the heat that traders anticipated during bidweek returned to forecasts and futures chalked up a double-digit surge.

Despite somewhat cooler temperatures to start August, the major weather models trended hotter and now show a return to above-normal temperatures starting next week, according to Bespoke Weather Services. “By early next week, heat rebuilds from the Plains over to the Midwest and into the Northeast,” the forecaster said.

EBW Analytics Group said Monday: Forecasts call “for significantly warmer weather than previously expected starting a week from today. While temperatures are not expected to be nearly as hot as in recent weeks, bulls are likely to be strongly encouraged by this shift.”

Looking ahead, the focus will remain on how long the bullish weather pattern can last and whether LNG can gather momentum ahead of the fall.

In the near term, Isaias on Monday was expected to regain hurricane strength and threaten the Carolinas and bring rain and cooler temperatures to swaths of the East Coast early this week, the National Hurricane Center said.

On the LNG front, Genscape reported encouraging advances. The firm said feed gas demand jumped higher over the weekend, with its estimate showing a 740 MMcf/d day/day increase on Saturday, “marking a significant uptick in demand as a result of decreased cargo cancellations.”

The shocks of the pandemic have dampened LNG demand, particularly from key locations in Asia and Europe as the virus continues to spread, limit economic activity and minimize commercial and industrial energy needs. This trend has kept gas prices in check this summer.

However, an LNG comeback combined with lofty summer temperatures in August, could offset any gradual increases in production of associated gas and continue a small run of storage builds to close out the summer. That could ease containment concerns and further support gas prices.

The latest EIA reported injection of 26 Bcf, while above expectations, marked the lowest level of the summer and the fifth consecutive week of sub-100 Bcf additions to underground stockpiles.

BofA Global Research analysts said in a note to clients that gas has reached a “turning point,” thanks to the above-average levels of heat this summer and indications that industrial demand is on a path back to normal. They also anticipate European and Asian LNG demand will revive.

“We expect injections to slow in the coming months to avoid end of season congestion — barring a very mild rest of summer — and thus do not see much further downside to front month prices from here,” the BofA analysts said. They expect inventories to reach 3.92 Tcf at the end of October, well below the 4.05 Tcf record set in 2016. “LNG demand will ramp up starting September and rise strongly into the winter as Europe and Asia free up storage capacity.”