Possibly on expectations of warmer weather, Transco Zone 6 NY’s August natural gas basis pricing has been on the rise, moving up 29 cents from minus $1.161 to minus $0.870 since the August contract became prompt. However, erasing the deficit to the Henry Hub completely is not likely to happen till late fall, according to NGI‘s analysis of forward prices. 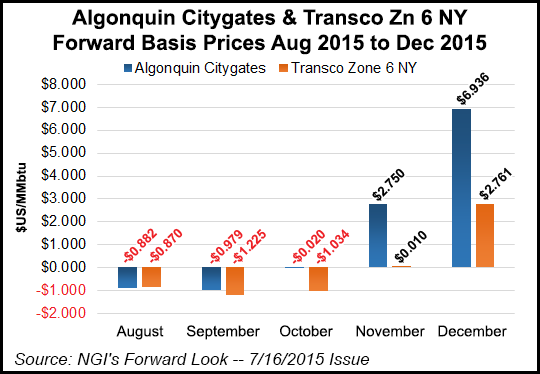 After a fairly mild summer to-date, much of the East is prepping for a significant heat wave that is expected to begin over the weekend. Temperatures in large eastern cities are expected to see readings in the high 90s to more than 100 degrees. Looking further out, ample gas supplies and robust storage levels are teaming up to keep a lid on natural gas prices into the winter.

As of July 15th trading, gas into New York City on Transco Zone 6 is expected to remain at sub-Hub levels until at least November where it is valued at a basis of just plus 1 cent, according to NGI’s Forward Look. While Texas Eastern M-3 may be close to Transco Zone 6 NY geographically, its forward price curve seems to reflect a more gradual transition to winter premiums moving from a basis of around minus $1.41 in October to minus $0.74 in November and then finally crossing in to positive territory in December with a basis of $0.301. Both of these locations should be experiencing much the same temperatures, but pricing at M-3 seems to be operating under the expectation of a later phase-in of winter heating demand coming in well past the assumed end of the injection season on Oct. 31.

Unlike Transco Zone 6 NY, Algonquin Citygates is expected to kick off the winter with a little more “oomph” as the forward basis curve shows it jumping from a basis of minus 2 cents in October 2015 to a whopping positive basis of $2.750 in November.

“It’s generally accepted that Algonquin Citygates will spike more than most northeastern points, but almost doubling from one month to the next would seem to imply some harsh weather expectations in November,” said NGI Markets Analyst Nathan Harrison.

The storage refill race continues to be strong; especially in the producing basin where stocks sit well above their five year average. “Racking up strong numbers during the injection season may explain why we’re seeing Algonquin Citygates winter basis capped under $10, unlike last year when on July 15, 2014, January forward basis there traded at a full $13.46 above the Henry Hub,” Harrison added.

Another strong injection of 99 Bcf for the week ending July 10 brings storage levels 73 Bcf above the five-year average and a full 653 Bcf above last year levels during the same week. Going into the report, estimates had ranged from 84 to 107 Bcf so the injection was squarely within expectations and will likely do little more than confirm to traders the pace of the current season.

August natural gas futures retreated 6.4 cents Thursday to $2.854. Futures traders saw the day’s decline consistent with the above-expectations 99 Bcf storage injection. “The market thought about it and said, ‘You know what? We’re still putting some good injections in here. Maybe we should come off,'” a New York floor trader said.

The market may be close to a new trading paradigm. Traders have long targeted $3 as what could be the beginning of a move higher, possibly substantially higher, and “if we settle a couple of days above $3, that might be enough to convince people that we might want to be trading above there,” a trader said.

Analysts suggest this might be just a speed bump to higher prices once warm weather hits. “The 99 Bcf in net injections for last week was somewhat more than expected, short-term bearish for prices,” said Tim Evans of Citi Futures Perspective. “This will test whether the market can withstand a minor disappointment and move higher, based on the warmer than normal temperature forecast.”

Meanwhile, market watchers are anticipating and debating what the likely repercussions will be once the Rockies Express Pipeline’s East-to-West Expansion project goes into full service on Aug. 1. The move is expected to flood the Midwest with Appalachian Basin gas.

Observ Commodities’ Wei Chien notes that Marcellus production is already seeping into the Midwest and displaced imports from the Gulf Coast. “This in turn drove the faster-than-normal injection pace in the producing region this summer,” Chien said in a recent report titled The True Impact of REX East-to-West Expansion on Nymex. “Instead of flowing to the Midwest, such portion of Gulf production goes straight into storage. As more Marcellus production reaches the Midwest via REX’s East-to-West Expansion project, more gas will be pushed back to the Gulf. Thus, the high injection rate in the producing region will continue for the rest of the summer; even with a warm summer, congestions will occur in the producing region. Such a dynamic is quite bearish for October Nymex contract.”