August natural gas bidweek prices moved up about a nickel nationally as traders enjoyed what might be the last month of “normal” business before September and October production is expected to pack industry storage facilities. 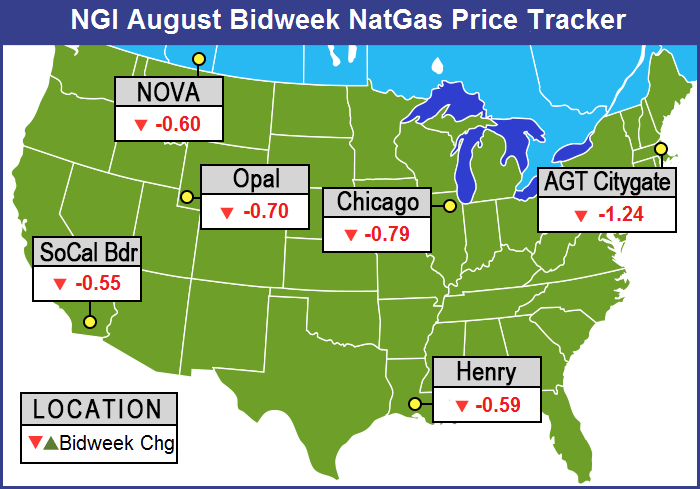 TheNGI National Bidweek Average gained 4 cents to $2.56 for August, and with the exception of the Northeast, most regions added around a dime. Bidweek’s greatest U.S. gainer proved to be Northwest Sumas, with an improvement of 22 cents to $2.43, and the point at the bottom of the scrum turned out to be Transco Zone 6 NY, with a decline of 19 cents to $1.93.

For the moment, the August 1 inauguration of east to west flows on the REX expansion hasn’t resulted in any major shifts in pricing, at least not for August Bidweek. Regionally the Northeast, including the Marcellus, was the worst performer, losing 3 cents to average $1.79, and South Texas and North Louisiana landed on top of the leader board with gains of 12 cents to average $2.82 apiece.

August futures expired Wednesday at $2.886, up 11.3 cents from the July expiration, while September futures finished trading Friday at $2.716, down 5.2 cents from Thursday and down 5.9 cents for the five-day trading week.

Bidweek observers didn’t see August as a month that might prompt traders to stray from their normal practices. “We are talking about a hot month still coming up, but the Northeast starts dropping off a little bit as weather moderates. You probably don’t have the 90 degree temps up there,” said an industry veteran.

He added that if storage got to the point where you can’t put any more in the ground, then the markets may change, but “August is just one more month of normal business, and September and October could get fairly interesting.”

In addressing the oncoming surge of gas expected to head west on the REX Zone 3 expansion (see Daily GPI, July 28), he didn’t see that necessarily having an impact on bidweek activities. He didn’t think September buyers, for example, would lessen bidweek purchases in anticipation of new west-bound gas conceivably crushing Midwest quotes. “Those producers sending gas west and to the Midwest hopefully have a home for that gas. Most of those guys baseload everything, and a big part of those long-term deals are done. These guys aren’t going to turn a bunch of gas loose without a market.

“They most likely hedged 80% of their gas for the next whatever number of months, and said ‘I’m going to sell it at first of the month pricing and the remaining 20% I’ll have on the market to sell at daily pricing.'”

Midwest buyers are watching physical prices with intense interest as gas begins to move west out of the Marcellus on expansions such as REX Zone 3. A Nebraska utility perusing its normal supply channels out of Northern Natural Ventura sees significant changes. Typically, Northern Natural Ventura will trade at a discount to the Chicago Citygate, but that may change. “We don’t trade out of Chicago, but we just watch it,” a Nebraska utility buyer told NGI.

“We just watch daily prices but are anticipating that we are going to start seeing some of that [Chicago Citygate losing some of its historical premium to Ventura] with the influx of westbound gas. We don’t have any transportation to move gas from Chicago, but as Chicago becomes well supplied, what is that going to do to those historical spreads as gas keeps getting trapped further and further west?

Analysts saw Friday’s screen move as “light volume book squaring ahead of the weekend in the wake of Thursday’s 3% drop,” according to Tim Evans of Citi Futures Perspective. “The temperature outlook seems little changed overall, with a bit more cooling demand for next week, but somewhat less in the week ending August 14. We continue to see the temperature forecast as consistent with near average storage injections over the next few weekly reports.”

Futures traders Thursday were left scratching their heads as the market made a counterintuitive move lower following a government inventory report showing a lesser increase in inventories than anticipated. At the close September had shed 9.6 cents to $2.768, and October was lower by 9.1 cents to $2.797.

Evans thought the number “should be seen as constructive if not mildly supportive. There were no reclassification issues this week, and so this is a relatively clean report in that respect. We think it tends to reinforce the idea that we’ve seen enough air-conditioning demand to keep the market in a relatively close balance on a seasonally adjusted basis. This isn’t necessarily supportive, although we think it may qualify as stronger than expected, less than satisfying for those holding short positions.”

In something of a structural market change gas buyers for PJM power generation have been busy this summer even though temperatures have not hit any records. According to industry consultant Genscape, however, the PJM burn-per-degree has reached levels not seen in years. “Nominated gas burn in PJM reached a summer-, year-, and two-year-to-date high [Tuesday] amid temperatures that have been warm but by no means record hot themselves,” the firm said in a report.

“Gas nominations to power plants reached 5,742 MMcf/d yesterday in the PJM market, a level not seen during the summer strip since July 2013. However, during that period temperatures were substantially warmer, revealing this summer’s actual burn-per-degree is much higher and burn levels will set new records when/if temperatures rise. In July 2013 burn peaked at 6,428 MMcf/d during a period when population-weighted net cooling degree days neared 22 CDDs. When yesterday’s demand peak heat only 15.5 CDDs were registered. This supports a trend that has been in force since late May wherein the region’s burn levels have increased above those at the same temperature in previous years.

“Total burn this summer (from May 1) has averaged 3,839 MMcf/d, its highest since 2012, though CDDs this summer have averaged just 5.8 versus the 8.2 average from summer 2012. Lower gas prices and coal retirements have increased gas use for power generation in the market to levels rivalling and exceeding summer 2012.”

Physical gas traded Friday for weekend and Monday was soft nearly across the country as the recent heat in a number of regions was expected to dissipate. The overall physical market on Friday fell 11 cents to $2.54, and losses were widespread, with nary a point making it to the positive side of the trading ledger. The Northeast led the charge lower, but many points posted losses of a dime or more.