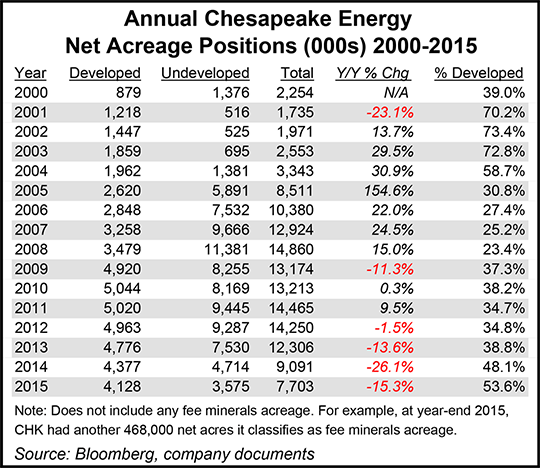 His sudden death in a one-vehicle crash came less than a day after he was indicted by the U.S. Department of Justice (DOJ) on a charge that he masterminded a plan to rig bids to purchase natural gas and oil leases in Western Oklahoma.

The single indictment, filed in the U.S. District Court for the Western District of Oklahoma, alleges that while he was CEO of the Oklahoma City-based independent between December 2007 and March 2012, McClendon orchestrated a conspiracy between two large oil and gas companies not to bid against each other to purchase the leases.

“The charge that has been filed against me…is wrong and unprecedented,” McClendon had said in response to the indictment. “I have been singled out as the only person in the oil and gas industry in over 110 years since the Sherman Act became law to have been accused of this crime in relation to joint bidding on leasehold.

“Anyone who knows me, my business record and the industry in which I have worked for 35 years, knows that I could not be guilty of violating any antitrust laws. All my life I have worked to create jobs in Oklahoma, grow its economy and to provide abundant and affordable energy to all Americans. I am proud of my track record in this industry, and I will fight to prove my innocence and to clear my name.”

McClendon’s lead lawyers Abbe Lowell of Chadbourne & Parke and Emmet Flood of Williams & Connolly said the DOJ “has taken business practices well-known in the Oklahoma and American energy industries that were intended to, and did in fact, enhance competition and lower energy costs and twisted these business practices to allege an antitrust violation that did not occur.

“In response to criticism of their past charging practices and in the name of a new policy to be tough on individuals, the prosecutors have wrongfully singled out Aubrey McClendon and have wrongly charged an innocent man. A charge is one thing. Proving the case is another.” Beginning now, “Aubrey gets his day in court where we will show that this prosecutorial overreach was completely unjustified.”

Over the more than five-year period, DOJ said the “conspirators would decide ahead of time who would win the leases. The winning bidder would then allocate an interest in the leases to the other company.”

McClendon, said the indictment, “instructed his subordinates to execute the conspiratorial agreement, which included, among other things, withdrawing bids for certain leases and agreeing on the allocation of interests in the leases between the conspiring companies.”

The indictment indicated that the other company involved in the scheme, identified as “Company B” is a large “corporation organized and existing under the laws of Delaware with its principal place of business in Oklahoma City, OK.” Reports tentatively identified the other company as SandRidge Energy Co., which at the time of the alleged scheme was run by Tom Ward, who co-founded Chesapeake with McClendon.

Several big exploration companies were headquartered in Oklahoma City at that time.

McClendon’s “co-conspirator” also was not specifically identified but the indictment said the person “was employed by Company B as its Chief Executive Officer and Chairman of the Board of Directors until at least March 2012.”

The indictment also indicates that “various corporations and individuals, not made defendants in this Indictment, participated as co-conspirators in the offense charged…and performed acts and made statements in furtherance thereof.”

While he served as CEO of Chesapeake, McClendon “formed and led a conspiracy to suppress prices paid to leaseholders in Northwest Oklahoma,” said DOJ Assistant Attorney General Bill Baer of the Antitrust Division.

“His actions put company profits ahead of the interests of leaseholders entitled to competitive bids for oil and gas rights on their land. Executives who abuse their positions as leaders of major corporations to organize criminal activity must be held accountable for their actions.”

FBI Special Agent in Charge Scott L. Cruse of the Oklahoma City Division said his office would “continue to work with the DOJ Antitrust Division to target those who devise schemes which create an unfair competitive advantage by way of bid rigging or other illegal means.”

If convicted of violating the Sherman Act, an individual may receive up to 10 years in prison and face a $1 million fine.

The McClendon case is the first to result from an ongoing federal antitrust investigation into price fixing, bid rigging and other anticompetitive conduct in the oil and natural gas industry, DOJ noted. The ongoing investigation is being conducted by the Antitrust Division’s Chicago Office and the FBI’s Oklahoma City Field Office, with assistance from the U.S. Attorney’s Office of the Western District of Oklahoma.

McClendon was forced out at Chesapeake in early 2013 and soon started up privately held AELP, which, like the company he co-founded with Ward, is headquartered in Oklahoma City (see Shale Daily, April 17, 2013). Coincidentally, Ward was ousted from SandRidge a few months later (see Shale Daily, June 20, 2013).

“Chesapeake has been actively cooperating for some time with a criminal antitrust investigation by the Department of Justice regarding past land leasing practices and has received conditional leniency under the Antitrust Division’s Leniency Program,” Chesapeake spokesman Gordon Pennoyer told NGI‘s Shale Daily. “Chesapeake does not expect to face criminal prosecution or fines relating to this matter. Chesapeake has taken significant steps to address legacy issues and enhance legal and regulatory compliance throughout the organization.”

The news that Chesapeake had cooperated in the investigation apparently bolstered the company, which has been teetering in the face of staggeringly low commodity prices. In early afternoon trading Wednesday, more than 36 million shares had traded hands and the stock had risen by more than 20%.

Meanwhile, frequent AELP financial backer, The Energy & Minerals Group (EMG), attempted to distance itself from McClendon. Managing Partner John Raymond said in a letter to investors, obtained by Reuters, that it would “cease any and all new business activities” with McClendon.

The Houston-based private equity firm has invested billions in McClendon-backed ventures, some when he ran Chesapeake and others for AELP. The fund was planning to launch some companies co-founded by AELP.

“It is purely a coincidence that these charges have been brought at the same time as these business arrangements were already being finalized,” Raymond wrote in the letter. The charges against McClendon “have nothing to do with EMG or any EMG portfolio company.

At the end of February, Raymond noted, McClendon no longer is CEO or a board member for any EMG portfolio company.

The Michigan Department of Natural Resources in 2012 began working with state Attorney General Bill Schuette regarding allegations that Chesapeake had colluded with Encana Corp. to avoid competing in the sale (see Shale Daily, June 26, 2012). Encana settled with authorities in May 2014 and agreed to pay $5 million in a civil settlement.

DOJ also launched an investigation regarding the possible anti-competitive behavior in Michigan, as well as other states.

Reuters in 2014 said it had obtained emails between Chesapeake officials, including McClendon, and Encana management. The emails, Reuters said, indicated that executives discussed how to avoid bidding against each other in the May 2010 auction.

Schuette also claimed in the 20-count indictment that Chesapeake had victimized Michigan landowners in the summer of 2010 by recruiting “multiple landowners across Northern Michigan to lease their land” (see Daily GPI, June 25, 2014; June 5, 2014). Allegedly, landowners often notified the agents of existing mortgages on the land to be leased, and the agents indicated the mortgages would not be an obstacle.

As part of the settlement that Chesapeake reached with Michigan authorities last year, the company pleaded no contest to misdemeanor charges of one count each for attempted antitrust violation and false pretenses. If Chesapeake were to abide with the settlement terms, the misdemeanor charges were to be dismissed after 11 months. All of the other criminal charges also would be dismissed by the state. Chesapeake did not admit to wrongdoing.

Last year Pennoyer told NGI‘s Shale Daily that Chesapeake was ready “to move past these legacy issues inherited from past management.”