Atlas Resource Partners LP (ARP) has picked up its third big leasehold this year in the Barnett Shale by agreeing to pay $255 million to DTE Energy Co. for an affiliate that owns close to 35 million boe of proved reserves in the Fort Worth Basin and in the Marble Falls, TX, area. 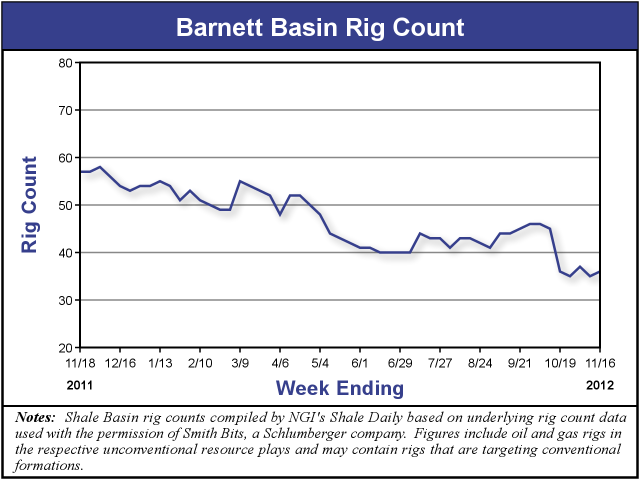 The purchase includes 261 gross producing wells on about 88,000 net acres, including about 75,000 net acres prospective for the oil and NGLs in Marble Falls, where there are about 700 identified vertical drilling locations. The acreage is 100% operated; DTE has a 99% net working interest and a 79% net royalty interest.

“This transaction is another in a series of accretive acquisitions at attractive prices,” said ARP CEO Edward E. Cohen. “We are not finished yet. We remain committed to significantly increasing distributions to our unitholders through these and future developments.”

After plummeting significantly over the last year due to the largely dry-gas makeup of the Barnett Shale, the number of active rigs drilling in the play has hovered around the mid-30s for the past couple of months, according to NGI‘s Shale Daily‘s Unconventional Rig Count. For the week ending Nov. 16, 36 rigs were drilling in the play, up one from the previous week but still 37% fewer than the 57 rigs operating one year ago.

The transaction is ARP’s fourth since it was created in March by Atlas Energy LP as an exploration and production (E&P) master limited partnership. ARP began building its cupboard with E&P opportunities by paying Carrizo Oil & Gas about $190 million for 277 Bcfe of proved reserves in the Barnett (see Shale Daily, March 19). Two months later the partnership added two more acquisitions to the Barnett portfolio (see Shale Daily, May 21). ARP also has locked up an oil-rich deal in the Mississippian Lime of Oklahoma with Equal Energy Ltd. (see Shale Daily, April 9).

COO Matthew A. Jones said the latest acquisition increases the partnership’s oil and NGL production to about 20% based on 3Q2012 production and increases ARP’s estimated pro forma net proved reserves to about 900 Bcfe. Initial drilling operations in the Marble Falls play are set to begin early next year. “In addition, we expect to gain significant efficiencies in this region as our established Fort Worth team will operate and develop these assets.”