While other stakeholders have been critical of California’s preliminary draft hydraulic fracturing (fracking) rules, two energy attorneys with the firm of K&L Gates consider the rules’ proposed protections for trade secrets to be adequate for shielding exploration and production (E&P) operators’ proprietary information tied to fracking. 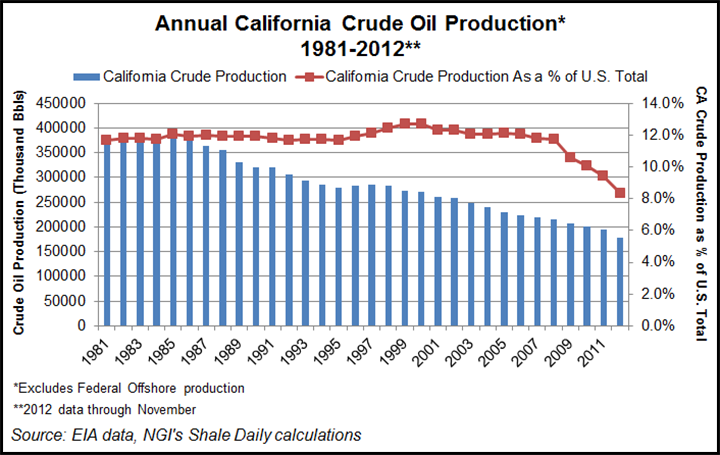 “Although California’s draft regulations would require disclosure of the general types of fracturing fluids used, they would preserve the ability of operators to maintain the precise formulas as trade secrets,” said Megan Cesare-Eastman and David Overstreet in a recent K&L oil/gas alert.

However, the attorneys also pointed out that Alaska in late December released draft fracking regulations that would require “full public disclosure” of each fluid additive type by chemical name, chemical abstract service registry number and concentration. Thus, if an E&P operator drilled in both states, the trade secret information would become public by virtue of the Alaskan requirements.

Noting that currently California has no specific fracking rules, although existing rules for oil/gas drilling have been applied by state officials for years, Cesare-Eastman and Overstreet said that if the draft rules, or something like them, are adopted, there will be testing, monitoring and reporting requirements imposed on E&P operators before and after fracking.

The California Department of Conservation’s Division of Oil, Gas and Geothermal Resources (DOGGR) was recently sued by the San Francisco-based Center for Biological Diversity in state Superior Court, seeking to have existing regulations applied to ongoing fracking in the state. DOGGR is currently circulating among stakeholders a “discussion draft” of proposed regulations covering fracking (see Shale Daily, Jan. 28, Dec. 21, 2012).

As a backdrop for their trade secret analysis, the two attorneys use a bullish overview of the Monterey Shale’s potential from a recent CNNMoney report. It is described as potentially 400 billion bbl, or 64% of the total oil shale reserves in the United States.

Noting that California’s Monterey Shale runs nearly from San Francisco to Los Angeles, a span of 400 miles north to south, the report cited IHS Cambridge Energy Research Associates for its assessment of what could be the source of the nation’s “next oil boom.”

California’s still preliminary draft fracking rules will provide what Cesare-Eastman and Overstreet called “a starting point for the industry, environmental community and lawmakers.”

“If the information is subject to a claim of trade secret, the operator is required to post the chemical family or similar descriptor for a chemical,” DOGGR said on its website. “Operators are not required to disclose information found in well records that have been identified as confidential under [state] Public Resources Code (section 3234).”

DOGGR continues to accumulate written comments about the draft proposed regulations (comments@conservation.ca.gov). In addition, once the formal rulemaking process begins, there will be a minimum 45-day public comment period that will include at least one public comment hearing.