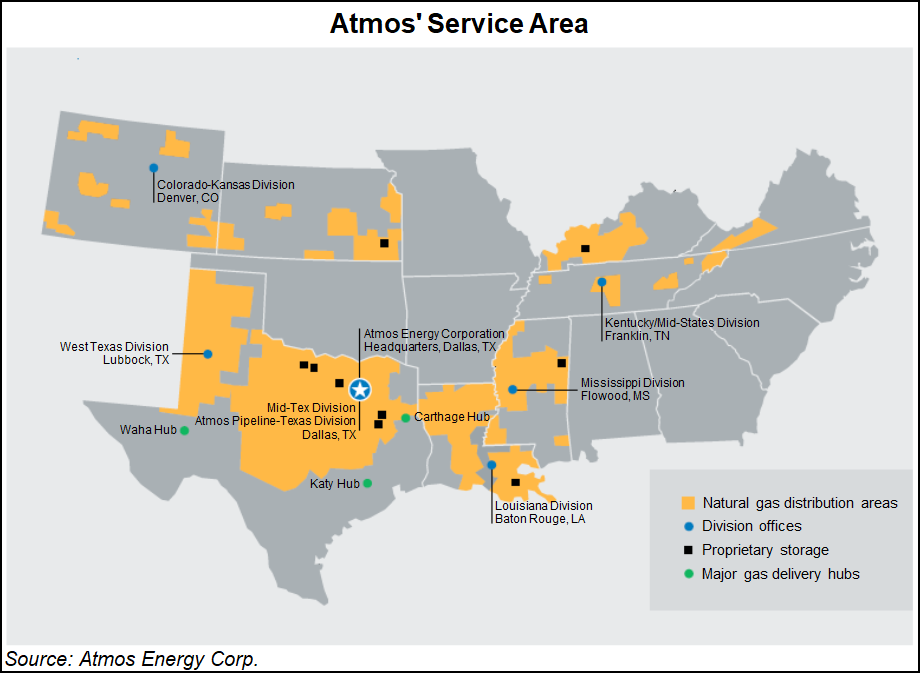 The 460 kW fuel cell produces electricity and heat via an electrochemical process that uses neither combustion nor moving parts, according to Atmos. The technology delivers up to 90% system efficiency and, when coupled with renewable natural gas (RNG) or carbon offsets, is emissions-free, it noted.

Atmos, which said in November it ships 8 Bcf/year of RNG, said it would work to power the fuel cell with RNG. Atmos serves 3.4 million natural gas customers in eight states.

During a conference call to discuss results for the second quarter of fiscal year 2022 (FY2022), CEO Kevin Akers said the company is “evaluating nearly 30 opportunities” to expand RNG transportation across its system. RNG investments, at least for now, would be downstream of the sales meter.

“We’re really receiving the process gas and transporting it on behalf of our customers,” he said. “And right now, those evaluations are truly what is near system, what is close to the system. So any capital investment at this time would be modest and it would be to maybe extend a short distance to a facility. But really, we’re not investing upstream at this point.”

The RNG investments fall within broader companywide plans to cut methane emissions to 50% of 2017 levels by 2035.

Akers also called the modernization program a centerpiece of the “comprehensive environmental strategy that focuses on reducing our Scope 1, 2 and 3 emissions and environmental impact from operations in the five key areas of operations: fleet, facilities, gas supply and customers.”

Atmos is upgrading infrastructure while expanding its customer base. CFO Chris Forsythe said customer growth during the first six months of FY2022 “was stronger than we had planned, and we expect that trend to continue into the second half…”

Akers said “the conversation that the general public is now seeing and wanting to feel around energy security” likely is a factor, noting geopolitical factors such as the war in Ukraine have thrust energy to the forefront.

“Natural gas in our industry has always been there behind the scenes…we’ve always kind of been out of sight, out of mind,” he said. Energy consumers “are wanting to know that natural gas is going to be there, it’s a viable choice…it’s abundant and they’re talking to us about national energy security and how they can have that in their community.”