After securing FERC’s blessing to place the remainder of its Atlantic Sunrise expansion into service, Transcontinental Gas Pipe Line Co. LLC (Transco) is set to ramp up takeaway capacity out of the eastern Marcellus Shale just in time for the heating season. 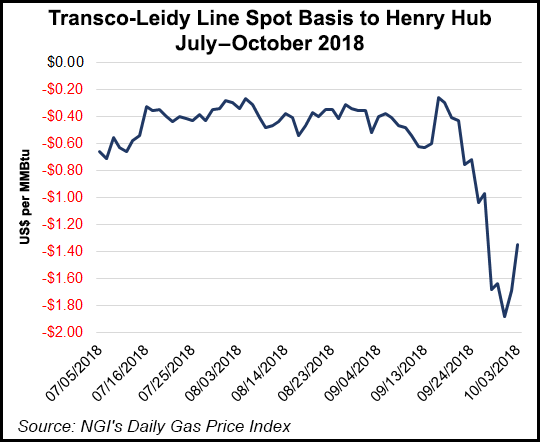 Federal Energy Regulatory Commission staff issued an in-service authorization Thursday for the 1.7 Bcf/d project, clearing the way for the critical 186-mile greenfield segment of Atlantic Sunrise to uncork additional Appalachian volumes by opening another avenue for producers to reach East Coast markets by way of the Transco mainline.

Transco parent Williams said it plans to place the project in full service on Saturday (Oct. 6).

FERC’s approval arrived after some delay, as the project’s remaining capacity was previously expected to hit the market in early September. Transco filed its initial in-service request on Aug. 24, stating it expected to the remaining facilities to be ready for full service by Sept. 10.

But inclement weather, including heavy rainfall and flooding, created challenges for Atlantic Sunrise construction crews and forced Transco to push back its timeline, with the operator ultimately completing the facilities by Sept. 19, FERC filings show.

The heavy rainfall appeared to raise concerns over erosion issues, as Transco repeatedly emphasized its efforts to restore steep slopes along the project route in a series of supplemental FERC filings in support of its original in-service request. In a Sept. 28 filing, Transco said it had deployed additional crews focused on restoration activities.

“Transco absolutely understand the importance of maintaining a focus on stabilizing and restoring sections of the right-of-way with steep slopes,” the operator wrote.

Transco previously added interim service associated with the completion of brownfield portions of Atlantic Sunrise, including an incremental 400,000 Dth/d that came online last August, and another 150,000 Dth/d approved to enter service in May.

Following Thursday’s order, Williams management marked the occasion as a major milestone for its flagship 10,000-mile pipeline system, which spans a large chunk of the Atlantic Seaboard, stretching 1,800 miles from South Texas to New York City.

“This project makes the largest-volume pipeline system in the country even larger, further executing on our strategy to connect premier natural gas supply areas with the best markets in the country,” Williams CEO Alan Armstrong said. “The project is significant for Pennsylvania and natural gas-consuming markets all along the East Coast, alleviating infrastructure bottlenecks and providing millions of consumers direct access to one of the most abundant, cost-effective natural gas supply sources in the country.”

Williams COO Michael Dunn took the opportunity to commend the company’s crews for “carefully executing this complex project in a safe and environmentally responsible manner.

“Their efforts have truly distinguished this project, positively collaborating with regulators, key stakeholders and communities to overcome challenges and install this critical infrastructure thoughtfully without experiencing any significant injuries or environmental issues,” Dunn said. “Even in the final months of construction, as some segments of the project area sustained more than 20 inches of rainfall, our teams acted quickly to restore the right-of-way and ensure environmental compliance requirements were met.”

The delays in start-up of the remaining Atlantic Sunrise capacity contributed to the recent bullish momentum in natural gas futures, according to EBW Analytics Group CEO Andy Weissman.

Prior to Thursday’s order, Weissman noted that the market appeared “increasingly concerned with low early October flow data” and the delays in starting up new capacity on Atlantic Sunrise and Nexus Gas Transmission, a separate project awaiting approval to begin flowing volumes east-to-west out of the Appalachian basin.

“Together, the questions about the supply side have helped bolster the case for increased winter risk premiums,” he said.

The start-up of the greenfield portions of Atlantic Sunrise will certainly be welcome news to producers like Cabot Oil & Gas Corp., which has contracted for 1 Bcf/d of the project’s 1.7 Bcf/d of capacity. In July, Cabot management said the company planned to place 37 wells online during the third quarter to help fill space on Atlantic Sunrise.

The new takeaway option could help improve Appalachian spot basis differentials that have weakened considerably over the past week and a half amid reports of softer shoulder season demand in the East.

On Oct. 1, Transco-Leidy Line traded $1.88 back of Henry Hub after enjoying just a 26 cent discount to the Hub as recently as the Sept. 17 trade date, Daily GPI historical data show.

“We are expecting Atlantic Sunrise to fill with a mix of gas routed from other pipelines (Tennessee Gas Pipeline, in particular) and new production,” Breshears said.