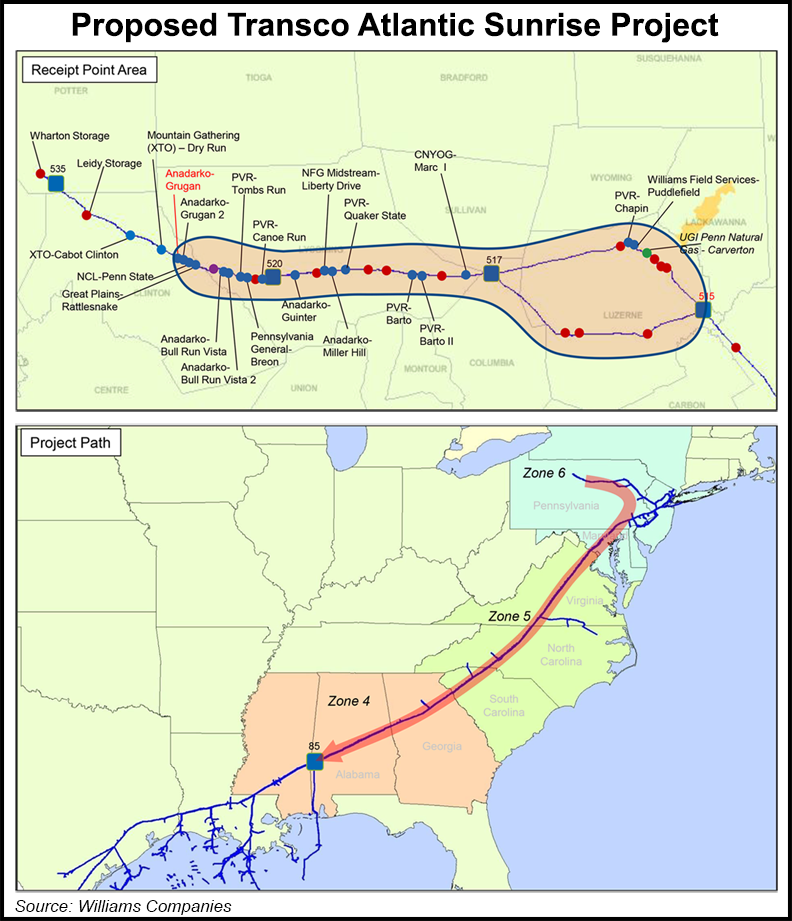 The three-judge panel ordered a temporary administrative stay of the project’s certificate on Monday, forcing Transco parent Williams Partners LP to suspend construction while the court considered an emergency motion filed by a coalition of environmental groups. The judges found Wednesday that the groups failed to meet the strict standards of a stay on construction during a broader appeal of the project’s certificate, but they did not elaborate further.

“Thousands of workers in Pennsylvania will be back on the job tomorrow,” Williams COO Michael Dunn said shortly after the court made its decision.

The court dissolved the stay after it partially granted a motion for clarification earlier on Wednesday that was filed by Transco. The judges had limited the stay only to construction in Pennsylvania and not other operations outside the state or partial service that was started on the project over the summer.

The back and forth stretch has demonstrated the fight that has unfolded in recent years as environmental groups have grown increasingly dissatisfied with the large number of infrastructure projects underway across the country, particularly in the Northeast, where they’ve leaned on state regulators and courts to slow down projects.

The groups, represented by the Sierra Club and the Appalachian Mountain Advocates, argue that construction should not continue until the Federal Energy Regulatory Commission conducts a “comprehensive environmental review.” After FERC issued the Atlantic Sunrise certificate, the groups filed for a rehearing, but without a quorum the Commission tolled the request until it could make a final decision. Citing FERC’s inability to act, the groups filed a petition for review in the DC Circuit in March challenging the certificate, which is still pending.

The 1.7 Bcf/d project would expand Transco to move natural gas from a constrained area in northeast Pennsylvania to Mid-Atlantic and Southeast markets. Brownfield construction on mainline replacements and equipment modifications started months ago, while greenfield construction started in September. Atlantic Sunrise is still expected to be placed into full service by mid-2018.

The Atlantic Bridge project, a 132,700 Dth/d expansion of the Algonquin and Maritimes & Northeast pipeline systems in New England backed by Enbridge Inc., faces a similar challenge with FERC having tolled a rehearing request and a petition for review pending before the DC Circuit.

Early last month, FERC filed motions in both cases requesting that the court allow it more time to file a certified index for the record, and asking that it be allowed to do so after commissioners have issued an order on the rehearing requests. With its quorum restored, and given that the rehearing requests have been pending since early this year, Clearview Energy Partners LLC said it expects an order on them “relatively soon.”