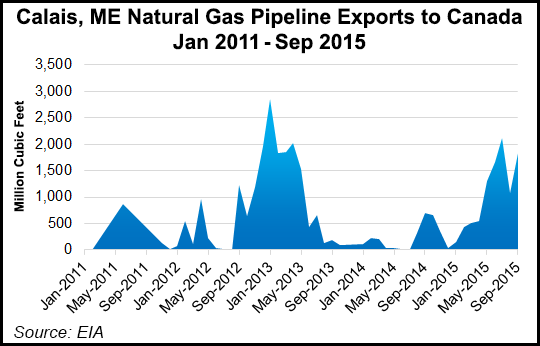 The NEB authorized AC LNG Inc. a license to import up to 2.3 Bcf/d from the United States and to export up to 2 Bcf/d from a proposed terminal in Nova Scotia (NS). AC is a Halifax subsidiary of Hiranandani Group of Mumbai, India.

The permit would allow the terminal to deal in a variable blend of U.S. and Canadian gas that would become available when Spectra Energy reverses the flow on Maritimes & Northeast Pipeline (M&NE) to northbound from southbound, AC told the NEB.

“Ultimately New Brunswick and Nova Scotia will import gas from the United States with the gas flowing over [M&NE] irrespective of the [LNG] project,” AC stated.

An open season of flow reversal delivery service has been held, but no date for the change has been announced.

AC earlier this year submitted an application to the NEB to import gas from the United States into Eastern Canada and then export it from a facility in Middle Melford, NS. The application sought to export up to 15.5 million metric tons (mmt) a year of LNG. At full build-out the facility as envisioned would include two marine jetties and LNG loading facilities.

“The feasibility, timing and commissioning of Phase I, Phase II and Phase Ill will be influenced by a variety of factors such as LNG market conditions,” AC stated in its initial application.

Canadian exports to New England via M&NE have dropped and at times been halted because of depleted source wells offshore NS since the pipeline was built 25 years ago.Traffic has already been occasionally reversed on M&NE during periods of peak Canadian gas demand.

“Full reversal of the [Maritimes] would easily support the [export terminal] project’s first LNG train and also meet the demand in Maine and Atlantic Canada without requiring construction of any new pipe,” AC officials said.

Similar evolution of North Atlantic gas traffic is forecast by the largest aspiring exporter in the region, Spain’s Repsol SA as majority owner of the Canaport LNG import terminal in New Brunswick LNG and most of M&NE’s delivery capacity.

No dates have been set for starting the forecast overhaul of the Atlantic Canadian gas trade, construction of AC’s proposed terminal, conversion of Canaport into an export outlet, or full reversal of M&NE. The LNG projects have also not yet identified gas sources or overseas customers.

Three other LNG export projects are being actively pursued in the province.

Goldboro LNG, sponsored by Pieridae Energy Canada, is designed to export 5-10 mmty, while Bear Head LNG, sponsored by LNGL Ltd., has proposed export capacity of up to 8 mmty; they were approved by NEB in August (see Daily GPI, Aug. 17). A fourth project, LNG Nova Scotia Inc., with export capacity of up to 250,000 metric tons/year, is targeting diesel replacement in Caribbean markets.