Atlantic Coast Pipeline LLC (ACP) is working through a slew of court cases in Virginia as opponents try to block its ability to survey on private land to route the proposed 550-mile, 1.5 Bcf/d interstate natural gas pipeline. 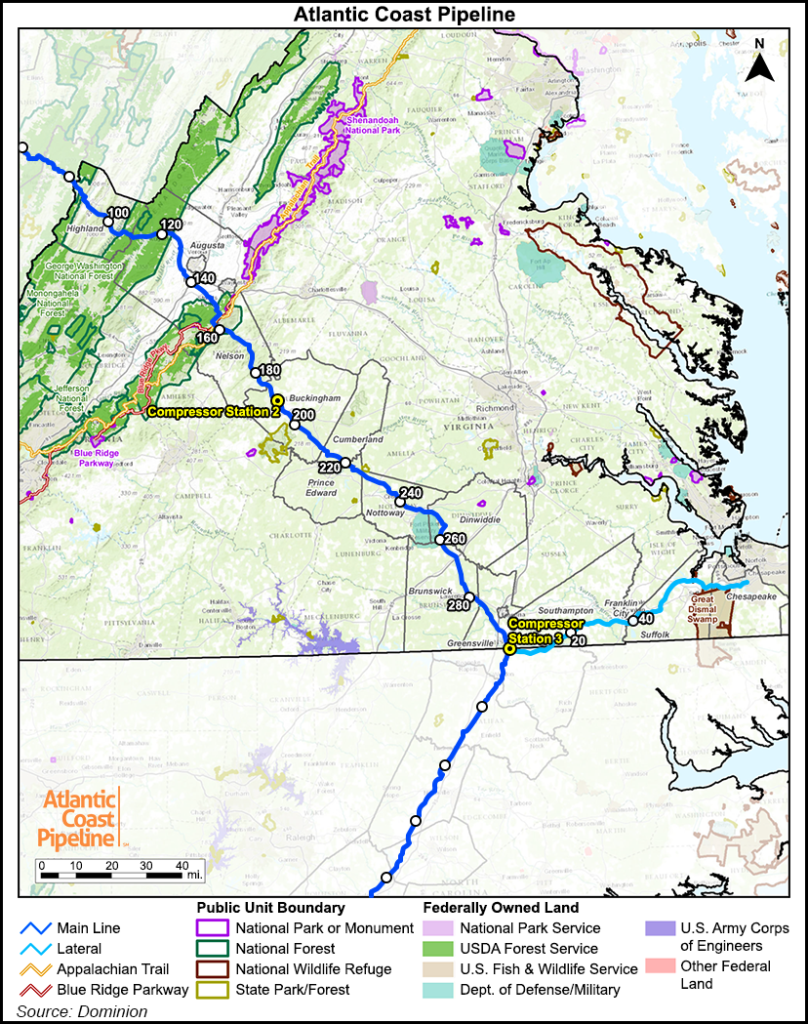 ACP won a legal victory in Augusta County Circuit Court this week when a judge granted motions for entry to perform surveys on two properties in the county, according to the company.

ACP spokesman Aaron Ruby told NGI that the pipeline, a joint venture of Dominion, Duke Energy, Piedmont Natural Gas and AGL Resources, is currently working through about 80 similar cases in Virginia across Nelson, Augusta, Highland, Buckingham, Prince Edward and Cumberland counties. Ruby said those 80 cases are out of about 1,400 landowners along the Virginia portion of ACP’s proposed route.

In cases where the property owners have refused to grant permission to survey for the pipeline, which would begin in Harrison County, WV, before crossing into Virginia and North Carolina, ACP invoked a controversial 2004 Virginia law — state code 56-49.01 — that allows natural gas companies rights of entry to survey on private property without owners’ permission, assuming notice has been given and certain conditions are met.

“It is always our preference to perform surveys with the permission of the landowner, and the vast majority of landowners on the proposed route have given us permission,” Ruby said. “In the relatively small number of cases where we have not received landowner permission, we have asked the courts to affirm Virginia’s statute allowing natural gas companies to perform these surveys.”

Ruby noted the importance of surveying for designing “a route that is safe, constructible and has the least impact on landowners and the environment” and for complying with FERC’s environmental review process.

ACP and similar interstate pipelines designed to carry Marcellus and Utica shale-produced gas have had to navigate through a period of what sitting members of the Federal Energy Regulatory Commission have described as “heightened infrastructure opposition” (see Daily GPI, Dec. 1, 2015). Others in the industry have said that FERC’s interstate pipeline review process has become a battleground for opponents of unconventional shale development and fossil fuel extraction generally (see Daily GPI, Nov. 2, 2015).

Both ACP and the Mountain Valley Pipeline (MVP) have proposed routes that would cross through Virginia, and both are on similar regulatory timetables with FERC (see Daily GPI, Oct. 23, 2015). The lawmakers backing the effort to repeal Virginia’s gas survey law represent areas along the routes of either MVP or ACP.

“The state and federal courts have consistently ruled that Virginia’s survey statute is constitutional and that we have followed the requirements of the law. We expect the courts will continue to uphold the constitutionality of the law and affirm that we have met its requirements,” he said. “As we move forward with completing these surveys, we remain committed to following the law and treating all landowners with fairness and respect.”

The U.S. Forest Service recently dealt a setback to ACP when it denied the pipeline’s special use permit to cross the Monongahela and George Washington national forests along the West Virginia/Virginia border (see Daily GPI, Jan. 22). The ACP applied for certification with FERC in September and is targeting an in-service date of late 2018 (see Daily GPI, Sept. 18, 2015).