Officials with Atlantic Coast Pipeline LLC (ACP) said Friday that they have developed an alternative route through the Monongahela and George Washington national forests in Virginia and West Virginia after their previous route was rejected by the U.S. Forest Service (USFS). 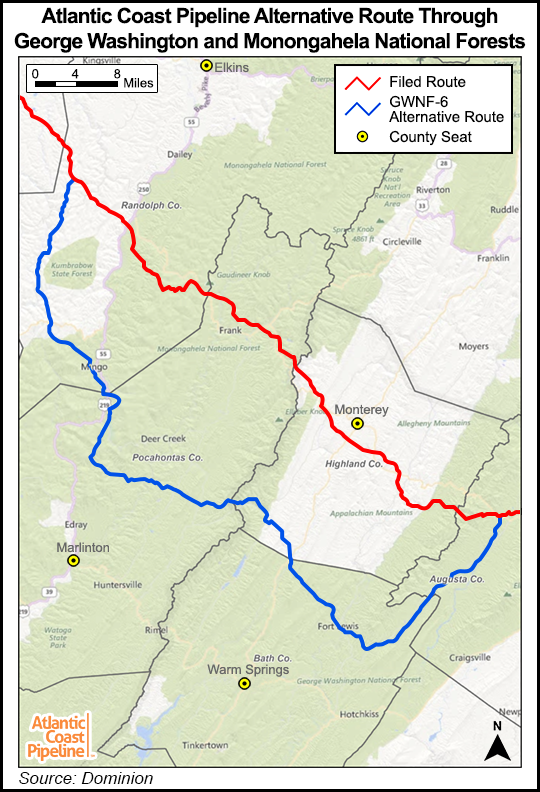 The 1.5 Bcf/d, 550-mile ACP would start in Harrison County, WV, and carry Marcellus and Utica shale gas into Virginia and North Carolina, traveling through the national forests along the Virginia/West Virginia border.

The decision from USFS did not come as a complete surprise, as the agency had previously communicated their concerns about ACP’s proposed route (see Daily GPI, Aug. 5, 2015; Dec. 16, 2015).

On Friday, ACP said it “has worked with the U.S. Forest Service over the last several months to find an alternative route that avoids sensitive areas” in the two national forests. “As a result of these extensive consultations, next week Atlantic will formally adopt an alternative route that we believe will meet the Forest Service’s requirements and provide a viable path forward for the project. Finding a viable route through the national forests is an important milestone for the project and would allow the Federal Energy Regulatory Commission to continue its environmental review.”

The alternative route will avoid Cheat Mountain and Shenandoah Mountain to limit impact on certain species living in those areas, ACP said, bringing total mileage through the national forests down from 28.8 miles to 18.5.

“Ultimately, the Forest Service has the permitting authority for crossing the national forests,” Ruby said. ACP has been communicating with USFS in an effort to understand “exactly what their requirements are so that we can develop a route that meets those requirements.”

Roughly 249 new landowners in Randolph and Pocahontas counties, WV, and Highland, Bath and Augusta counties, VA, will be impacted by the alternative route. Affected landowners are being contacted to request permission to survey.

ACP has been working through a number of court cases in Virginia to secure authority to survey for the pipeline’s route in instances where landowners have refused access. Amid opposition to the ACP and the Mountain Valley Pipeline, which would also cross through Virginia, a 2004 Virginia state law that allows natural gas companies to survey on private property without the owner’s permission has come under scrutiny (see Daily GPI, Feb. 4).

ACP will submit a preliminary analysis of the alternative route to FERC next week and conduct a series of public informational meetings along the route in March.

The current timetable for the ACP, which filed with FERC in September (see Daily GPI, Sept. 18, 2015), is not expected to change as a result of the USFS rejection of its previous route. The pipeline is targeting an in-service date in 4Q2018.