FERC staff will consider at least three possible alternatives for two proposed natural gas pipelines that would serve the Appalachian Basin, including having them share the same right-of-way, but the companies backing both projects say such alternatives are not viable. 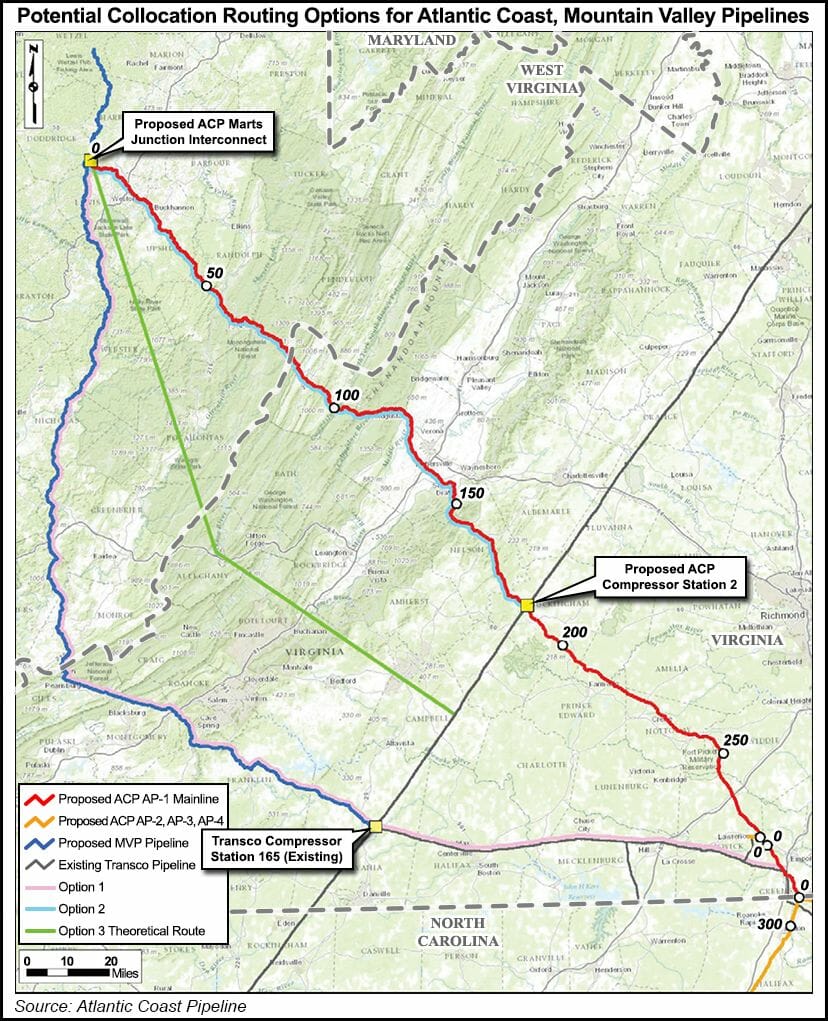 According to documents filed with the Federal Energy Regulatory Commission, the agency’s Office of Energy Projects said on July 14 that its staff would consider alternatives affecting the proposed Atlantic Coast Pipeline (ACP) and the Mountain Valley Pipeline (MVP).

Specifically, three alternatives outlined in draft Resource Report No. 10 — which Atlantic Coast Pipeline LLC, the joint venture (JV) that wants to build and operate the ACP, submitted as part of its pre-filing process — calls for:

“In compliance with the requirements of the National Environmental Policy Act, FERC staff identifies and analyzes the potential environmental impact of alternatives to a proposed pipeline route, including collocation alternatives and a ‘No-Action Alternative,’ FERC spokeswoman Tamara Young-Allen told NGI’s Shale Daily on Thursday.

Allen added that it was unusual for FERC to suggest that two companies agree to form a collocated pipeline. One such instance occurred in 1998, when the Maritimes & Northeast Pipeline and the Portland Natural Gas Transmission System (PNGTS) agreed to share a 101-mile section [CP96-178] of natural gas pipeline from Westbrook, ME, to Dracut, MA (see Daily GPI, March 4, 1998).

Atlantic Coast Pipeline LLC — a JV of Dominion (45% stake), Duke Energy (40%), Piedmont Natural Gas (10%) and AGL Resources (5%) — would build and own the pipeline, with Dominion serving as operator. Subsidiaries and affiliates of all the partners, as well as PSNC Energy, would be 20-year contract customers, pending regulatory approvals.

The MVP would be owned by Mountain Valley Pipeline LLC, a JV with EQT Midstream Partners LP (55% stake) serving as operator. The other stakeholders are NextEra US Gas Assets LLC (35%), WGL Midstream (7%) and Vega Midstream MVP LLC (3%).

The companies backing both projects said they deserved to be built separately.

“We understand and respect FERC’s jurisdiction to consider the concept of co-locating pipeline projects when FERC explores the environmental impacts of projects,” Natalie Cox, spokeswoman for EQT Corp., told NGI’s Shale Daily. “Some stakeholders have asked MVP to evaluate co-locating along a common right-of-way with ACP; however, after careful evaluation, this alternative is not feasible and, more importantly, would provide no environmental benefit.”

Cox said the two projects are designed to serve different markets, with MVP serving the Mid- and South Atlantic states directly from the Transco system, while the ACP would serve customers in southeastern Virginia and southern North Carolina. Additional miles of pipeline would need to be built under collocation.

“Thus, from our perspective, the entire concept of minimizing environmental impact by co-locating pipeline is not a viable option when considering purposes and needs for the MVP and ACP,” Cox said. “We expect to more fully address these issues during the FERC process.”

In its pre-filing, Atlantic Coast Pipeline LLC also pointed to the two projects serving different end-use markets, but it also added that the first option would increase the length of the ACP mainline by 68 miles and increase the area of impact by at least 1,029 acres. The additional cost would also make the ACP not viable.

“Another flaw with the Option 1 scenario is that the mountainous terrain along portions of the MVP route, particularly in northern West Virginia, would not allow for construction of two large diameter pipelines in a common corridor,” Atlantic Coast Pipeline LLC said.

Similarly, the company said the second option would increase the impact to the Monongahela and George Washington national forests, requiring the crossing of steep mountains and ridges, while the third option was also untenable because it and Dominion “were unable to locate any routes that both avoid these features and cross terrain suitable for construction of two large diameter pipelines in a common corridor.”

“In summary, none of the alternates met the demand of our customers for delivery of natural gas at defined locations,” Dominion spokesman Jim Norvelle told NGI’s Shale Daily.

Despite the companies’ objections, some elected officials were pushing FERC to give collocation some consideration.

In a letter to FERC on Tuesday on the MVP, U.S. Sen. Tim Kaine (D-VA) said that while he takes “no position on the underlying question of whether this project should be approved,” his constituents had raised concerns over the project’s cumulative and environmental impacts, community benefits, and the perception that the project “is being fast-tracked without appropriate time for input by affected stakeholders.”

“I believe FERC should analyze whether the MVP and the Appalachian Connector are both necessary if they are traveling along a nearly identical route — or alternatively, whether other projects are necessary if these two are being located in close proximity to minimize the need for new right-of-way.

“Given gas production trends in the Marcellus Shale and the benefits this has incurred in terms of energy prices and lower air pollution, new pipeline capacity may be necessary. The question is how much.”