Two Appalachia-to-Southeast takeaway projects continue to encounter obstacles as they plot routes through rural stretches along the border between West Virginia and Virginia. 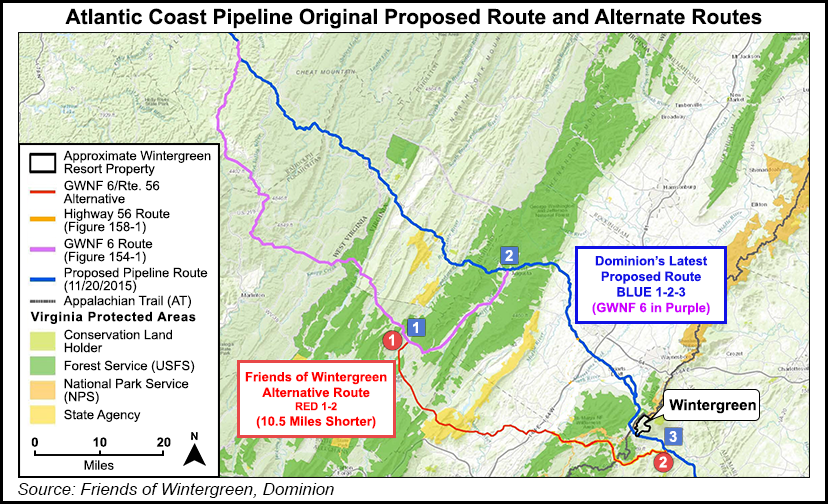 Late last week, Friends of Wintergreen (FOW), a nonprofit advocating for the interests of the Wintergreen Resort ski area in Nelson County, VA, filed an alternative route for ACP with the Federal Energy Regulatory Commission. The group said ACP’s current route cuts too close to Wintergreen’s entrance and would have “adverse environmental and economic impacts” on the resort and the surrounding area.

Also late last week, the U.S. Forest Service (USFS) wrote in a letter to FERC that MVP’s current plan to cross the Appalachian National Scenic Trail is “inadequate because it does not meet the scenic integrity objectives” of the government’s land and resource management plan for the area.

Friends of Wintergreen Pushing Back Against ACP

The route submitted last week by FOW was the fourth detailed alternative route proposed by the group, and like the previous three it generally aims to mitigate impacts on the Wintergreen Resort. FOW, represented in its FERC filing by international law firm Greenberg Traurig LLP, enlisted environmental and technical consultants to develop the alternative routes.

The group alleged in its most recent filing that ACP backer Dominion did not adequately consider its three previous alternative routes, which were referenced in supplemental data requests from FERC. FOW argued that its alternative routes are “both technically feasible and less environmentally and economically damaging than ACP’s Proposed Route.”

“Despite the very serious economic, safety and environmental impacts of the Proposed Route in the Wintergreen area that have been detailed for over six months, the Dominion Response to [FERC’s data requests] refused to identify any alternate route, including minor route variations, that would eliminate or even reduce the damage to the Wintergreen area,” FOW wrote. “Instead, Dominion’s response to the Data Requests has been to identify alternate routes that are unworkable from both a legal and engineering perspective and then to reject them.”

FOW said ACP’s route change to accommodate the USFS “inexplicably and sharply turns northeast” to reconnect with the original proposed route. The group said the route change “creates an excellent opportunity to avoid all the damage identified by FOW” and proposed an alternative route branching to the southeast that would bypass the Wintergreen Resort area.

FOW argued that FERC should “expressly direct Dominion to fully evaluate each of the four specific route alternatives or deviations” described in its filing and “either adopt one of these alternatives or explain in detail why they should not be adopted.”

Asked about the alternative routes submitted by FOW, Dominion spokesman Aaron Ruby told NGI that the company has “given those alternatives the careful consideration they deserve. However, our analysis found a number of significant construction challenges and federal land management restrictions that would prevent us from using those alternatives.”

“We’ve looked at more than 6,000 miles of potential routes in order to choose what we believe is the best 600-mile route that has the least possible impact on landowners and the environment,” he added. “We’ve studied the route for close to two years; we’ve surveyed more than 500 miles on the ground; and we’ve worked with hundreds of individual landowners to address their input; not to mention the extensive consultations we’ve had with more than a dozen state and federal agencies.”

In its filing with FERC last week, USFS said MVP “should develop and evaluate additional construction alternatives and/or mitigation measures…in order to gain consistency with the scenic integrity objectives” for the Appalachian National Scenic Trail.

The USFS recommendation came after a site visit last month at MVP’s planned crossing of the trail that was attended by representatives from USFS and MVP, as well as other stakeholders.

MVP spokeswoman Natalie Cox told NGI Tuesday that the project’s environmental team has been working closely with USFS throughout the siting process. MVP “will evaluate potential alterations that are able to meet MVP’s technical and constructability requirements, as well as those of the USFS. We are confident that any route modifications will lie within the existing study corridor for which MVP survey activities have been completed; therefore, we do not anticipate any additional delay to our proposed schedule.”

The latest obstacles for MVP and ACP come as the Pennsylvania-to-New York Constitution Pipeline, another Appalachian Basin takeaway project, has been stalled over a permit denial in New York state (see Daily GPI, April 25). The legal battle over the pipeline’s future began to heat up this week, with New York’s attorney general calling on FERC to investigate Constitution for allegedly cutting trees and taking other unauthorized actions for the project (see Shale Daily, May 16).

ACP and MVP both submitted applications with FERC last fall and have similar aspirations of connecting producing areas in the Appalachian Basin to markets in the Southeast and Mid-Atlantic (see Daily GPI, Oct. 23, 2015; Sept. 18, 2015). Both are targeting in-service dates in late 2018.