FERC has agreed with the decision of an administrative law judge (ALJ) and rejected a motion filed by Liberty Utilities (Pipeline and Transmission) Corp. and Algonquin Tinker Generation Co. that would have stalled a proposed rate increase by Maritimes & Northeast Pipeline LLC’s (M&NE). 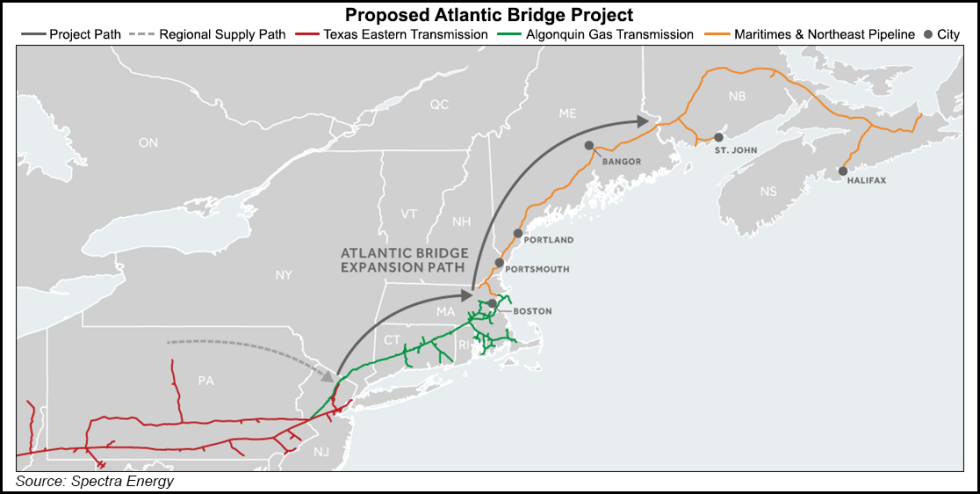 In an order issued Wednesday, the Federal Energy Regulatory Commission approved a settlement certified by the ALJ last month, granted an interlocutory appeal from M&NE and Commission Trial Staff, and rejected the Liberty affiliates’ motion for late intervention.

The Commission directed M&NE to file actual tariff records to replace the pro forma records filed as part of the settlement [RP15-1026]. The ALJ found that the settlement was uncontested, regardless of the status of the Liberty affiliates’ motion for late intervention.

“Liberty Affiliates have not shown why they could not have intervened earlier in this proceeding, well before the parties reached a settlement in principle in December of last year,” according to the FERC order. “Liberty Affiliates emphasize that their interest in this proceeding is as investors in Tennessee’s Northeast Energy Direct Project, which they state is in competition with Algonquin and the Algonquin-Maritimes Atlantic Bridge Project. However, they have provided no reason why they could not have been aware of any potential impact of this rate case on their interests in June 2015, when timely interventions were due.”

The Liberty affiliates had argued in comments filed at FERC last month that M&NE “may be deliberately confusing both market participants and federal and state regulators,” disguising the true availability of mainline capacity on Maritimes “in the interest of preserving future preferred access to Maritimes’ FPPBH [firm primary path backhaul] service to favor Maritimes’ affiliated pipeline, Algonquin Gas Transmission, particularly through service on filed or announced expansion facilities.”

The M&NE system receives natural gas at the Maine-Canada border and transports it to delivery points at interconnections with its affiliate Algonquin Gas Transmission and Tennessee Gas Pipeline in Massachusetts.

Last April, FERC published a Notice of Intent to prepare an environmental assessment and a request for comments on the Atlantic Bridge project proposed by M&NE and Algonquin, which would include modifications to both systems. It would permit M&NE to receive gas at the southern end of its system and transport it north into Maine.

On Dec. 10, M&NE announced that active parties in the rate case had reached a settlement in principle that addressed all issues.

The settlement would reduce rates for all services to a level below those effective prior to M&NE’s filing, maintain those rates until at least Nov. 1, 2019, and reduce certain rates again when Atlantic Bridge enters service.

M&NE has also been entangled in a dispute with Repsol Energy North America Corp. over the pipeline company’s proposal to revise its tariffs, although it isn’t certain that those changes would apply to Atlantic Bridge (see Daily GPI, Jan. 28). In December, Repsol said M&NE and Algonquin had failed to answer questions over how Atlantic Bridge could impact M&NE’s existing shippers (see Daily GPI, Dec. 31, 2015).

*Clarification: The headline and first paragraph of the original article have been edited to clarify that while the issues raised by Liberty Affiliates were related to Atlantic Bridge, the case was separate from the Atlantic Bridge Certificate Proceeding, which is currently pending at the Federal Energy Regulatory Commission.