Athabasca Oil Corp. said it has formed a joint venture (JV) valued at C$475 million (US$338 million) with a subsidiary of Murphy Oil Corp. to develop light oil targets in the Duvernay and Montney shales, in the Kaybob and Placid areas of Alberta. 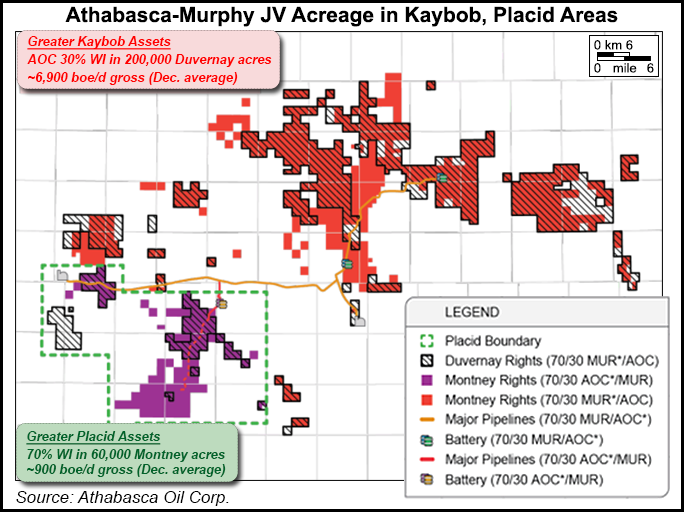 In a statement Wednesday, Calgary-based Athabasca said it would sell a 70% working interest (WI) in production, acreage and infrastructure within the Greater Kaybob area to Murphy Oil Co. Ltd., which would assume operatorship under a joint development agreement (JDA). The assets include approximately 200,000 acres prospective to the Duvernay Shale, with access to condensate-rich and volatile oil windows.

Athabasca will also sell a 30% WI in production, acreage and infrastructure within the Greater Placid area, but will retain operatorship under the JDA. The Placid assets include approximately 60,000 acres prospective to the Montney Shale. Athabasca said it is establishing a core area at Placid, where it has high graded 25,000 acres prospective to the Montney across two separate intervals.

Under the agreement, Murphy will pay approximately C$250 million (US$178 million) in cash to Athabasca at closing. An additional consideration of C$225 million (US$160 million) will take the form of a capital carry in the Duvernay, where Murphy will pay for 75% of Athabasca’s share of development capital, up to a maximum five-year period. Gross capital investment from the JV over the five-year period is expected to total approximately C$1 billion (US$712 million) in the Duvernay, with flexibility on spending as commodity prices recover.

The deal, which is subject to customary closing conditions and regulatory approval, has an effective date of Jan. 1 and is expected to close late in the first quarter.

“The transaction materially progresses Athabasca’s strategic goal of transitioning the Duvernay play to commercial development over the mid-term,” Athabasca CEO Rob Broen said, adding that the company “has now positioned itself with a capital risk profile appropriate to its size while retaining tremendous upside in the Duvernay shale play.”

At closing, Athabasca anticipates having approximately C$900 million (US$641 million) of liquidity, with a net cash position of approximately C$80 million (US$57 million) adjusted for debt. The company said its balance sheet would be further bolstered by the aforementioned capital carry in the Duvernay over the midterm.

Athabasca said its production for December averaged approximately 15,200 boe/d, of which about 7,800 boe/d was light oil and the remaining 7,400 b/d was thermal oil. The production figure exceeded the company’s revised exit guidance of 12,000-15,000 boe/d. Athabasca said it would update its budget and guidance for 2016 after the agreement with Murphy closes.