Consumption in the industrial sector is expected to drive a 3.2% year/year (y/y) increase in global natural gas demand during 2021, according to a second quarter Gas Market Report published by the International Energy Agency (IEA). 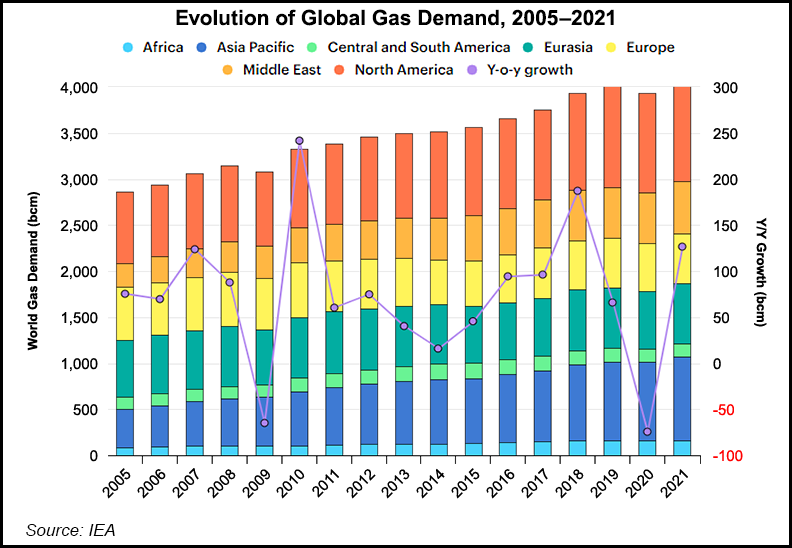 This compares with a 2.8% increase forecast in the 1Q2021 report, IEA’s inaugural offering in the series.

The projected recovery would offset losses seen in 2020 and result in some net growth above 2019 levels, researchers said. “However, as mentioned in our previous quarterly report, this is likely to be a fragile and rather asymmetric recovery, as sectors and regions that have suffered the largest losses may not see the biggest gains.

“Moreover, the prospect of a prolonged impact of the pandemic on the global economy adds further uncertainty to the pace of short-term gas demand growth.”

This year, IEA expects industrial demand to grow by 5.4%, close to 55 Bcm (1.94 Tcf), driven largely by China, India and emerging Asian markets. “Higher gas demand from industrial buyers hinges on a consumption rebound in both these large Asian economies and their main export markets,” researchers said.

Gas demand from the power sector, meanwhile, has a less bullish outlook this year. IEA is forecasting a 1.2% increase in gas demand for power burn in 2021, not sufficient to offset the estimated 2.1% annual decline seen in 2020.

The global energy watchdog noted in the report that power generation was the most impacted demand segment in pandemic-ravaged 2020. It accounted for an estimated 45% of the total annual decline, which IEA estimated at about 100 Bcm (3.5 Tcf), despite favorable fuel-switching trends in North America and Europe.

This year “is expected to see limited growth in electricity demand, strong competition from increasing renewable capacity and lower cost-competitiveness against coal as natural gas prices recover from their 2020 lows,” researchers said.

For the residential and commercial sectors, meanwhile, IEA is projecting a 4.9% increase in gas demand for 2021 after a 2.4% annual decline in 2020. Last year’s decline “reflected the joint impacts of unusually mild winter temperatures for residential and widespread lockdowns for commercial,” researchers said.

“The return to more average winter temperatures and retail activity, together with the expansion of gas connections in China,” support the more bullish outlook for residential and commercial gas demand this year.

Researchers noted that while demand is expected to recover globally, “regional disparities remain, with the most mature markets in Europe, Eurasia, North America and Asia seeing slower growth — with only partial recovery in some.

“Meanwhile, faster growing economies in Asia, the Middle East and Africa are projected to go beyond simply bridging the 2020 gap in 2021.”

Total gas consumption in Asia is expected to grow by 5% in 2021, IEA said, “thanks to a strong rebound in economic activity and expanding gas infrastructure across the region.”

China accounts for 56% of the expected growth, followed by India at 14%. After strong growth in the first quarter, IEA said European gas demand is expected to rise 3% y/y in 2020, recovering to pre-crisis levels.

“The sharp increase in [European] carbon prices is expected to support additional gas burn in the power sector through the summer,” researchers said, “while industrial gas demand is expected to continue its recovery amid improving economic conditions.”

Despite a winter storm-related surge in U.S. gas demand in mid-February, U.S. consumption declined by an estimated 3.8% y/y during the past heating season lasting from October through the end of March.

Industrial consumption remained stable and comparable by volume versus the previous winter, the IEA team said. “Wide temperature variations remained the main driver of gas demand over the heating season.”

Severe cold spells in January and February caused demand to surge, though this “did not lead to price spikes, as supply remained stable, supported by a combination of larger storage withdrawals, a ramp-up in pipeline supplies and greater liquefied natural gas (LNG) sendout,” researchers said.

The gas report follows IEA’s latest Monthly Oil Market Report, in which the energy watchdog raised its forecast for 2021 global oil consumption growth by 230,000 b/d to 5.7 million b/d versus 2020.