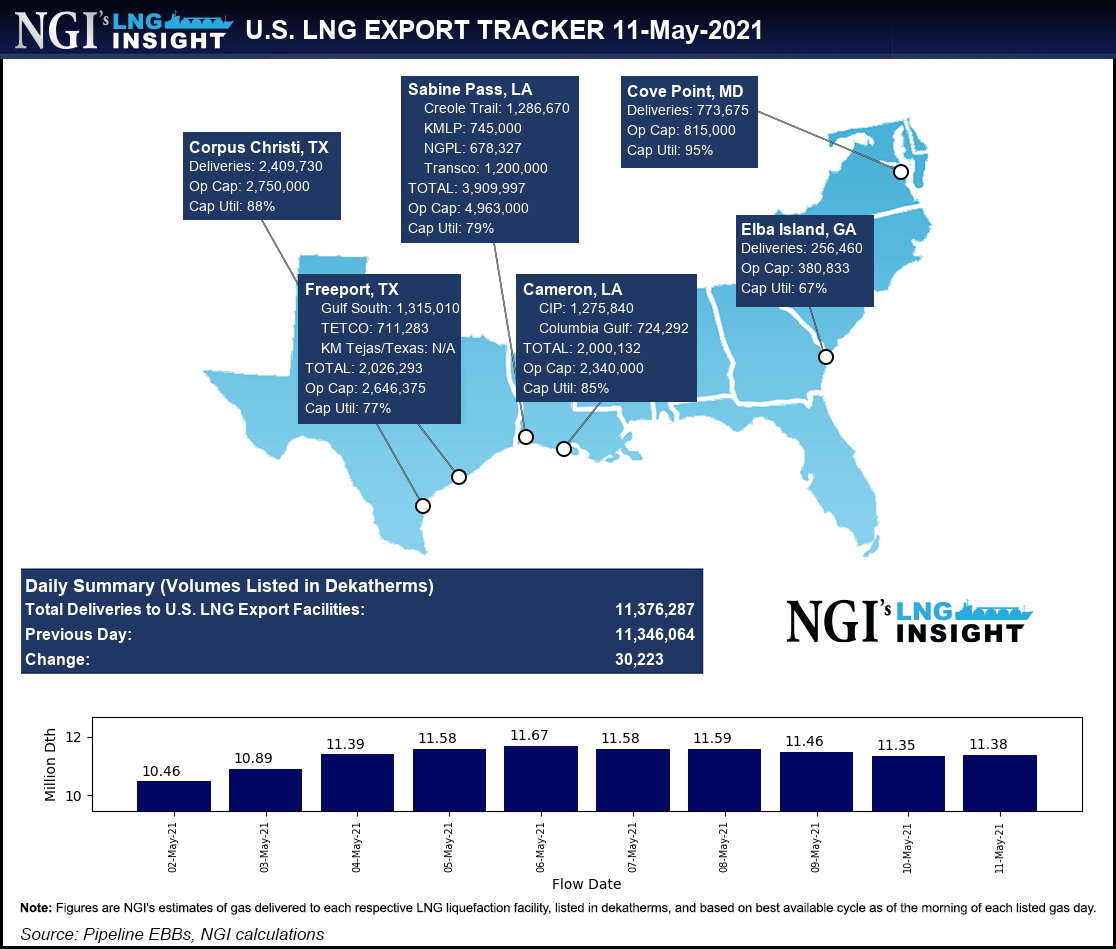 Tuesday’s gains came after the prompt Title Transfer Facility benchmark finished Monday at $8.973/MMBtu and the prompt National Balancing Point broke through the $9.00 barrier to hit $9.05 after a stretch of continued strength last week. Prices were moving higher along the forward curve too.

Weaker pipeline imports from Russia and Norway, along with stubborn cold across Europe and record high carbon prices, were further incentivizing natural gas for power generation and pushing up prices.

Asian buyers that are heavily dependent on the spot LNG market ahead of the summer months were sucking cargoes out of Europe as well. While Japan Korea Marker futures prices have also moved higher, spot prices in North Asia jumped above $10.00/MMBtu on Tuesday as economic growth and gas demand in the region, particularly in China, have continued to lift prices this year.

Nine LNG cargoes were scheduled to arrive at receiving terminals in the UK, Netherlands and Belgium through the end of May, according to Schneider Electric. That is down from 10-15 arrivals in recent weeks.

While European storage inventories remain low at about 31% of capacity, net injections finally started over the last two weeks but at a slower pace than normal, Schneider analyst Balint Balazs said. European weather forecasts were mixed over the next week or so, but below-normal temperatures were expected for parts of the continent.

The explosive rally in gas prices comes as crude and product futures also found support amid a major pipeline outage in the United States, which has created fuel shortages along the East Coast. Colonial Pipeline Co. said it expects to have its system, which carries diesel, gasoline and jet fuel from the Gulf Coast, back online soon. If delays continue, prices could move higher, analysts said. July Brent crude futures gained 23 cents Tuesday to finish at $68.55.

Meanwhile, the Montoir LNG import terminal in Northwest France said supplies for the grid would be stopped until the end of May after an issue was uncovered on the plant’s delivery pipeline, according to operator Elengy. Dragon LNG in the UK also announced that all its capacity would be impacted by a maintenance outage planned from May 17-June 11.

U.S. export terminals continue to run at or near capacity given global fundamentals. Feed gas deliveries to American plants have continued to run well above 11 Bcf/d over the last week, according to NGI data.

The approval came at the request of Venture Global earlier this month as part of the commissioning process. Venture Global told federal regulators that the first LNG could be exported from Calcasieu Pass later this year, ahead of the original late 2022 date. The terminal would consist of 18 smaller modular liquefaction trains and have a capacity of 10 million metric tons/year (mmty).

Elsewhere in North America last week, Pacific Oil & Gas Ltd.’s Woodfibre LNG project signed another sales and purchase agreement with an affiliate of BP plc to supply 750,000 metric tons over 15 years. Woodfibre, which would be sited in British Columbia, has now secured buyers for 70% of its future 2.1 mmty capacity.

In Asia, political tensions between China and Australia continued to escalate last week. China’s National Development and Reform Commission suspended all activities under the China-Australia Strategic Economic Dialogue. The dialogue fosters opportunities in infrastructure and the energy, industrial and financial sectors.

Wood Mackenzie analysts said no natural resources projects would be impacted by the move. They added that China is too dependent on Australian commodities to ban imports. However, Bloomberg reported Monday that two of China’s smaller LNG importers have been told by the government to avoid buying new cargoes from Australia.