As the international natural gas trade continues to develop, Asian economies will drive global demand growth over the next five years, according to a new report from the International Energy Agency (IEA). 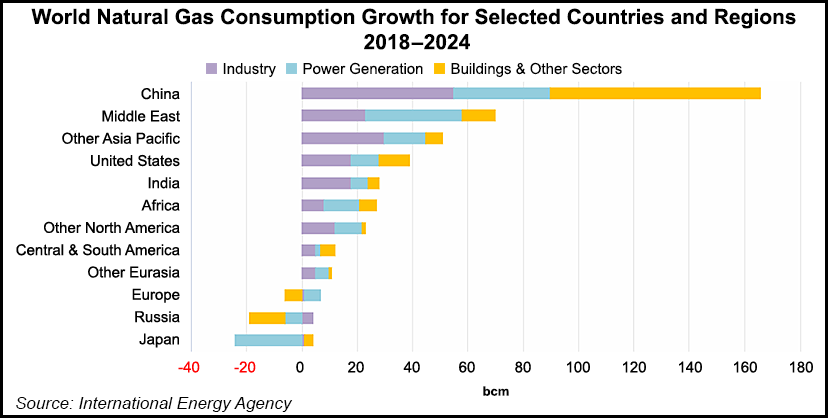 Global natural gas demand is coming off a record year after growing 4.6% in 2018, the fastest annual pace of growth since 2010, the IEA said in its Gas 2019 report. Gas accounted for close to half of the primary energy consumption worldwide in 2018 and is expected to rise by more than 10% over the next five years to top 4.3 trillion cubic meters (tcm) in 2024.

IEA expects China to account for more than 40% of global demand growth between now and 2024 as the Chinese government continues working to improve air quality and shift its energy system away from coal. Natural gas consumption grew 18% in 2018 in China, but growth is expected to slow to an average annual rate of 8% out to 2024 due to slower economic growth, according to the agency.

Other Asian nations should also see strong gains in gas consumption over the next half decade, especially countries in South Asia. This includes Bangladesh, India and Pakistan, where industrial sector growth is expected to drive rising consumption, including fertilizer production to serve growing populations, IEA said.

“Industrial use of natural gas, both as a fuel and a feedstock, is set to expand at an average annual rate of 3% and account for almost half of the rise in global consumption to 2024,” IEA said. “Power generation remains the largest consumer of natural gas, in spite of slower growth due to strong competition from renewables and coal.”

U.S. liquefied natural gas (LNG) exports are poised to play a key role in supplying the growing global demand in the coming years, according to IEA.

Incremental global supply will “come from both new domestic production in fast-growing economies but also increasingly from major exporting countries, led by the development of abundant shale gas resources in the United States,” the agency said. “The strong growth in LNG export capacity will enable international trade to play a growing role in the development of natural gas markets as they move toward greater globalization.”

Following years of decline, investment in LNG projects rebounded in 2018. A “large number of projects due to take final investment decision in 2019” should further support expansion of the global LNG trade. Still, IEA said more investment will be needed.

“The recent convergence in market prices in major regions gives an indication of the increasing globalization of the natural gas trade,” IEA said. “Establishing market-driven pricing mechanisms in fast-growing economies remains a challenge, however. Recent reforms in major markets are sending encouraging signals, but more will be required to ensure the sustainable market-driven development of natural gas in these countries.”

The IEA’s projections for China to continue accounting for a significant chunk of global LNG demand come as the United States and Beijing have been embroiled in a trade conflict that has made investors uneasy.

In retaliation against escalating tariffs out of Washington, DC, China has placed tariffs on U.S. LNG exports, which recently increased from 10% to 25%.

In a note last month, Moody’s Investors Service cautioned that the domestic LNG export sector is vulnerable to China’s tariffs.

“The tariffs could slow development of incremental LNG export facilities, because any reluctance on the part of Chinese energy companies to contract with U.S. exporters as a result of higher costs will reduce the number of global counterparties seeking additional U.S. capacity,” Moody’s said.

“Also, the construction of an LNG export facility runs into the billions of dollars and, to date, lenders have been willing to lend only to facilities with long-term contractual agreements. The tariffs’ effect on existing U.S. terminals is lessened by the fact that exporters have already contracted their terminal capacity, and therefore, any effect will likely be limited to spot cargoes.”