Plans to expand natural gas infrastructure across Asia could prove harmful to the region as the world transitions from fossil fuels, according to a new report by environmental advocate Global Energy Monitor (GEM). 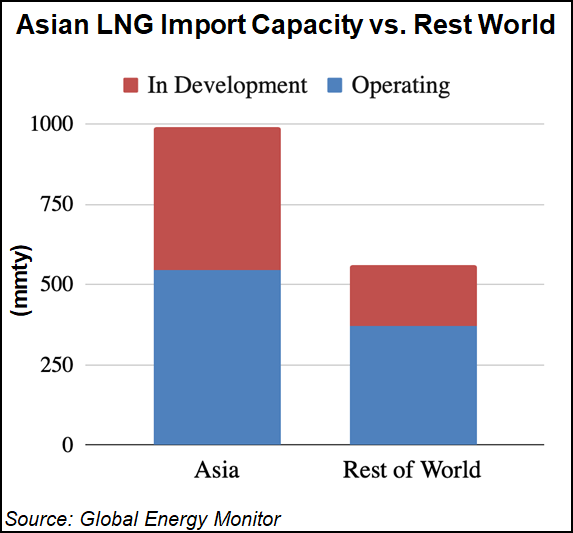 “Emissions from existing gas projects are already too great for the world to have at least a 50% chance of limiting global warming to 1.5 C,” said GEM Executive Director Ted Nace. “If built, these new Asian gas projects would lock-in emissions for decades, and worsen the long-term effects of climate change.”

GEM, a network of researchers focused on fossil fuel and alternative energy projects, originally was founded in 2008 under a different name by journalists and environmental advocates. The group later became part of the Earth Island Institute, which is focused on ecology and social justice projects, before becoming an independent nonprofit organization. Its work has generally cast a light on the harms of using fossil fuels.

Gas-fired power plants under development would nearly double the region’s existing capacity, or be equal in size to the output of all gas-fired power in Europe and Russia, GEM said. The group also found that Asian countries plan to develop 452 million metric tons/year (mmty) of new LNG import capacity, which comprises 70% of total capacity planned globally.

If run at full capacity, the import terminals and pipelines under development across Asia would enable enough consumption to produce 117 gigatonnes of carbon dioxide equivalent over their lifespans, GEM said.

Asia, with little domestic gas production, depends on imports. Much of the growth in the global gas market in the coming decades is forecast across the region, particularly in South Asia and Southeast Asia, which is also heavily reliant on coal. Natural gas is seen as a way to displace more carbon-intensive fossil fuels in Asia.

Despite climate pledges, the world’s need for electricity, heating, cooling and transportation will continue, said Vincent Demoury, spokesman for the International Group of LNG Importers.

“The hidden truth is that investments in intermittent renewables and zero carbon technologies will be insufficient to enable universal energy access in a sustainable way,” Demoury told NGI,  stressing that the energy transition will take decades.

“Today, almost one-third of the global population does not have access to clean cooking or heating and around 800 million people still lack access to electricity,” he said. “As the cleanest burning hydrocarbon, natural gas will therefore be part of the solution to reach net zero emissions while continuing to feed the world’s growing demand for cleaner and reliable energy.”

However, GEM said the record LNG prices and market volatility of this year could make the planned projects economically unfeasible if similar market conditions persist. The organization also warned that it could create additional costs for governments to decommission the facilities. The report found that public institutions provided more than $22 billion in financing for gas projects between 2014 and 2018.

Demoury added that natural gas is needed to back-up intermittent renewables and can easily be deployed now as alternative fuels are further developed.

Asia is also a top destination for U.S. LNG exports. The region accounted for nearly 42% of all American cargoes through August according to NGI data. Daphne Magnuson, a spokesperson for the Washington, DC-based Center for LNG said it’s likely to stay that way for the foreseeable future.

“Blocking the development of infrastructure to provide natural gas energy to four and a half billion people living in Asia is a fundamentally wrong approach to achieving a cleaner energy future,” she told NGI.  “The world needs natural gas to help facilitate the use of renewables and to replace dirtier fossil fuels.  It’s a central part of making the energy transition affordable and reliable for all.”