The rally in Asian natural gas prices has finally lost momentum as temperatures have warmed and supplies are creeping up across the region. 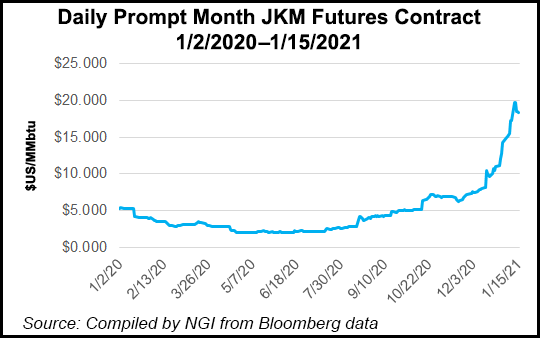 Spot prices fell below $10.00/MMBtu on Monday as the February contract gave way to March delivery. The decline followed a rapid climb from late November through last week when Japan Korea Marker (JKM) spot prices shot above $30 and hit an all-time high. Early last year, spot prices were below $3.00.

Epic cold had drained liquefied natural gas (LNG) inventories, while supply outages across the world and heightened demand in Asia made it more difficult to secure vessels for delivery. The supply crunch has eased now that traders have more time to get cargoes to the region later in February and March. Some firms are already reportedly offering more shipments in Asia.

Meanwhile, temperatures across many parts of China are set to rise after a historic cold snap. Japan’s power companies are rebuilding LNG inventories after they hit a low on Jan. 10, according to the Ministry of Economy, Trade and Industry. As cold cut LNG stocks, utilities across the country were forced to curb gas-fired electricity output, which pushed up power prices. While they remain higher than year-ago levels, electricity prices in the country have stabilized this week, according to Engie EnergyScan.

The JKM prompt contract reached nearly $20.00 early last week, rising from less than $8.00 about a month earlier, but it had slid to $18.309 by the time the February contract expired Friday as the rally lost steam. Futures prices for March and April are under $9.00.

As the Asian rally slowed in the middle of last week, European prices also retreated as supply and demand in the two markets have followed one another more closely in recent years. After four days of losses that started Wednesday (Jan. 13), European prices rose on Tuesday.

As more LNG cargoes were diverted away from Europe toward Asia to match skyrocketing demand in recent weeks, European storage inventories also fell below the five-year average over the weekend and stood at 60.7% on Sunday.

Talks of an icy blast if the polar vortex descends on North America, Europe and Asia later this month also have persisted and are likely to factor into the global gas trade in the weeks ahead.