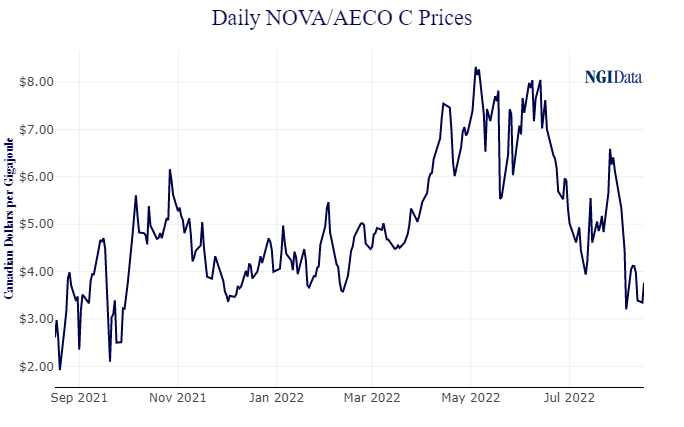 Spot prices at Henry Hub in the United States, meanwhile, topped $9.200 on Monday and were up 13% from the start of the month.

Volatile prices in Western Canada have recovered ground at points this month only to fall again amid the takeaway challenges.

Maintenance “should be expected to continue through August” – perhaps longer – “and until these systems are ramped up for the full winter capacity, AECO pricing will continue to come under pressure,” BTU Analytics analyst Nick Jones said. “The hairline balance of this network is narrow enough that any fluctuation in production or midstream capacity can be expected to drive high price volatility in the meantime.”

Western Canada’s pipelines “have been struggling more than usual under what has been an extraordinary production surge this summer, a time of year when output is typically less prone to major up-and-down swings,” King said.

King linked some of the challenges moving supply out of the region to “innumerable regulatory delays forcing construction schedules to shift, unintended overlapping of pipeline maintenance/construction work…and seasonal windows when only certain construction activities can take place,” King said.

“Even hotter-than-average weather, which has been baking Western Canada throughout July and August, could be playing a role by limiting the efficiency of compressors and making ground temperatures warmer than normal, which somewhat limits the amount of gas that can safely flow through the pipeline system without sending linepack pressures too high,” the analyst added.

“Just when natural gas prices are rallying across the world to multi-year or historic highs, another monkey wrench gets thrown into the workings of the Western Canadian gas market, imploding” prices, King said.

In the United States, production is only ticking up at a time when more U.S. supplies are needed to meet both domestic demand and the growing global liquefied natural gas market. Large-cap public exploration and production companies are under pressure from Wall Street to pay down debt and return excess capital to investors – rather than ramp up output to capitalize on high prices.

Meanwhile, Asian and European countries are boosting calls for LNG as they work to store gas for the coming winter. Europe, in particular, is buying gas with a sense of urgency. Countries across the continent are trying to find alternatives to Russian gas. This coincides with Western sanctions against Russia and its energy complex in opposition to the still raging war in Ukraine.

Russia also has curtailed flows to Europe in moves that it blamed on maintenance but that the International Energy Agency labeled retaliatory actions.

Outside of Canada, “if you are a natural gas producer in the U.S. or elsewhere, the present and near-term future for gas prices could not seem any brighter,” King said.