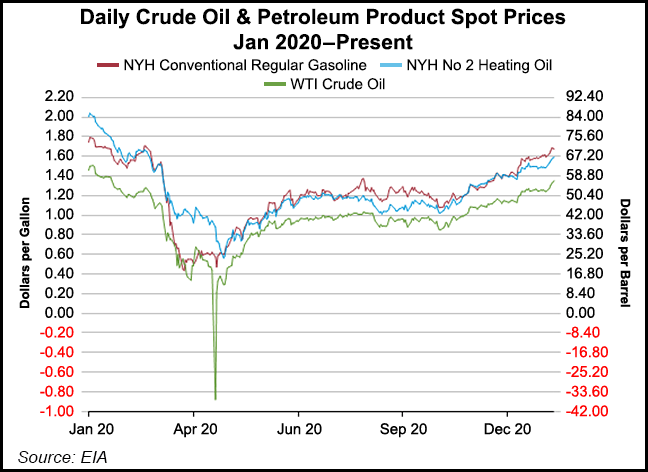 U.S. commercial crude oil inventories for the week ended Feb. 5 — excluding those in the Strategic Petroleum Reserve — decreased by 6.6 million bbl from the previous week, according to EIA’s Weekly Petroleum Status Report (WPSR). Crude oil storage has been lower for three consecutive weeks.

At 469.0 million bbl, EIA said, oil inventories were 2% above the five-year average for the comparable week.

Analysts at ClearView Energy Partners LLC said weekly inventories “declined sharply” and have fallen by a cumulative 148 million bbl, or about 10%, from last year’s peak level reached during the week ended July 17.

Inventories of propane and propylene, used for heating, decreased by 4.5 million bbl last week amid a fierce blast of winter across much of the Lower 48. Stocks of the fuel were 9% below the five-year average, according to the WPSR.

Total motor gasoline inventories, however, increased by 4.3 million bbl last week and are on par with the five-year average. EIA noted that demand for jet fuel and automobile gasoline remains soft, as it has since last spring, relative to pre-pandemic levels. Travel restrictions in place to slow the spread of the coronavirus – both government lockdowns and voluntary restraints by individuals – have curbed demand.

Overall consumption last week was 4% below the year earlier level, with demand for jet fuel down 24% year/year and gasoline off 10%.

Rystad Energy oil analyst Bjornar Tonhaugen said the inventory draw was expected and should provide additional support for the recent strength in oil prices. That noted, he said the rally in prices appears overly dependent on recent supply cuts agreed to by Saudi Arabia.

West Texas Intermediate crude topped $58/bbl in intraday trading Wednesday, up more than 20% from the start of the year.

“The current price levels are healthier than the actual market and entirely reliant on supply cuts, as demand still needs to recover” on a global level, Tonhaugen said.

The Organization of the Petroleum Exporting Countries and its allies, aka OPEC-plus, this month maintained lower near-term production targets. The cartel had previously called for its members to keep supply levels steady this month, with the exception of leader Saudi Arabia, which agreed to voluntarily trim output by 1.0 million b/d in February and March to offset light global demand.

A strong demand recovery – compared to pre-pandemic levels – may have to wait until at least summer, when enough people have been vaccinated to end widespread virus outbreaks, Tonhaugen said.

In a supplement to its monthly Short-Term Energy Outlook (STEO) report, EIA forecasted global oil consumption would gather momentum later this year, growing by 5.6 b/d, or 6%, for the full year. The United States will account for 1.4 million b/d of that growth, the agency said, based on an expectation for widespread inoculations.In total, the agency expects global oil consumption will average 97.8 million b/d this year, which would mark a 3% decline from the 2019 level.