In an abbreviated four-day trading week following the Martin Luther King Jr. holiday on Monday, weekly cash prices recorded a double-digit drop as temperatures climbed across much of the Lower 48 and heating demand eased. 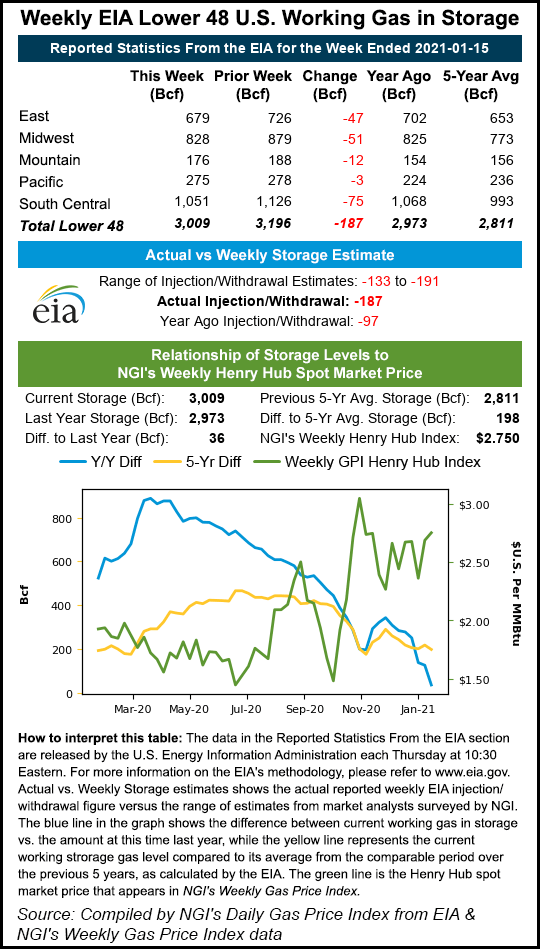 Comfortable conditions moved in early in the week and stuck around until Thursday, notably including highs in the 40s and low 50s at midweek in the northern Plains and over swaths of the Midwest. Those temperatures were well above usual highs in the 20s and 30s for these key sections of the country that draw heavily on natural gas to power furnaces.

Heating demand dwindled as a result.

Spot prices were under particularly heavy pressure early in the trading week, falling nearly 30 cents over the course of Tuesday and Wednesday.

For the week ahead, Maxar’s Weather Desk was expecting lows ranging from near zero to the teens in the Midwest and parts of the East, potentially fueling momentum in cash prices in coming days.

EBW Analytics Group, however, noted that the mid-range outlook was murky, given substantial shifts in weather models over the past week.

“This exceptionally high model volatility could result in continued sharp price swings,” EBW said. “It stems from strong bullish signals in the Arctic and over Greenland, coupled with uncertainty in the Pacific and the tropics.”

Natural gas futures struggled to find footing throughout the week, as the volatile forecasts for the rest of this month and the first few days of February ultimately pointed to lighter heating demand than meteorologists had expected as recently as mid-January.

Futures lost ground each day of the trading week.

Intense cold was still expected over most of the northern United States in the final full week of January, but unlike earlier forecasts, meteorologists were not looking for freezing conditions to extend as far south as Texas or last into February. A warming pattern is projected to return by early next month, impacting demand for gas-powered heating.

“Warm weather continues to be the fly in the ointment” for gas prices, analysts at Tudor, Pickering, Holt & Co. (TPH) said Friday.

Degree days over the first three weeks of January tracked about 11% below the five-year average, resulting in residential/commercial demand falling 5.5 Bcf/d below five-year norms, according to TPH estimates.

“If the seasonal warmth continues, we see about 300 Bcf of lost residential/commercial demand for the balance 1Q2021, which would push our end of season storage forecast to 2.2 Tcf and would drive our fiscal year 2021 pricing expectations down by about 25 cents,” the TPH analysts said.

On Friday, the U.S. Energy Information Administration (EIA) reported the steepest pull from stockpiles of the season, a withdrawal of 187 Bcf for the week ended Jan. 15. The print far exceeded the 97 Bcf pull recorded in the year-ago period and a five-year average withdrawal of 167 Bcf.

The result, however, had no impact on market sentiment.

The February Nymex contract settled at $2.446/MMBtu on Friday, down 4.5 cents from the previous day’s close and down more than 10% from the prior week’s finish.

During the EIA covered week, liquefied natural gas export levels were strong and temperatures were cool enough in the South to boost national demand. By region, the South Central withdrawal of 75 Bcf led all others.

But traders fixated instead on the bearish weather outlook and the relatively plump storage levels that remain. The withdrawal for the Jan. 15 week decreased inventories to 3,009 Bcf, above the year-earlier level of 2,973 Bcf and above the five-year average of 2,811 Bcf.

“We still need to see weather back away from the big warm look in order to get anything going to the upside,” Bespoke said.

Near-term forecasts called for low temperatures to drop over the weekend.

“Cool to cold conditions will spread across the northern U.S.,” with highs in the 20s to 40s and lows near zero to 30s for stronger national demand, NatGasWeather said.

“The West will be cool and unsettled” through the final week of January “with areas of rain and snow and highs of 20s to 50s,” the firm added. “After a brief break Monday across the Midwest and East, another chilly cold shot will arrive mid-next week,” for a swing back to stronger national demand.