Raymond James & Associates Inc. analysts are standing by their call for West Texas Intermediate oil prices to reach $50/bbl later this year in the face of a futures strip that is “simply unsustainable,” but until the price cavalry arrives, the U.S. rig count is going to be hacked even more as producers cut back their spending. 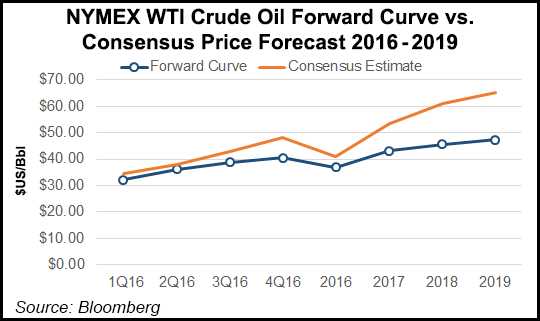 Analysts J. Marshall Adkins, Praveen Narra and Victor Kalivas said in a note Monday they don’t believe the current crude price strip will have a meaningful impact on exploration and production (E&P) drilling and completion spending budgets this year because it would be too little too late.

“With extremely depressed oil pricing likely to cause oilfield spending and therefore, activity, to fall off a cliff in early 2016, we do not believe oilfield spending can catch up with rising cash flows in the back half of the year. The need for E&Ps to see ‘sustained’ higher crude prices, as well as constraints on the oilfield service side of the industry, particularly labor, will likely see rig additions delayed.”

The trio reduced its forecast for the U.S. rig count this year from a forecast made only a month ago, when analysts said they expected the domestic rig count to average 620 rigs, down 36% from 2015 (see Daily GPI, Jan. 4).

“Low prices are curing low prices and we are setting up for the cycle to turn,” Adkins said.

With domestic E&P budgets using the current oil strip price below $40/bbl, drilling and completion spending budgets initially could drop by 60-70% y/y, much lower than Raymond James current forecast that called for a 42% decline in 2016 oilfield spending.

Even if prices were to strengthen, E&P spend would lag prices if only because of “logistical and personnel limitations,” said the Raymond James team.

No “meaningful” ramp-up is expected to get underway in domestic drilling until late this year because:

“All-in, we expect to exit 2016 with just 700 rigs working, adding only 300 rigs in the second half of the year,” Adkins said. “While a lower rig count will mean a much more challenging 2016 environment for oilfield service companies, the lower activity this year should still lead to even more robust growth in 2017/2018.”

To maintain a capex-to-cash-flow ratio in the historical range of about 130%, E&Ps would need to cut spending by another 30%, or $24 billion overall, from the most recent estimates, based on the firm’s low-case scenario — a 50% reduction from 2015 capex levels. The low-case price scenario assumes $40/bbl oil and $2.50/Mcf natural gas.

IHS estimated the current capex estimate for the group totals more than $78 billion, 23% below the $101 billion spent in 2015. Independent analysts including Raymond James have for the past several weeks said E&P capex and cash flow could plunge significantly this year without higher prices (see Shale Daily, Jan. 20).

Using the low-case price scenario, O’Donnell estimated that North American E&Ps would spend 188% of cash flow, versus 133% under the base-case scenario, which assumes $50 oil and $2.75 gas.

The small E&Ps are projected to spend 174% of cash flow, which “will be problematic since they already have highly leveraged balance sheets and cannot afford further balance sheet deterioration,” O’Donnell said. “The result could be forced asset sales at bargain prices, sizeable staff layoffs and, in the worst cases, bankruptcies.”

The smaller E&Ps would need to reduce capex this year “by at least 64%” y/y, or 42% under the base-case price scenario. The IHS high-case scenario assumes $60 oil and $3.00 gas but at current prices, “even our low-case scenario could be generous,” O’Donnell said.

“Under our low-case scenario,” he said, “we expect 2016 capital spending for the group will exceed cash flow for all companies, with the large and small peer groups spending 195% and 174% of cash flow respectively, compared with a slightly more conservative 157% for the midsize E&P companies.”