Despite robust U.S. export levels and signs of stronger Gulf Coast industrial demand, natural gas futures drifted lower on Friday, finishing in the red for only the second time during the trading week. The April Nymex contract settled at $2.557/MMBtu, down 1.3 cents day/day. 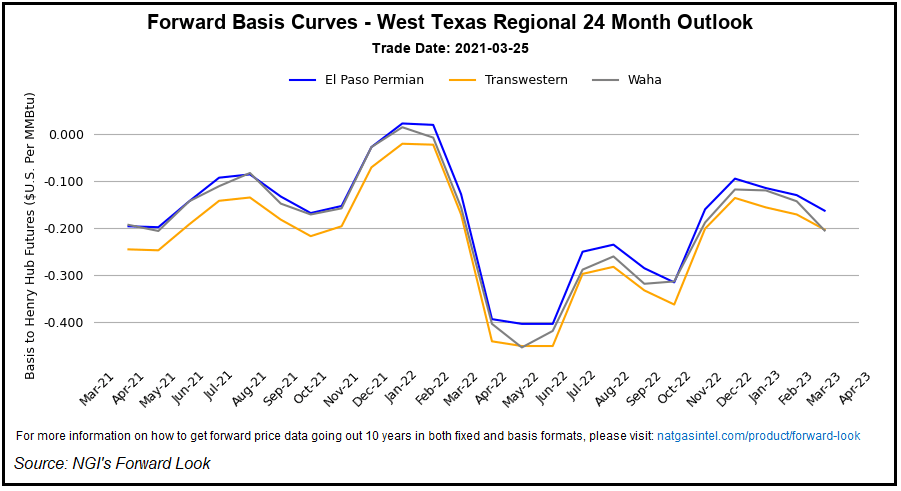 May, however, inched up three-tenths of a cent to $2.619. The April contract rolls off the board following Monday’s trade. If prices were to hold up through then, the new prompt month would open comfortably ahead of $2.600.

Demand for U.S. liquefied natural gas (LNG) held strong Friday, as it has for most of this month amid dwindling supplies and increasing need for imports in Europe. LNG feed gas volumes approached 11.6 Bcf on Friday, according to NGI data. Volumes held above the 11 Bcf threshold all week, as they have over a majority of days in March.

This has helped to offset modest weather-driven demand domestically, as the Lower 48 segues into the spring season, when heating needs fade and most Americans only begin to run air conditioners amid mild temperatures.

Bespoke Weather Services said Friday “below-normal demand is still favored quite easily over the next few weeks.” Bouts of rain and thunderstorms were expected to inject doses of regional heating demand in the week ahead. Overall, however, weather is expected to play a minor role for the next few weeks in terms of driving use of natural gas. That outlook kept futures in check Friday.

The latest U.S. Energy Information Administration (EIA) storage report showed a withdrawal of 36 Bcf for the week ended March 19. The print was steeper than predictions for a pull in the low- to mid-20s, and it marked the first result on the optimistic side of estimates found by major polls in a month.

“It appears likely that returning Gulf Coast industrial demand for natural gas helped drive the bullish outcome,” analysts at EBW Analytics Group said. They added that further industrial gains lie ahead. “We estimate that 1.0-2.5 Bcf/d of industrial demand for gas remains offline. As this returns online in the coming weeks and months, the weather-normalized supply/demand balance of natural gas may continue to tighten.”

The decrease in stocks for the March 19 week lowered inventories to 1,746 Bcf, compared with the year-earlier level of 2,009 Bcf and the five-year average of 1,824 Bcf.

“While this was the fourth loose stat in a row, it was tighter than the previous three weeks as refinery/petrochemical demand continues to normalize,” Wood Mackenzie analyst Eric Fell said after the EIA report. The analyst added, “It is worth reminding those who rely heavily on year/year comparisons that we are beginning to lap the large industrial demand losses related to the Covid-19 shutdowns that began last March.”

Analysts at Tudor, Pickering, Holt & Co. (TPH) said the latest EIA print could mark the end of the withdrawal season. They preliminarily estimated an injection of 12 Bcf for the next EIA report.

“If this week does end up concluding the withdrawal season, we finish at a cumulative draw of 2.17 Tcf, 26% ahead of last year and the highest since the infamous winter of 2013/14,” the TPH analysts said. “More telling is the large cumulative draw comes despite total degree days only 1% ahead of norms, indicating material undersupply in the market.”

Unless supply ramps up, the TPH analysts said Lower 48 stocks could hover around 3.25 Tcf by the end of the upcoming injection season. “If this prognostication proves to be reasonably accurate, we expect a meaningful rise in summer pricing ($3.00-3.25/MMBtu) in order to drive gas-to-coal switching and force more gas into storage ahead of winter,” they said.

Lacking a catalyst for heating demand, cash prices on Friday declined across every region.

Leading into the final trading session of the week, weather proved exceptionally active with a deadly thunderstorm that spawned widely destructive tornadoes across swaths of Alabama and neighboring states in the Southeast late Thursday.

The storm, however, did not counter mild temperatures in the region or stimulate added demand for natural gas.

Forecasters expected light national demand through the weekend with high temperatures ranging from the 60s in the East to 80s across the South and areas of the West, AccuWeather forecasts showed. Highs in the 50s were expected over much of the Midwest, with cooler but moderate 40s in parts of the Mountain West.

The northeastern corner of the United States was expected to get doused with snow early in the weekend, according to AccuWeather, followed by a blast of cold rain and potentially more snow by Monday. But the wintry mix was forecast to be contained to the northern reaches of New England. Major Northeast markets such as Boston were expected to experience highs in the 50s over the weekend and into Monday.