Additional infrastructure is critical to balancing the U.S. natural gas market as the country is already awash in supplies, with more on the way, but selling that story to investors is difficult, developers of second-wave liquefied natural gas (LNG) export projects said at a recent conference in Houston. 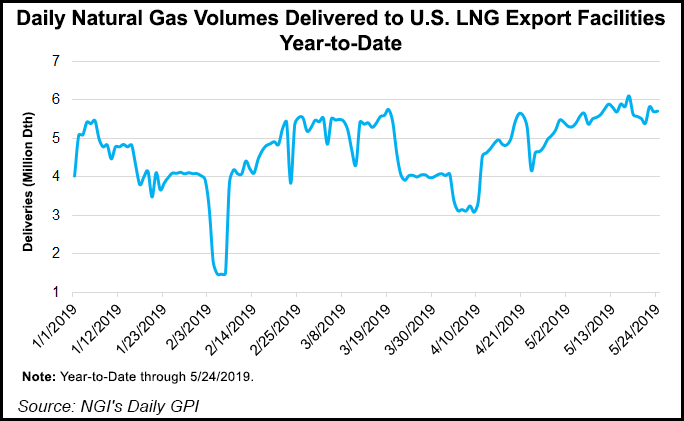 Natural gas production is set to grow by 21 Bcf/d by 2024, with a lot of the gas moving to the Gulf Coast for export, according to RBN Energy. Meanwhile, feed gas demand from LNG facilities is expected to keep rising to an estimated 7 Bcf/d this year and 12 Bcf/d-plus by 2024 from around 3 Bcf/d in 2018.

More than 20 announced projects totaling roughly 35 Bcf/d are looking to catch the second wave of gas exports over the next decade. FERC has already approved several.

Tellurian also has entered into memorandums of understanding (MOU) with Vitol SA to supply 1.5 million metric tons/year (mmty) and with Petronet LNG Ltd. India, and Petronet is considering an equity investment in Driftwood. The company was expected to reach FID in June, but management has indicated that deadline could slip.

Sempra management expects to reach FID on Port Arthur in early 2020, but that is based on securing additional customer commitments. Port Arthur has a 2 mmty deal in place to supply Poland’s state-owned Polskie Gornictwo Naftowe i Gazownictwo SA, aka PGNIG.

“There has been a lack of a unified voice in the natural gas industry in the last 10 years,” Simoes told nearly 600 conference attendees when asked about some of the challenges for the U.S. LNG industry. “Natural gas lifts people out of poverty. That message needs to be said every day.”

Simoes, who spent 20 years at Cameron LNG developer Sempra Energy and led the company’s LNG and midstream team for seven years before moving to Tellurian in April, said, “the best mistake we ever made was building all the import terminals.”

Indeed, existing LNG export projects, most begun as the United States faced gas shortages in the early 2000s, originally were built as import terminals. Cheniere Energy Inc.’s Sabine Pass facility was set to become the largest such facility in North America after FERC gave clearance for construction in 2005; it began commercial operations in April 2008.

Fast forward six months, however, and Cheniere found itself asking FERC for authorization to export LNG, as domestic gas prices that had fallen below those of international markets in Europe and Asia resulted in fewer cargoes arriving at the Louisiana terminal. Freeport LNG also sought permission to reverse the spigot in 2008, as the Lower 48 unconventional gas boom kicked into high gear.

Now, it’s those previous import terminals that are reaping the benefits as exports are set to quadruple over the coming years, reaching 84 mmty by 2025 based on currently sanctioned projects.

Some of the fastest growing demand markets are countries that have restricted power usage or rely on coal, but which have goals to reduce emissions. In addition, Cheniere management indicated earlier this month that there are positive signals for additional growth in major demand markets like Japan and South Korea, where 2.3 GW of older coal-fired power plants are set to shut down in the first half of 2019.

Pakistan and Thailand each recorded double-digit import growth year/year during the first quarter to support their growing economies and declining indigenous gas supply, while other countries including Bangladesh, India, Taiwan and others continue to add regasification infrastructure.

China is the largest buyer of LNG, but its trade dispute with the United States is seen complicating future LNG exports.

However, unlike greenfield projects on the drawing board, Cheniere hasn’t had a problem finding buyers. It has 18 foundation customers, only one of which is China.

In fact, the Houston-based developer has indicated it would likely move forward with a proposed expansion of its Corpus Christi export facility in South Texas even without China as a customer. An FID on the 9.5 mmty expansion is expected in the spring of 2020, Cheniere’s Corey Grindal, senior vice president of gas supply, said at xPortCon.

Grindal, who joined a panel discussion with Simoes and LNG Ltd. CEO Greg Vesey, said he considered the trade spat short term in nature, but there is “some switching going on in the world” as Chinese buyers are swapping or selling cargoes.

Vesey late last year cited the trade war in the decision to delay FID on the company’s proposed Magnolia LNG project in Lake Charles, LA. He reaffirmed that view at the conference. “We will not execute agreements until this is over.” In the meantime, the company continues “working feverishly” to find buyers after receiving its FERC certificate two years ago.

When asked at what point developers of projects not yet sanctioned may throw in the towel to export U.S. gas, Vesey said, “We’ll be as cost effective as long as we can. There is a robust future for LNG.”

Simoes agreed. “If you have a solid, credible story, you power through.”

Tellurian was co-founded in February 2016 by Charif Souki, who previously had founded and led Cheniere until December 2015 but didn’t turn a profit during its then 19 years of business. In 2018, Cheniere reported a $471 million income on nearly $8 billion of revenue.

It’s unlikely Souki would stop working toward sanctioning Driftwood, said RBN’s Rick Smead, managing director of advisory services. “I’ve known Charif for many many years, and if there’s anything I know, it’s that Charif doesn’t have a towel.”