The two-month lockdown in Mexico for the Covid-19 epidemic that began in April was devastating for the country’s economy, as well for its state oil and gas firm Petroleos Mexicanos (Pemex), but the promised end to the stay-at-home orders on Monday (June 1), turned out to be fool’s gold for many. 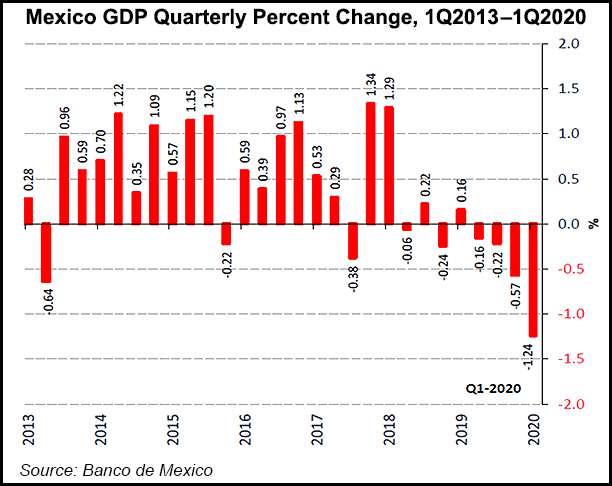 As cases of Covid-19 and subsequent deaths have risen, the government in many parts of Mexico has tightened the screws of the lockdown, not relaxed them. As a result, the economy has cause for alarm.

Pemex meanwhile reported on Sunday that 89 of its workers and two of its contractors have died from Covid-19.

Government figures for May were not yet available, but the central bank, Banco de México, said in its quarterly report the economy was likely to decline this year by 8%.

The downturn is already shaping up to be the worst recession of modern times, worse than the 1991-92 collapse after the nation’s oil boom went bust, and worse too than the 1994 debt crisis.

Today, Mexico has a more fully formed democracy, and the economy’s backbone is no longer based on raw materials but modern industry, with natural gas from the United States part of its lifeblood.

At the start of June, mining, construction work and manufacturing in the auto industry were deemed as “essential” and the three sectors were free to get back to work as soon as possible, providing safeguards were assured.

Genscape Inc. said pipeline exports from the Lower 48 to Mexico averaged an estimated 4.7 Bcf/d during May, down from the 4.95 Bcf/d reported in May 2019 by the Energy Information Administration, but so far in June, U.S. to Mexico exports were already above the 5.1 Bcf/d mark.

Most automakers have announced they are ready. Nissan Motor Co., which tops the auto sales charts in Mexico and bases most of its production in the central state of Aguascalientes, said it had met all the government requirements on health and safety, and all of its operations in North America are back in production.

Others followed suit, with most plants gearing up for full production, including Ford Motor Company, whose manufacturing is based in the northern state of Sonora; Bayerische Motoren Werke AG, or BMW, in the central state of San Luis Potosí; Fiat Chrysler Automobiles N.V. outside of Mexico City and in the northern state of Coahuila; and Toyota Motor Corporation in Baja California and in central Mexico in the colonial heartland state of Guanajuato.

Volkswagen and sister company Audi AG said their plants would be operating at all systems by the middle of June. The Volkswagen plant in the state of Puebla, south of Mexico City, is the largest manufacturing facility in the Mexican auto industry.

As big business gets back in Mexico, however, the government has faced criticism for not doing enough to help the unemployed or those in the informal sector. Hopes were high, therefore, when Hugo López-Gatell, the deputy Health Minister and de facto coronavirus czar, said there would be an end to the lockdown at the start of this month.

López-Gatell urged caution in relaxing the lockdown. Social distancing rules would still be observed, he said, and the virus hotspots would require particular care. These include the Mexico City megalopolis, which includes the capital and the surrounding urban areas of the State of Mexico, as well as the border city of Tijuana, in Baja California; Tabasco, the traditional oil country; and the tourism mecca of Cancun.

A “traffic light” system was devised to phase in new rules with “red” for areas and states where the lockdown was still to be enforced, “amber,” to indicate a partial relaxation and include opening most small businesses, and a “green” light for regions ready to return to normal.

As the deadline approached, however, it became clear that the reality was nothing new at all. The sole exception was the state of Zacatecas, which was rated as amber. Zacatecas houses the world’s most valuable silver mine, Peñasquito.

If anything, rules are stricter. Under the old system, the use of face masks in the streets of the capital had been optional. Beginning last Monday, they were listed as obligatory. In addition, the authorities recommended, though did not enforce, the use of face screens known as “caretas” or goggles.

As the coronavirus epicenter has shifted to Latin America, the crisis is far from being under control in Mexico. The country’s daily death tally has now surpassed that of the United States.

Meanwhile, López Gatel said seven of the nation’s leading cities had exceeded the forecasts in terms of confirmed deaths and cases of Covid-19. The national death toll has reached more than 10,000 and the number of confirmed cases has exceeded 100,000. Mexico’s population is 126 million.

According to figures compiled by the organization Our World In Data, Covid-19 has claimed 315 deaths/million people in the United States, while in Mexico the figure is 90/million. There is a caveat, however, as official figures have been questioned by independent think-tanks that have claimed that if more people were tested, the death toll could be four times as high.