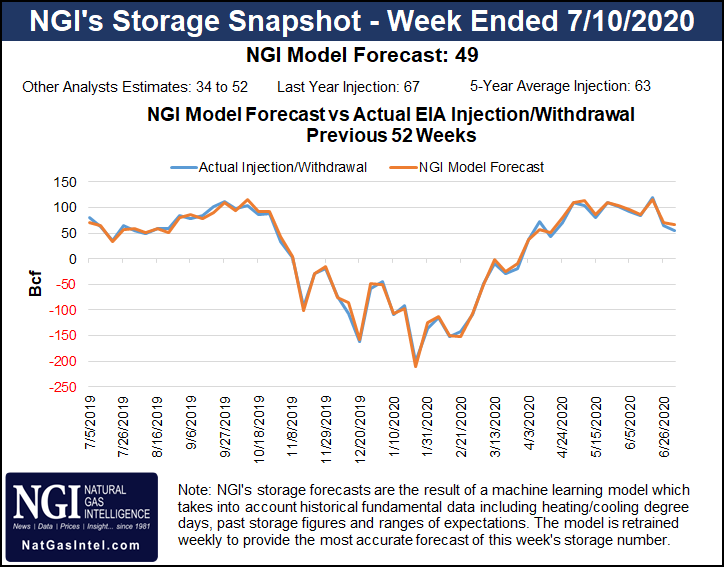 Bespoke Weather Services said that Wednesday’s weather models moved “a little cooler in the near term” compared to a day earlier, with total gas-weighted degree days (GWDD) for the current week now under 90 — after being projected as high as 104 at one point earlier in July.

“This illustrates the difficulty the models are having regarding intensity of heat,” the forecaster said. “It is absolutely a hot pattern, still on pace to match or edge out July 2011 for the highest July GWDD total on record, but models keep projecting too much heat in the medium range, with this week being the prime example. Next week’s upper level pattern looks stronger, and the pattern should remain biased hotter than normal into August, so weather definitely is not bearish by any means. Models just may continue to overshoot some at times, given recent biases.”

Production and liquefied natural gas (LNG) volumes were stable day/day, Bespoke added, and power burns were a little stronger, though off their peak on a weather-adjusted basis.

“All in all, the balance looks improved over last week, which we feel should limit downside in the near term, barring a large cooler change in the weather forecast or a major bearish surprise” in Thursday’s Energy Information Administration (EIA) report, the firm said.

The storage report for the week ending July 10 could signal how much cooling demand is motivating power burns and gas demand.

Ahead of the report, a Bloomberg survey found injection estimates ranging from 38 Bcf to 50 Bcf, with a median of 47 Bcf. A Reuters poll showed a low estimate of 34 Bcf and a high of 52 Bcf with an average of 47 Bcf. NGI estimated an injection of 49 Bcf.

The forecasts compare with a 67 Bcf storage build in the same week in 2019 and a five-year average injection of 63 Bcf. EIA previously reported a 56 Bcf injection for the week ended July 3.

LNG remains an area of weakness while the coronavirus pandemic extends deep into the summer, providing added reason to scrutinize the injection result. Virus outbreaks have chilled economic activity in key U.S. LNG export destinations within Europe and Asia, hampering supply/demand balances since the onset of the pandemic earlier this year.

But natural gas pipeline exports to Mexico are a relative bright spot. EBW Analytics noted Wednesday that exports to Mexico have set daily records this year of 6.0-plus Bcf/d, though weekly averages are below 5.8 Bcf/d.

“Since April, exports have averaged 0.35 Bcf/d higher than 2019,” EBW said. “Mexico has recently connected the Wahalajara pipeline, enabling U.S.-sourced gas to move further south into higher-demand regions. While increased flows have yet to appear, once fully operational the pipeline may add 0.5 Bcf/d or more to Mexican exports.”

The firm said that another severe coronavirus outbreak in Mexico could, of course, hamper demand. “As a result, we conservatively estimate only 0.5 Bcf/d of year-over-year gas export increases for the remainder of summer, with room for upward revisions to support Nymex futures.”

Spot prices varied by region, with gains in West Texas but some substantial losses in the Northeast and Appalachia.

The consistency of intense heat is driving strong cooling demand across much of the country and supporting prices in Texas and much of the South.

“Impressive heat continues from California to Texas with highs of 100s to 110s for very strong regional demand. Hot conditions also persist over the Southern Plains, South and Southeast with highs of mid-90s but also humid for uncomfortable conditions,” NatGasWeather said.

“The combination will push national power burns to a stout 43-45 Bcf the next several days,” the forecaster added. “It would be more impressive if not for a weather system exiting the Northeast and new one arriving” in the Midwest that “has prevented the hot southern U.S. ridge from expanding as far northward this week.”

But hot high pressure “will expand to include the Great Lakes and Northeast late this week and this weekend with highs of 90s stretching from Chicago to New York, while hot and humid over much of the rest of the U.S.,” NatGasWeather added. “This will increase national demand to very strong levels and power burns near or over 45 Bcf/day.”