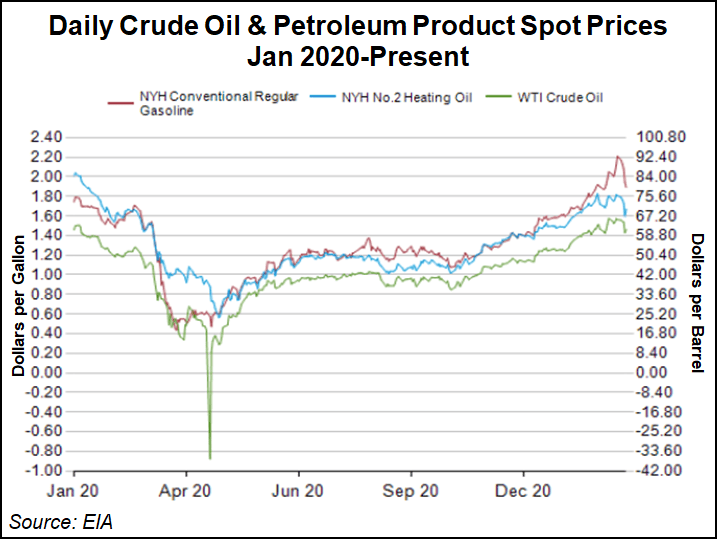 In its Weekly Petroleum Status Report (WPSR), EIA said overall demand in the week ended March 19 fell 1% week/week and was off 4% when compared with a year earlier. The year/year drop was driven largely by a 29% decline in jet fuel consumption, EIA said. While vaccines are clearing a path to recovery, travel remains light amid the ongoing coronavirus pandemic and fuels used for air travel have for the past year dragged on petroleum demand.

In fact, Gulf Coast refiners continued to operate below normal levels in the wake of the Artic freeze that derailed the Texas energy sector in February. But levels recovered some last week. EIA said crude oil refinery inputs averaged 14.4 million b/d, up 1.0 million b/d from the previous week’s average.

Refineries operated at 82% of their operable capacity last week, down from 87% a year earlier but up from 76% the prior week.

Total petroleum demand over the last four-week period averaged 18.8 million b/d, down 11% from the same period in 2020. Over the past four weeks, EIA said, jet fuel demand was down 35% from a year earlier.

U.S. crude production, meanwhile, averaged 11.0 million b/d last week, up about 100,000 b/d from the prior week but about 2.0 million b/d below the year-earlier level, the agency said.

The bottom-line result: Domestic commercial crude inventories for the week ended March 19 — excluding those in the Strategic Petroleum Reserve — increased by 1.9 million bbl from the previous week. At 502.7 million bbl, inventories were 6% above the five-year average last week.

Oil prices have rallied this year on expectations for stronger demand, including for gasoline and jet fuels, as travel increases alongside a recovery from the pandemic. Vaccines are in increasing supply and inoculation levels are mounting.

However, herd immunity likely remains months away, and in the meantime, new virus outbreaks, particularly in Europe, have analysts concerned that a demand recovery could take longer to arrive. Many had previously anticipated a jump by summer. That may not occur until later in the year. As a result, oil prices were under pressure in recent days.

“Extended lockdowns in Europe are not going away very soon, and as Easter season is ahead of us, there is extra concern that infection rates may rise further,” Rystad Energy analyst Bjornar Tonhaugen said Wednesday. “If lockdowns continue for long, it is almost certain that oil demand will not recover as quickly as thought.”

On Wednesday, however, both the West Texas Intermediate and Brent crude price benchmarks were up more than 5% in intraday trading following news that a massive container ship was stuck in Egypt’s Suez Canal, blocking tanker traffic and oil and liquefied natural gas deliveries.

The grounded ship “is creating some distortion in the flows of crude and products that are transported through the canal and such speed bumps are having a rollover effect on oil prices, as the product will not reach its buyers as quickly as expected,” Tonhaugen said.

However, he added, “the effect is likely to be small and transient, as there are alternative sources and shipping routes for crude products.”