China’s liquefied natural gas (LNG) imports have continued to increase and are above 2019 levels year-to-date as spot prices in the region have plummeted, U.S. import tariffs have been waived and industrial demand recovers from the pandemic. 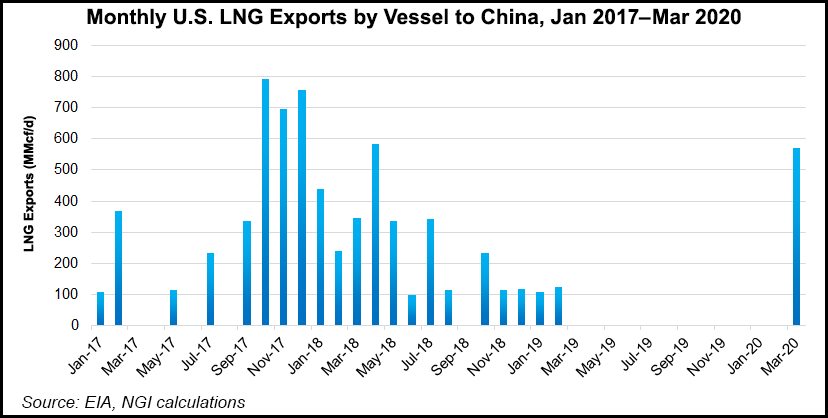 Australia and Qatar are among some of China’s biggest gas suppliers, but the United States has finally seen its market share increase this year after a preliminary trade agreement in January eased tensions that had halted exports to the country. China took in 10 cargoes from the United States between April and May, according to Wood Mackenzie.

By value, China purchases about one-third of all Australian exports, and demand for energy products has boomed in the wake of the Covid-19 outbreak earlier this year, according to Wood Mackenzie. The firm’s Asia Pacific Vice Chair Gavin Thompson said in a blog post last week that through May versus the first five months of 2019, iron ore imports were up 8%, while LNG was up 9%.

April marked the first time in over a year that an LNG cargo from the United States arrived in China. Meanwhile, Australian consultancy EnergyQuest noted last week that Chinese imports from Australia were 2.8 million tons (Mt) in April, the highest level from Australia on record.

Analysts with Tudor, Pickering, Holt & Co. said recently global LNG trade in May was 7% above their forecast, “led by continued strength out of China” and stronger European flows. Chinese demand, analysts said this month, “appears to be fully back and then some,” up 10% month/month and 25% year/year, “driven largely by a swapping of cheaper LNG volumes in place of pipeline imports,” which were down 20% year/year.

Spot prices in North Asia have fallen precipitously this year from the demand destruction caused by the coronavirus and a steady flow of supplies to the region. While Chinese LNG import growth continued in 2019 at a slower annual pace of 14% compared to 2018, the country remained the world’s second largest LNG importer, according to the International Group of Liquefied Natural Gas Importers.

China took in 61.7 Mt last year and had a 17.4% market share. U.S. exports to the country have resumed at a time when they’ve fallen off elsewhere amid the global supply glut and price rout that has made American LNG uneconomic.

However, after China was first rocked by the pandemic earlier in the year, when some of the country’s leading buyers declared force majeures, faced falling demand and higher-priced oil-linked contracts, intake has recovered quickly. Buyers now appear to be forgoing contractual volumes for cheaper spot purchases.

Bloomberg New Energy Finance said in a note last week that China Petroleum & Chemical Corp., aka Sinopec, had a 10% year/year increase in its May LNG deliveries, while contractual volumes from the Australia Pacific region fell by 29%. Bloomberg also reported on Tuesday that one of the country’s largest private importers, ENN Energy Holdings Ltd., intends to increase spot purchases for the remainder of the year instead of searching out term supply contracts.