As 2020 draws to a close, the door remains closed for new exploration and production (E&P) contracts in Mexico’s oil and gas sector, with little visibility as to when they might resume. 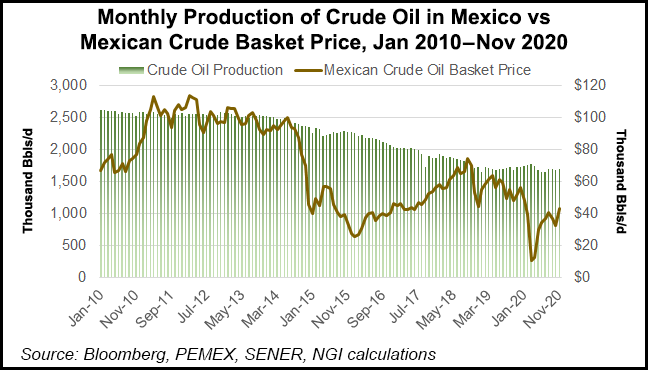 With bid rounds, farmout tenders and service contract migrations frozen until further notice by President Andrés Manuel López Obrador, upstream activity will in the meantime be limited to state oil company Petróleos Mexicanos (Pemex) and the 111 E&P contracts awarded from 2015-2018 under the previous government following the 2013-2014 market-opening energy reform.

A recently published five-year plan for oil and gas auctions published by energy ministry Sener offered some hope that bid rounds may return, although Sener may have just released the document in order to comply with the law, according to analysts at Talanza Energy Consulting.

In a decree published Monday in Mexico’s federal register, López Obrador authorized the deferral until January 7 of production-sharing duties owed to the government by Pemex that were supposed to be paid in November.

The relief was not extended to private sector operators, whom López Obrador has antagonized since taking office in December 2018.

To justify the extension, López Obrador cited the unexpected decline of Mexico’s crude oil export basket price due to the destruction of global oil demand caused by the Covid-19 pandemic. The basket price averaged $38.07/bbl in the third quarter, down 29.6% year/year.

The deferral follows legislation introduced in December by Senator Armando Guadiana that would see Pemex’s profit-sharing duty reduced to 35% from the current effective rate of 58%.

However, even if the tax break is approved, Pemex will likely require additional government support in order to increase capital spending without taking on more debt, Fitch Ratings analysts said recently.

Pemex’s total financial debt stood at $110.3 billion as of September 30, up 24.9% from year-end 2019. Pemex said the increase was “mainly due to the drawn amounts from credit facilities and the depreciation of the Mexican peso against the U.S. dollar during the period.”

Pemex natural gas production was flat year/year at 3.68 Bcf/d in October, while oil production dipped to 1.63 million b/d from 1.66 million b/d in the year-ago month.

As it has throughout its history, Pemex continues to devote most of its upstream capital spend to oil-directed projects, with the main exception being the Ixachi natural gas and condensate project in Veracruz state.

The improved natural gas pricing outlook in recent months has made production of natural gas not associated with oil drilling, aka non-associated gas, more attractive in Mexico, according to experts such as Juan Carlos Zepeda, former chairman of upstream regulator Comisión Nacional de Hidrocarburos (CNH).

However, Mexico’s private sector natural gas producers have had trouble getting their gas production to market, analyst David Rosales said in a recent webcast event organized by the #WeTweetEnergy collective of energy experts.

What’s more, Mexico is on track to record 19 offshore oil and gas exploration wells drilled in full-year 2020, more than any country in the region including the United States, according to Welligence Energy Analytics’ Offshore Exploration Well Tracker.

In Mexico’s offshore segment, all eyes are on the pending outcome of unitization talks between Pemex and Talos Energy Inc. with respect to the Zama discovery.“Next year needs to see a final investment decision for the Zama prospect and other shallow-water prospects,” George Baker, publisher of the Mexico Energy Intelligence newsletter, told NGI’s Mexico GPI in a recent interview. He added, “A final investment decision for the Trion prospect, which would be Mexico’s first deepwater reservoir to be sanctioned for full development, will require a few more years.”