With another hefty weekly inventory build expected this week, and with analysts pointing to a possible end to the recent short-covering rally, natural gas futures declined at the front of the curve for a second straight session Wednesday. The October Nymex contract settled 2.8 cents lower at $2.552/MMBtu, while November dropped 3.1 cents to $2.589. 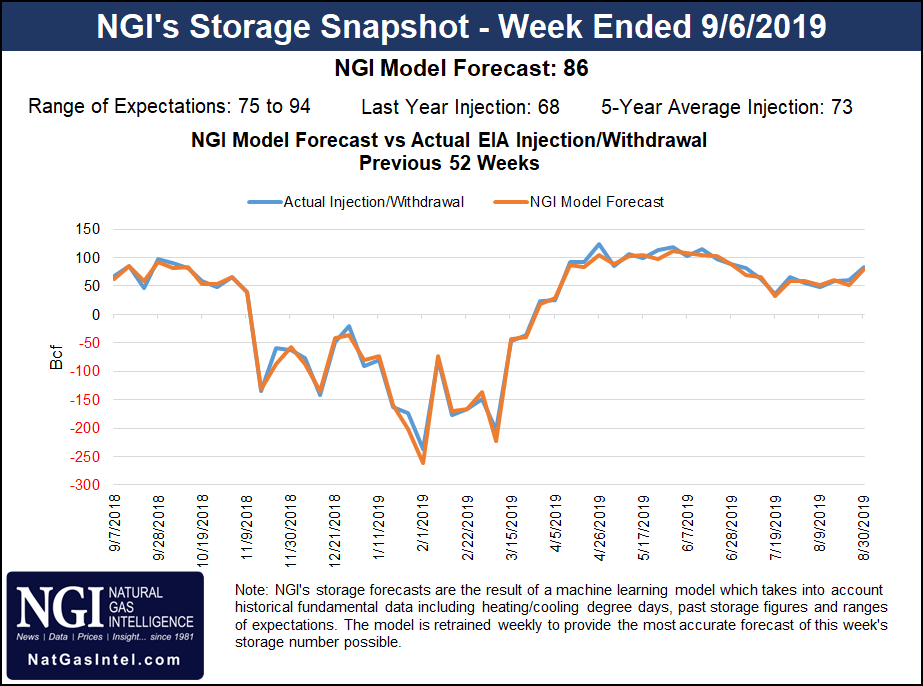 In the spot market, moderating temperatures accompanied discounts in the Northeast and Midwest; the NGI Spot Gas National Avg. slipped 2.5 cents to $2.340.

The intraday reversal for natural gas markets Tuesday may have signalled “the end of the short-squeeze” that has seen prices surge since late August, according to analysts with Tudor, Pickering, Holt & Co. (TPH). This potentially sets up “a correction to the downside, as fundamentals have shown little improvement over the recent rally.”

“Cumulative injections this year are tracking 43% above the five-year average (injections were 37% above average in 2015), despite degree days just 1.8% below norms, as oversupply continues to grip the market,” the TPH analysts said.

Market expectations for Thursday’s EIA storage report, covering the week ended Sept. 6, have been pointing to yet another above-average build.

A Bloomberg survey showed a median prediction for an 81 Bcf build from this week’s report based on 15 estimates ranging from 75 Bcf to 91 Bcf. A Reuters survey pointed to an 82 Bcf injection, with responses from 76 Bcf to 94 Bcf. Intercontinental Exchange EIA Financial Weekly Index futures settled Tuesday at 83 Bcf. NGI’s model predicted an 86 Bcf injection.

Last year, EIA recorded a 68 Bcf injection for the period, and the five-year average is a build of 73 Bcf.

Energy Aspects issued a preliminary estimate of 86 Bcf for this week’s report.

“In spite of the holiday impact from Labor Day (which we estimate at 1 Bcf/d), a 1.4 Bcf/d week/week rise in power burn largely offset” both “weakened industrial demand” due to the holiday “and the moderate rise in production and net Canadian trade,” Energy Aspects said.

It would likely take a bullish surprise from Thursday’s EIA report to push front-month prices back to the $2.600 level, according to Bespoke Weather Services.

“Otherwise, we see more likelihood of a decline back to around the $2.500 level by the end of the week,” Bespoke said. “Current weather remains hot enough to support cash prices, enough to preclude a decline any further than that, in our view, unless” EIA’s report Thursday “shows a build of 90 Bcf or larger, as that would indicate even more looseness than we’ve been factoring in.

“We are forecasting a notable drop in weather demand after next week…as we finally say goodbye to the mid-summer-like heat” that’s expected to linger “for another week or so.”

On the supply side, Lower 48 production has seen a “moderate retreat” since the weekend, according to Genscape Inc. Wednesday’s estimate showed production coming in slightly below 90 Bcf/d, down about 0.9 Bcf/d day/day, driven by declines in the Northeast, the Rockies and the Midcontinent.

“During the weekend, production topped 92 Bcf/d,” Genscape senior natural gas analyst Rick Margolin said. Including Wednesday’s estimate, “month-to-date production is averaging about 91.6 Bcf/d. This is about 0.55 Bcf/d greater than our forecast headed into the month led by outperformance from Texas, West Virginia, northeast Pennsylvania and Ohio producing areas.”

Meanwhile, as of 2 p.m. ET Wednesday, the National Hurricane Center (NHC) was monitoring a disturbance near eastern Cuba and through the southeastern Bahamas that it said had a 40% chance of cyclone formation over the next 48 hours.

“Conditions are forecast to become more favorable for development this week, and a tropical depression could form near the northwestern Bahamas or South Florida as early as Friday,” the NHC said. “Further development is possible over the eastern Gulf of Mexico later this weekend.”

Spot prices eased off from the Midwest to the Northeast Wednesday as temperatures were seen cooling off over northern portions of the Lower 48 to close out the work week. Chicago Citygate dropped 11.5 cents to average $2.370.

Over the next several days, “unseasonably strong high pressure will dominate the southern and eastern/east-central United States with highs of 80s and 90s for strong late-season demand,” NatGasWeather said. “The Northwest, Rockies and Upper Midwest will be unsettled with showers and highs of 60s to 70s for light demand.

“The important corridor from Chicago to New York City will be comfortable to a touch warm with highs of 70s to mid-80s.”

Heat over the southern half of the country should drive above-normal cooling degree day totals for the nation overall, according to the forecaster.

Prices were generally steady over much of Texas, the Gulf Coast and the Southeast regions Wednesday. Transco Zone 4 fell 3.0 cents to $2.615.

Natural gas power burn levels could benefit in the coming weeks as the fall nuclear turnaround season ramps up. That turnaround is already underway, according to Genscape. The firm estimated that as of Wednesday, close to 4.9 GW of nuclear capacity was offline, with planned outages expected to reach 18 GW next month.

“Scheduled outages are expected to climb to a seasonal peak just above 18 GW by Oct. 22,” senior natural gas analyst Rick Margolin said. “If one were to assume a one-to-one gas burn replacement, it would create roughly 3.1 Bcf/d of additional gas demand.”

“In addition, actual gas burn replacement tends to be lower than one-to-one due to lower loads in the fall season along with other fuels contributing to the power stack,” he said.

After selling off in Tuesday’s trading, hubs in California and the Desert Southwest rebounded Wednesday as AccuWeather was looking for temperatures in Los Angeles to heat up heading into the weekend, including highs in the 90s by Friday.

Since Aug. 12, around the time Kinder Morgan revealed that it had started commissioning the GCX line, Waha basis has averaged around minus $1.150. By comparison, between the June 11 and Aug. 9 trade dates, Waha basis averaged minus $1.945.

Since mid-August, when NGI began recording GCX-related transactions as part of its daily spot price survey, Waha basis has traded as close as 58.5 cents back of Henry Hub, with basis generally hovering around minus $1.000-1.500, Daily GPI historical data show.