An outgoing state regulator has proposed that the Arizona Corporation Commission (ACC) eliminate a 22% energy saving goal for electric utilities by 2020 that has been in effect since a 2010 ACC edict. 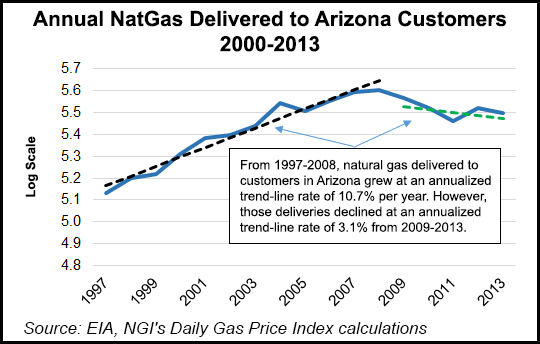 Steven Olea, director of the ACC utilities division, recently submitted proposed changes to the state’s efficiency/demand side management requirements that would affect both gas and electric utilities. He sought comments by last Tuesday.

Outgoing Commissioner Gary Pierce said he would eliminate the 22% goal as part of revamping the private-sector utilities integrated resource plans. Pierce told local news media the 22% goal is “aggressive,” something utilities have told regulators since the target was adopted.

It should be noted that the Arizona ACC set goals for energy savings for natural gas providers at 6% by 2020. Only electric utilities have the higher 22% by 2020 goal.

Jeff Schlegel, the state representative for the Southwest Energy Efficiency Project (SWEEP), thinks the state-mandated efficiency goal has been “productive,” and does not need changing. “[It] has saved utility customers $540 million on utility bills collectively in just the first three years since the standards went into effect,” Schlegel said. “These goals have stimulated a robust industry that helps Arizonans upgrade their businesses and homes through a variety of cost-effective programs.”

The proposed changes would be “a free pass for utilities to give up on energy efficiency,” former ACC Commissioner Kris Mayers wrote in a recent opinion column in the Arizona Republic newspaper in Phoenix. Mayes contends that there is nothing in the ACC record to suggest the standard is not working.

Now chair of the Arizona State University Utility of the Future Center, Mayes was ACC chairman when the efficiency standard was established on a unanimous vote of the regulatory commission four years ago.

Mayes and SWEEP are urging opposition to the proposal. They contend that efficiency is widely recognized as the least expensive way for utilities to meet energy demand, citing costs of 3 cents/kWh to save electricity, compared to 6 cents/kWh for power from the most efficient new natural gas-fired generating plants.

The proposed revisions at the ACC would “eliminate energy savings requirements for utilities, which in turn are expected to reduce or shutter energy savings programs,” a SWEEP spokesperson said.