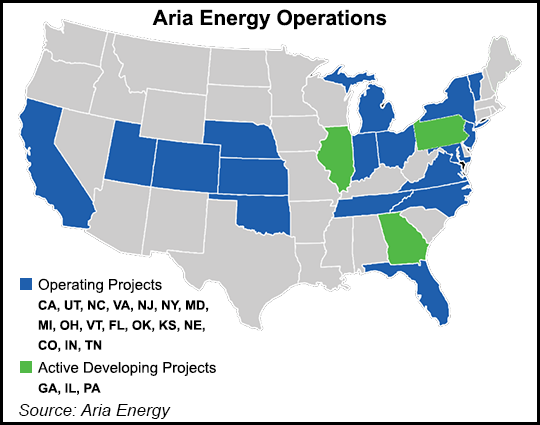 The $1.03 billion deal could create what Rice said would be the leading RNG platform in the United States.

“I think the missing piece to all of it historically has really been the commercial element,” Rice told NGI. “There hasn’t really been long-term demand for this type of product.”

However, RNG demand is growing, as businesses, organizations and governments announce ambitious goals to achieve carbon neutrality, Rice said. RNG is being marketed as a more environmentally palatable alternative to fossil fuels because it is less carbon intensive. Energy heavyweights have recently jumped on the RNG bandwagon, including supermajors BP plc, Chevron Corp.  and Total SE.

Customers are “setting these 10-20 year carbon neutrality goals, and so all of a sudden, you now have 10-20 years of demand that didn’t exist two years ago,” Rice said. In response to the sudden demand, Archaea developed long-term commercial contracts to connect those new customers with RNG.

“When you’re able to provide 10-20 years of cash flow visibility, the business becomes something that long term investors can wrap their heads around and get excited about.”

The combined company would have nine operating RNG projects and 16 projects under development with potential for more than 25 others in the future. A landmark project is a Pennsylvania RNG facility that Rice Acquisition said may be the largest such development in the world, capable of producing up to 5.5 MMBtu/year.

The combined company, which would assume the Archaea name, would focus on carbon sequestration and green hydrogen in addition to converting landfill gas to RNG. It would use existing pipeline infrastructure to transport RNG to customers.

Rice said U.S. landfills currently produce about 1.9 Bcf/d of gas, but only about 13% of it is being captured or converted to RNG. Coalition for RNG CFO David Cox told NGI the figures were in line with the best available data.

“The opportunity that is in just existing landfill waste today is pretty large, and it continues to grow each year,” Rice told NGI.

Landfills can also create a predictable production profile, Rice said, as more waste is added each year and decomposition ramps up.

“It’s the most predictable, because of all the dynamics of how long the landfill will produce for,” he said. “So it’s a baseload fuel, it’s not an intermittent source at all.”

The transaction, scheduled to close by the end of September, would take the combined company public and provide funding to pursue its projects. It would be listed on the New York Stock Exchange under the ticker “LFG.”

Archaea is majority owned by another Rice family venture, Rice Investment Group. The family would be the largest shareholder of the combined company, Rice said. He would have a seat on the board, with Rice Acquisition getting five total.  Archaea CEO Nicholas Stork and Ares Management Corp. principal Scott Parkes will round out the board.

Rice made his name at the helm of Rice Energy Inc., which he founded and ran with his brothers until it was acquired by EQT Corp. in 2017 for $6.7 billion. The deal made EQT the largest natural gas producer in the United States. Brother Toby Rice became CEO in 2019 following a proxy battle.