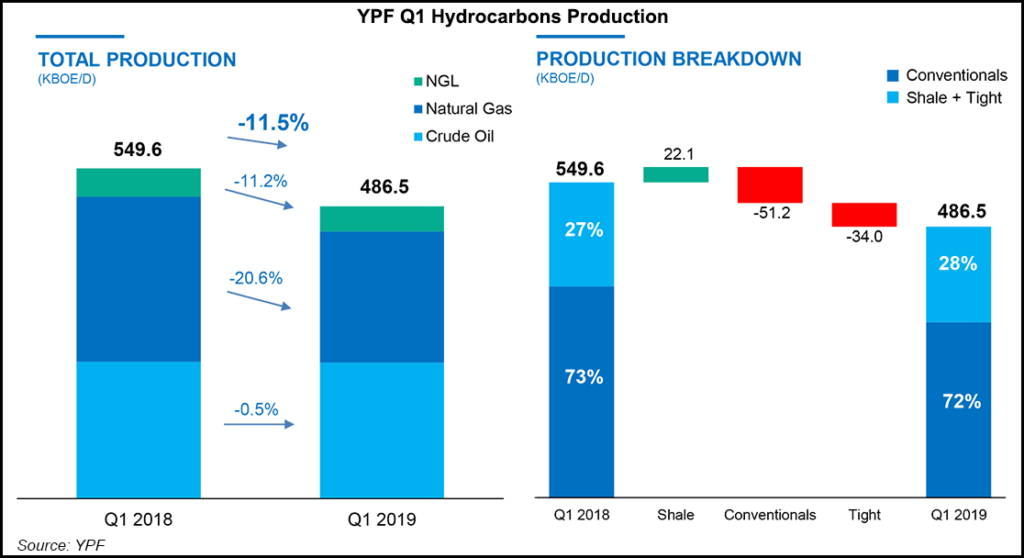 The 51% state-owned firm, which has spearheaded development of the Vaca Muerta shale formation in the Neuquén Basin, was forced to curtail gas output during the first quarter because of “an excess of supply compared to domestic demand,” the company said in its first quarter report.

Subsidized wellhead prices for unconventional gas have spurred investment in shale and tight sand formations in Argentina by YPF and private sector operators that include the Big Oil companies as well as Tecpetrol SA and Pampa Energía SA.

However, the ramp-up of unconventional production has coincided with an economic slowdown in Argentina, where gross domestic product, aka GDP, is expected to shrink for a second straight year in 2019. As a result, the government earlier this year said it would be limiting subsidies for unconventional gas.

Because of the oversupply of gas and subsequent production curtailment, YPF’s gas output fell by 20.6% year/year in 1Q2019, totaling 1.225 Bcf/d. Had it not been for the curtailment, YPF estimated that gas production would only have fallen by 1.3%, investor relations chief Ignacio Rostagno told analysts during the quarterly earnings call.

“Considering this new reality for the gas market that we believe will be there for some time, we took a series of mitigation measures,” Rostagno said. “As a first step, from1Q2019…we are limiting investment in natural gas to just those molecules that we are confident we will be able to sell in the market. In addition, we are activating several short-term and medium-long term levers to increase gas demand.”

These levers include pipeline exports to neighboring Chile, which averaged 45.9 MMcf/d during the quarter and increased to 116.5 MMcf/d during April, Rostagno said.

“Moreover, we will be exporting LNG by the third quarter of this year, representing an additional 2.5 million m3/d,” or 81.2 MMcf/d.

The Tango floating liquefied natural gas (FLNG) barge owned by Belgium-based Exmar NV “is already in place and being commissioned” at the Bahía Blanca port, Rostagno said. YPF plans to provide more details on a larger-scale LNG export project by the end of the year.

Bolivian President Evo Morales said recently his country, which shares a border with Argentina and also exports natural gas, plans to participate in the latter project.

YPF is forecasting full-year capital expenditure (capex) of $3.5 billion in 2019, and a 2-3% decline in hydrocarbon production.

The oversupply of shale and tight gas in Argentina is a sharp contrast to Mexico, where President Andrés Manuel López Obrador has expressed opposition to shale development and postponed upstream auctions for conventional and unconventional onshore gas blocks, despite natural gas shortages that have strained electricity supply in some parts of the country.

Mexican national oil company Petróleos Mexicanos (Pemex), meanwhile, reported a 15% decline in non-associated gas output during the first quarter because of a reallocation of upstream capital to oil production.