Argentina’s YPF SA is aiming to sanction an LNG export project by the end of 2023, according to CFO Alejandro Lew. 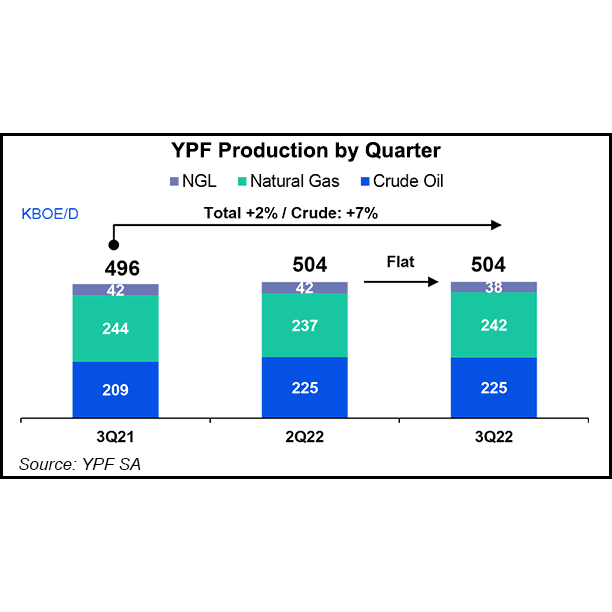 YPF and Malaysian national oil company Petronas signed a memorandum of understanding on Sept. 1 to study the potential for an integrated liquefied natural gas export project in Argentina, home of the Vaca Muerta shale formation.

If the project moves forward, it would “probably require a dedicated gas pipeline,” Lew told analysts. This would be in addition to the Néstor Kirchner natural gas pipeline under development by the government.

Lew said, “we believe that clearly, we have already demonstrated the productivity of Vaca Muerta and the economically viable exploitation of the natural gas resources. But clearly, putting together an LNG plant, a large-scale LNG plant, the way that we are thinking of takes many engineering as well as economic and financial analyses to come up to a final investment decision,” or FID.

YPF and Petronas “expect to have some type of FID decision…hopefully before the end of next year, that will be the timeframe for coming up with a final decision there,” Lew added.

He noted that YPF is not involved in the pipeline’s construction. However, “even though it is challenging…we still believe that they have the ability to have the pipeline up and running” around June 2023 at the start of South America’s winter, Lew said.

The CFO also highlighted a presidential decree earlier this month to expand Plan Gas.Ar, a program to incentivize domestic gas production, through 2028.

The program’s extension, along with the Néstor Kirchner pipeline, should help Argentina to reduce its LNG import needs over the coming years, Lew said. It also “provides further stability and price signaling to continue incentivizing the profitable development of our vast natural gas reserves,” Lew said.

On the upstream front, Lew said YPF management believes “that the improvements in our Vaca Muerta operations primarily present us with a very attractive opportunity to ramp up” capital expenditures (capex) and probably have an even more ambitious capex plan for next year and the years after that.”

Although YPF has not yet finalized its 2023 capital budget, “we do expect capex for the next few years to be somewhat more ambitious than the level that we have seen in 2022 and the one that we are expecting to deploy in 2022 of just over $4 billion.”

YPF reported production of 504,000 boe/d for the third quarter, flat sequentially but up 1.8% year/year.

The figures for shale oil and shale natural gas production told a different story, however, rising by 48% and 22%, respectively, versus the same period last year. YPF produced 604 MMcf/d and 222 MMcf/d natural gas from shale and tight formations, respectively, during 3Q.

The growth was driven by operational improvements in Vaca Muerta, where the company achieved new records for hydraulic fracturing and drilling speeds during the quarter. Shale oil and gas represented 41% of total production during the period, up from 33.4% a year earlier.

YPF’s natural gas production fetched an average price from third parties of $4.4/MMBtu, compared to $4.2/MMBtu a year earlier and $3.9 in the previous quarter. The sequential increase reflected the seasonality factor included in Plan Gas.AR between May and September

YPF posted a tenth consecutive quarter of positive free cash flow, generating $262 million for 3Q and $966 million for the first nine months of the year.