Gas-rich Argentina is back to importing natural gas from two ports with the startup of Excelerate Energy LP’s Exemplar floating storage and regasification unit (FSRU) at Bahía Blanca. 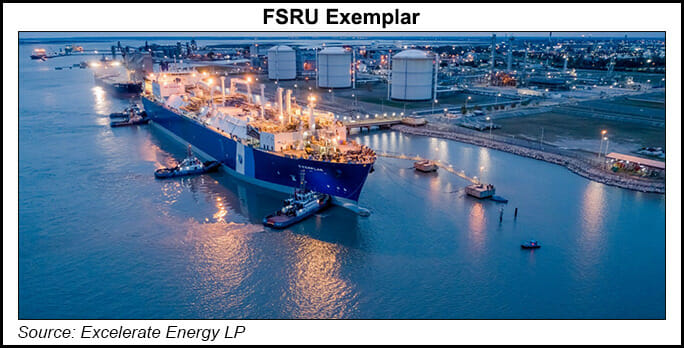 The Exemplar FSRU has storage capacity of 150,900 cubic meters and has been leased for the 2021 winter season in Argentina. It is seen as providing “reliability and stability to the country’s energy system,” CEO Steven Kobos told NGI. He said the contract could extend until September.

Last winter, Argentina’s Integración Energética Argentina (Ieasa) purchased 28 LNG winter cargoes to meet demand. The number of cargoes is expected to rise to at least 37 in the upcoming Southern Cone winter as demand heats up and domestic production continues to lag pre-coronavirus levels.

On the back of higher imports, Argentina’s government in May approved a price hike to the regulated natural gas price distributors are allowed to charge customers. Distributors may now charge 4-7% more for their natural gas.

“We have been looking at some liquefaction options as well,” he said. “Really these are just part of the complexity of the energy system. It’s a useful tool in overall energy balance and reliability and backup.”

Excelerate is “bullish” on Argentina, Kobos said. “We want to invest further in Argentina…Our mariners are Argentine. We employ Argentine mariners around the world. We run South America out of Buenos Aires. We’ve had a very good experience over the years and we are happy with the caliber of talent we can attract and we want to continue our presence and we want to expand.”

Between 2016 and 2020, Argentina reduced its carbon dioxide emissions by about 9.5 million tons through the use of LNG instead of diesel and other liquid fuels, according to Excelerate.