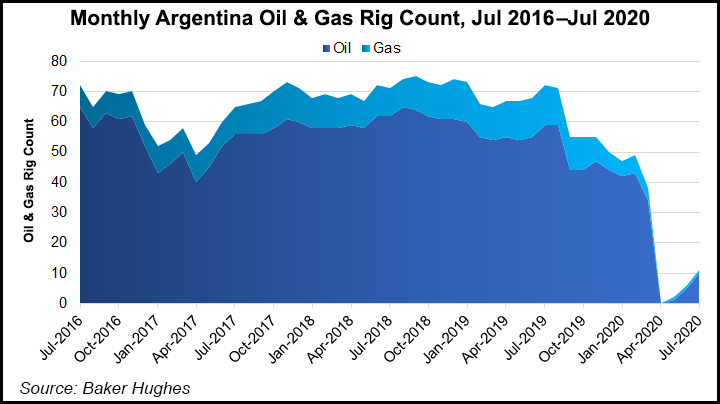 In the presidential residence in Olivos last Thursday, Fernández echoed what he said last year during campaigning. The energy sector was key to the creation of jobs, along with meeting national energy demand and reducing imports, according to a statement from the Economy Ministry. He also called for greater exports of energy to improve the country’s energy trade balance.

But all of that was put on hold as the government changed hands in December, followed by the coronavirus which started spreading in Argentina in March and led to a strict economic shutdown.

In late August, Darío Martínez took over from Sergio Lanziani as the Energy Secretary, the top position in the energy sector.

Martínez was head of the energy committee in the lower house. He previously worked for state energy firm YPF SA, and he hails from Neuquén Province, where most of the world class Vaca Muerta shale deposit is located.

Last week was filled with a flurry of meetings as Martínez aimed to get his energy team together before he travelled to Neuquén on Saturday, according to reports.

Fernández said the nation needed to have both a federal vision of energy and a regional one, including from Neuquén.

The change in position was seen as a way to push ahead with the development of Vaca Muerta, which has stagnated during the coronavirus.

Natural gas production in Argentina decreased by 10% year/year in June to 126 million cubic meters/day (MMm3/d), or 4.45 Bcf/d, according to the Energy Secretariat.

One of the first matters expected to be addressed by Martínez is the country’s gas tender plan aimed at ramping up natural gas production. The proposed tender system would consist of a four-year block auction mechanism starting in October, which would differentiate offers for the peak winter season and the rest of the year, according to the IAE Argentine Energy Institute.

Another shift in the energy sector in Argentina has been that the Energy Secretariat, once the Energy Ministry, now falls under the domain of the Economy Ministry.

On Monday, investors holding 99% of the country’s $65 billion in international debt agreed to a restructuring plan, economy minister Martín Guzman said. This has long been seen as key to lifting an economy that is now in its third straight year of recession. The debt restructuring also is seen as providing clarity for investors in Argentina’s energy sector.