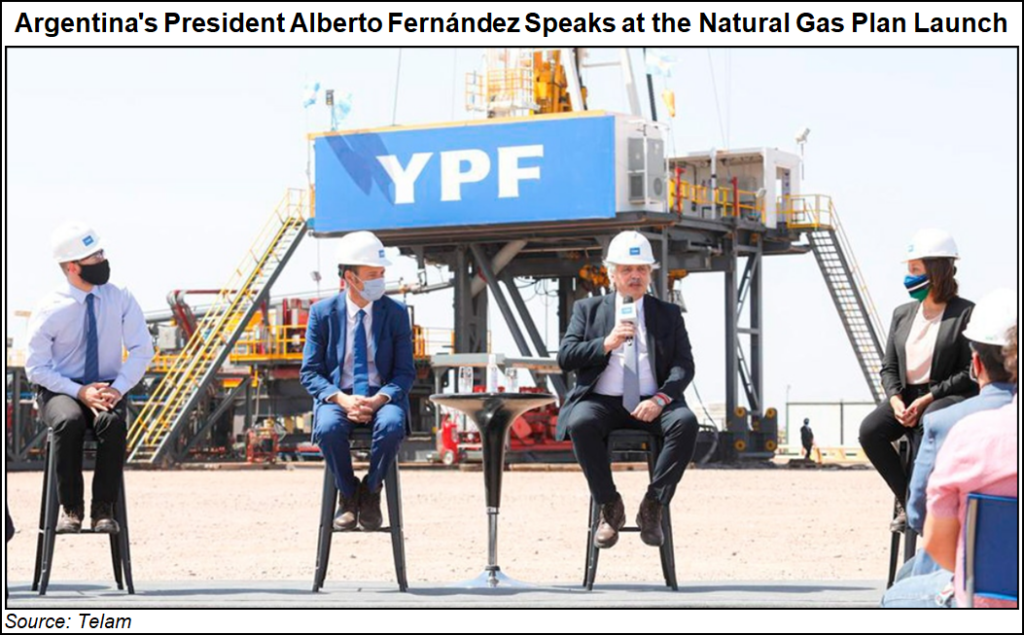 “We’re convinced that we are investing in Argentina for the country’s development,” Fernández said.

The president spoke from the oil and gas fields at Loma Campana, considered one of the flagship developments of Vaca Muerta. Shut-ins there earlier this year were a symbol of a once booming industry slipping into a rut.

Fernández said that spurred by the plan, known as Plan Gas 4, the state producer YPF SA would invest $1.8 billion in gas production over the next three years. The plan would leave the state company “more alive and stronger than ever.

“And not just YPF, imagine what all the other companies can also do here and in the other basins.”

Natural gas production has been in steady decline this year in Argentina due to investment uncertainty in a country facing heavy external debt and mired in a three-year recession. The coronavirus pandemic also slammed the upstream industry, and the country’s rig count fell to zero in April.

“We’re going to put the country back on its feet after it had been badly hurt,” the president said, referring not to the virus but to the previous administration led by business-friendly Mauricio Macri.

Natural gas production in fact grew during Macri’s four years, reaching levels not seen in a decade. In 2018, Argentina began exporting gas again to neighboring countries and in 2019, it contracted a floating liquefied natural gas (LNG) production barge to send out small-scale LNG.

Hydraulic fracturing activity in Vaca Muerta began its dramatic collapse at the end of last year, just at the time the new government assumed power.

As a sign of just how serious Vaca Muerta is now being taken, Fernández said the country’s Energy Secretary, aka its Department of Energy, would move to Neuquén province as part of a “decentralization” push.

The new gas plan is a four-year tender scheme wherein producers would be able to offer natural gas to the market at a price up to $3.70/MMBtu, well over the Henry Hub benchmark, Energy Secretary Darío Martínez said during the event. Martínez, who assumed the role at the end of August, hails from Neúquen and was central to the plan moving ahead after six months of negotiations.

The tenders would total 70 million cubic meters/day, or 2.47 Bcf/d, just over half of current production. The gas plan is to save Argentina $5 billion in imports to cover seasonal demand, officials said.

Vaca Muerta has technically recoverable resources of 308 Tcf of natural gas within 8.6 million acres, according to the U.S. Energy Information Agency (EIA). It is geologically comparable to the Eagle Ford Shale in South Texas, and only 4% of Vaca Muerta’s acreage has entered the development phase so far, according to EIA.

Details of the plan are to be published in the Official Gazette, officials said.