Despite growing domestic gas production from its Vaca Muerta formation and plans to develop large-scale liquefied natural gas (LNG) facilities, Argentina has ordered 11 LNG cargoes for the upcoming Southern Cone winter as prices for the super-chilled fuel continue to suffer from the demand shock of the coronavirus. 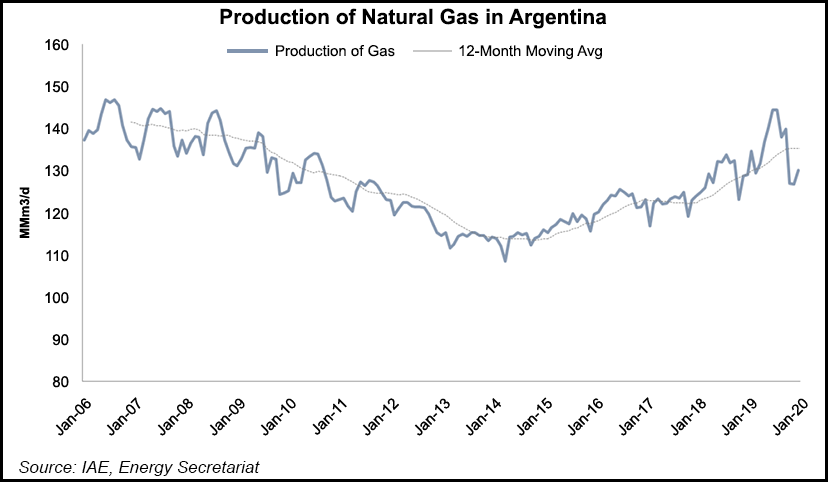 State energy firm Integración Energética Argentina (Ieasa) said prices fetched for the requested shipments “were the lowest recorded in the history of the company” and averaged around $3.00/MMBtu.

“The deacceleration of the Chinese economy meant the Asian giant had to reject LNG cargoes which led to oversupply in the market,” according to an Ieasa statement.

The first shipment is expected for May, the start of the winter.

“First takeaway is a positive one for Argentina, as it has been able to cover winter demand at an average price close to US$3.00/MMBtu,” Wood Mackenzie’s Ignacio Rooney told NGI. “This price is lower if you compare it against previous years, showing the impact of global demand uncertainty and increased competitiveness in the LNG sector.

“Looking to the longer term, when Argentina could become a natural gas exporter, this demonstrates that markets are becoming more competitive and margins for LNG projects could be smaller than what they used to be in the past.”

Because of slowing import needs, Argentina shut one of two gasification terminals in 2018, and now imports only from the Escobar plant in Buenos Aires province.

Argentina received 26 LNG shipments in 2019 to cover winter demand. It also imports gas from Bolivia during the winter, while during warmer months it has started exporting surplus gas to nearby Chile and also to other markets via small-scale LNG.

Shale gas production accounted for 32.5 MMm3/d (1.13 Bcf/d) of the total, up 12.8% from January 2019, according to the latest report on the Argentine energy sector produced by the IAE Argentine Energy Institute.

The majority of January’s natural gas — 81.5 million cubic meters (MMm3) per day (2.88 Bcf/d) — was produced in the western province of Neuquén, where the Vaca Muerta deposit is located. Activity in Vaca Muerta has shown declines since the new government of Alberto Fernández came to power late last year. Drilling activity declined from 43 rigs in August to 29 rigs in December. The number of monthly hydraulic fracturing stages fell from 676 in August to 346 in January.

In 2019, the largest producers of gas in Argentina were state oil company Yacimientos Petroliferos Fiscales (YPF) SA, which produced 41.3 MMm3/d (1.46 Bcf/d) in December, followed by the local subsidiary of France’s Total SA, which produced 33.2 MMm3/d (1.17 Bcf/d). Many of the world’s biggest energy companies have a foothold in Vaca Muerta.

The lack of the pipeline would seriously dent Argentina’s LNG export plans. The country started shipping out small-scale exports last June, the first of its kind. Wood Mackenzie last year saw Argentina LNG ramping in 2024 with production volumes reaching 6 million metric tons/year (mmty) which could grow to 10 mmty by 2030.

Currently Argentina is under a lockdown until March 31 because of the coronavirus pandemic.